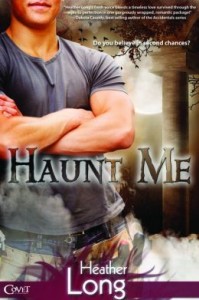 Recently divorced author MacKenzie Dillon has lost her writing mojo. When she inherits her great aunt’s haunted house in Virginia, she is determined to make a new start. The creepy old house provides inspiration but at what cost?

Successful architect and paranormal skeptic Justin Kent returns to Penny Hollow to fulfill his father’s dying wish of revitalizing their small town. To do that, he needs the allegedly haunted estate at Summerfield. Mac, the new owner, may be gorgeous and spunky, but she refuses to sell.

These two have a dangerous history that spans the ages, but will they discover the truth in time to save their lives?

As a paranormal romance, Haunt Me is kind of a ghost romance. It’s not that either the hero or heroine is a ghost, or romancing a ghost, or any of the things usually associated with the phrase “ghost romance”.

Instead, the protagonists are haunted by ghosts who are attempting to finally get things right. Call it an “umpteenth chance at love” story.

As the hauntings continue through the story, even though you know where things are heading, the reader gets the feeling that the ghosts have been waiting for centuries for living people to get close enough to their old story that they have their chance at a happy ending. Or at least a satisfying resolution.

It is a big part of what makes the ending, well, haunting.

But at the beginning, we have Penny Hollow, Virginia, a town that wants to bill itself as the “most haunted town in the U.S.” in order to bring in some much-needed tourist income. It’s not a bad idea, especially since the town really is haunted!

Unfortunately for Justin, when the aged owner dies, instead of leaving the house to the town as promised, she leaves it to her great-niece. And MacKenzie Dillon has no intention of selling out. She needs the house–not just as a home, but also as an inspiration for her stalled writing career.

She also needs the refuge from her abusive ex-husband.

Justin starts out by helping Mac fix up the place. He begins by wanting to buy the place, but decides pretty early on that things with the town will still work out if Mac is willing to allow the house to be used for ghost tours.

Even though his business is in restoring old houses, there’s something about bringing Summerfield back to its former glory that obsesses him.

Just as there is something about being in Summerfield that makes stories absolutely pour out of Mac to the point where she forgets to eat and even sleep. She feels compelled to work on her new historical romance, even though she can’t make it come to a happy ending.

The house wants Mac and Justin to resolve its story. Which ended tragically before, and might very well end tragically again.

Escape Rating B+: Haunt Me has all the elements of a potential tragic romance, along with the charm of a small-town romance with all its busybody fun. The people in Penny Hollow can’t resist interfering in Justin and Mac’s relationship at every turn.

In the end, she uses that knowledge so that it doesn’t use her.

Mac and Justin’s relationship develops slowly, from a position of distrust on her side and overbearingness on his to a sweet love story, but it takes time. Mac is still recovering from a lot of abuse, and its difficult for her to trust. With good reason, her ex is a nasty piece of work. He’s also a necessary player in the story that the house needs to resolve.

The way all the elements swirl together makes Haunt Me a terrifically inventive paranormal romance, where the past and the present blend into a very satisfying ending. 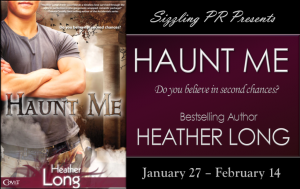 Heather is giving away a $25 Amazon Gift Card. Fantastic! To enter the giveaway just fill out the Rafflecopter below.

3 thoughts on “Review: Haunt Me by Heather Long + Giveaway”