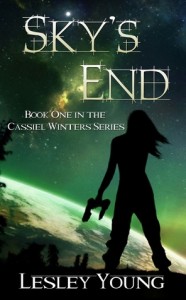 A secret she must never share. A secret that two warring species are determined to control. A universe’s future at stake. Twenty-year-old Cassiel Winters joins Earth’s new space academy in hopes of finding her brother, one of Command’s top pilots and her only family, who’s been reported MIA. But she quickly realizes she may not be cut out for life in space, where female cadets are outnumbered, competition’s fierce, and she’s already failed her hand-to-hand combat test once. Even the station’s most respected officer, Lt. Damian King, probably can’t help Cassiel pass the second time around-so why is he so interested in her progress? If only one of her freaky deja vu visions would offer an answer instead of mysterious messages like hide. When Cassiel’s manipulated into a perilous mission, she encounters a warrior species bred to protect the universe from an even greater threat. And she learns that her secret visions are at the heart of it all. Now Cassiel must fight to control her own destiny and race to save her brother-even if it means pretending to be the pawn of Prime Or’ic, the cold-as-steel Thell’eon leader. Even if it means risking her life, facing hard truths, and making the ultimate sacrifice.

I have to say that Cassiel’s first person point-of-view really sold the story for me. First person is hard to do well, but in this case, being in her head and experiencing her confusion about the world and her naivete is what made the story work. Even when I knew that I should roll my eyes, seeing things through Cassiel’s eyes worked. Her lack of experience with the world and it’s betrayals made the otherwise incredible story make sense.

Cassiel has a secret–sometimes she experiences the future just a few seconds or few hours before it happens. Then she changes it. She thinks of it as an extreme form of deja vu, but she’s also aware that most people will think she’s crazy.

In her future world, Earth, under the auspices of ESE (Earth Space Exploration) is engaged in a long-running interstellar war with the Thell’eons. Her brother Daz is missing in action, after leaving for a mission that no one is willing to admit he’s on. But then, he is in ESE’s equivalent of the spook squad.

So Cassie joins the ESE Academy to make sure that she can hunt her brother down personally, since the ESE doesn’t seem willing to admit he’s lost.

And that’s where the story really begins. Because after Cassie fails her end-of-year exams, she’s given an unprecedented second chance, which is also rigged for failure. And finally, the ESE has her where they really want her; willing to do anything to stay in the ESE. Including let herself be captured by the Thell’eons.

Who seem to have made it part of their ongoing mission to capture human females, supposedly because Thell’eon females don’t enjoy sex, and human women do.

Of course, their society is way more complicated than that. But then, the ESE is nothing like it seems, either.

Everyone wants to use Cassie for something. The Thell’eons, the ESE, and even the man who claims to want to protect her.

It’s only when Cassie finally discovers who and what she really is that she starts questioning whether she should be using them for her own ends.

If she can figure out which of the possible futures she sees is the best one–for everyone.

Escape Rating B: No one is exactly what they seem, and that’s a lesson that Cassie spends the whole book learning. By seeing things from inside her head, we’re able to understand why she doesn’t get how much she’s being used; she doesn’t have the experience yet to be as cynical as she should be. And she truly wants to believe the best of everyone.

Too many of the men who Cassie deals with tend to fall in love with her, or at least become very protective very quickly. It’s explained in the story by the reason why so few females remain cadets in the ESE, and by the way that the Thell’eon society is structured. It’s a bit of “handwavium” but it’s consistent in the story.

Also Cassie doesn’t know how valuable she is to both war efforts. At the beginning, she doesn’t even know the true nature of the war, and what her deja vu gift really is. Or how it makes her a target.

So the story is Cassie’s journey of discovery, and some of that discovery concerns her own sexuality. One man seems to love her, and one alien wants her for the war effort. She’s still in the process of figuring out whether either of them wants her for herself, but her experimentation is as emotional as it is physical.

Be prepared for an ending that leaves a lot of loose ends dangling. Cassie spends a lot of this book being a pawn for the various sides in the war, but by the end she finally realizes that she needs to decide where she belongs, and where she can do the most good.

A question which is much, much bigger at the end than she ever imagined. 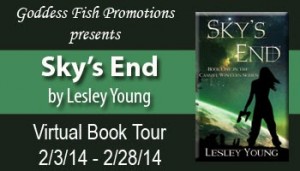 One thought on “Review: Sky’s End by Lesley Young”