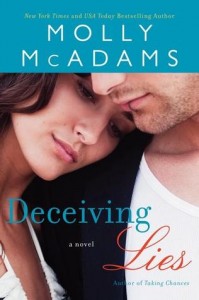 Rachel is supposed to be planning her wedding to Kash, the love of her life. After the crazy year they’ve had, she’s ready to settle down and live a completely normal life. Well, as normal as it can be. But there’s something else waiting—something threatening to tear them apart.

Kash is ready for it all with Rach. Especially if all includes having a football team of babies with his future wife. With his line of work, he knows how short life can be, and doesn’t want to waste another minute of theirs. But now his past as an undercover narcotics agent has come back to haunt him … and it’s the girl he loves who’s caught in the middle.

Trent Cruz’s orders are clear: take the girl. But there’s something about this girl that has him changing the rules and playing a dangerous game to keep her safe. When his time as Rachel’s protector runs out, he will turn his back on the only life he’s known, and risk everything, if it means getting her out alive. 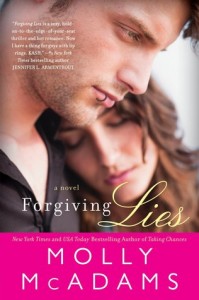 Forgiving Lies ends with a horrible cliffhanger. After Rachel and Kash have finally worked through most of their issues, and are getting ready for their wedding, Rachel is kidnapped by members of the gang that Kash and Mason broke apart before the beginning of Forgiving Lies. Fear of revenge by the gang members still on the outside is the reason that the two undercover cops where in Texas in the first place. They were laying low until the case back in Florida was wrapped up.

So Forgiving Lies ends with Rachel kidnapped and Kash immediately going out of his mind at her loss.

But Deceiving Lies does not start with the kidnapping. It starts a few weeks before the kidnapping, so we can see the happy preparations again. While it was good stage setting, I kept waiting for the other shoe to drop, because that upcoming abduction was looming in the back of my mind like a dark cloud.

At 16% into the book (thank you kindle app) we finally get that fall off the cliff we’ve been waiting for. Rachel is taken and Kash, predictably, starts going bonkers.

Most of the story is told from Kash’ and Rachel’s alternating points of view. So we switch from Rachel’s imprisonment, and her feelings about those events, to Kash trying to find her.

Rachel is held captive for well over a month. More than long enough for her to develop a weird relationship with the man who both kidnapped her and is protecting her from the other members of his gang. While she doesn’t fall in love with Trent, she comes to rely on him and see him as her protector and refuge against the rest of the gang. While it may not have exactly been Stockholm Syndrome, it felt at least partway there.

Meanwhile Kash and the police are receiving faked video that Rachel is being tortured. As the search goes on, and nothing breaks, Kash goes seriously bad cop. He takes on his undercover hardass persona. even though he’s not undercover. He disintegrates into someone that Rachel might not recognize when she is finally rescued.

Neither of them is the same person they were when Rachel was taken. The question is whether they can find their way back; to being someone who is still capable of loving and being loved by the other person. Can they navigate toward a new future, because they can’t go back to the way things were.

Escape Rating C+: After a fluffy beginning, this is a very dark book. It also doesn’t quite feel like it had a happy ending. It has a resolution on the way to happiness, but it didn’t feel quite happy to me.

There is so much angst in this story while Kash and Rachel are separated, and that takes up a huge part of the book. It may have been necessary for the story, but it was hard to read through. If I hadn’t wanted to find out how things got resolved in the end, I might have stopped, just to get out of the darkness.

The is it/isn’t it/what is it debate about whether or not Rachel was suffering from Stockholm Syndrome, and exactly what her feelings were for her captor/protector Trent, went into the crazysauce. Rachel did not have to fall in love with Trent in order to be exhibiting Stockholm Syndrome. Having Stockholm Syndrome just means that she felt empathy and sympathy toward her captor and had positive feelings for him. Which she did, because he protected her from the really bad guys.

A part of me wishes that Rachel and Kash had gotten their happy ending at the end of Forgiving Lies. Rachel had already been through quite enough for one lifetime. But after the cliffhanger ending, I’m glad I read Deceiving Lies so that I could see them finally have their chance at happiness.

If there is a next book in this series, I hope that it features Kash’ partner Mason. Or even Trent. I just don’t want to see Rachel suffer any more.