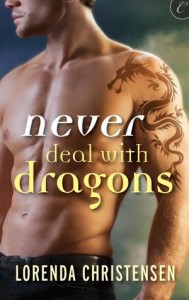 Consoling a sobbing dragon and serving pig buffets are just part of the job for Myrna Banks. Working for a mediation firm, it’s her job to get humans compensated for damages caused by the dragons who now rule. But her “typical” day is interrupted by Trian Chobardan, an old flame who sneaked out of her bed two years ago, taking her heart and a handful of classified documents with him.

Myrna would love to show Trian the door, but he’s been sent by North America’s reigning dragon lord for help negotiating a truce with a powerful rival to avert war. Myrna agrees to help, even though she’ll be stuck with Trian as a partner.

As the two work together, Myrna finds Trian to be surprisingly supportive—and still irresistibly attractive. Though her brain tells her not to forget his betrayal, her body feels differently. When they learn the enemy dragon lord is planning something no one could have imagined, Myrna has to learn who she can trust before she loses not only her heart, but her life.

I picked this one up because Cass liked it. The idea that Cass liked anything with even a smidgen of romance made this one too tempting to resist.

Never Deal with Dragons turned out to be way too much fun for a story that starts after World War III, but then, the causes (and effects) of that war are all part of what makes this story such a blast.

Somebody really screwed up genetic manipulation, and instead of curing cancer, they created dragons by accident. That’s one heck of an accident, especially since those brand new dragons got such an interesting mix of genes that they are pretty much indestructible, at least by anything that humans can cook up.

Mankind is no longer the apex predator on Earth. The societal consequences are enormous. If it weren’t for the fact that dragons find us useful (we farm, they don’t), the dragons would probably have wiped us out in a heartbeat.

Especially since the results of that war include global cooling and a nearly complete breakdown of telecommunications due to too much EMP radiation. We’ve lost a lot of history and communication, and everyone wants to live in the new temperate zones, which have shrunk and moved towards the equator.

This is only the beginning of the worldbuilding, which is fantastic as well as incredibly well thought out.

Our heroine is a dragon mediator. She speaks dragon. The lord dragon of North America prefers to negotiate rather than fight or enslave when there’s a dispute between dragons and humans, such as when a dragon eats a bunch of cows without asking permission first. Smoothing over everyone’s feathers and scales is definitely required.

But Myrna Banks is stuck in a dead end secretarial job (to an asshat boss) because even though she is one of the few dragonspeakers, she lost some confidential documents a couple of years ago. She says she lost them, but her ex-lover actually stole them, on his way out the door in the middle of the night.

Trian Chobardan is back, and with a job offer. It turns out he works for that reigning dragon lord, and Lord Relobu wants a dragonspeaker to mediate between himself and the crazy-but-powerful Dragon Lord of China.

Myrna sees the mission as her chance to get out of her dead-end job and back onto the fast-track. She just has to ignore her still-definitely-simmering attraction to Trian–and all the dragons who suddenly want to kill her.

Escape Rating A: This one is all about the dragons, and the new society that is created in their wake. And it’s awesome.

The reactions of the people involved in this thing are just so much fun, even when the people are dragons.

Myrna is in such an interesting position, because even though her talents are needed, there are a lot of humans who don’t want to admit that the world has changed. They hate dragons, and therefore undervalue anyone who can communicate with them. There’s an element of human society that thinks they can go back to the “good old days” if they just manage to eliminate the dragons. This is so short-sighted, because they don’t have a way to get rid of all the dragons, and because things never go back to the way they used to be. That genie is long past out of the bottle. (Yes, I see it as a commentary on current society, as always, your mileage may vary)

I liked Myrna a lot. She’s a great point of view character because she understands both sides. And because she’s a mediator and negotiator rather than a warrior. It’s marvelous to see someone who fights with their brains first as the heroine.

I also liked that, as much as she’s still attracted to Trian, they don’t get back together until he comes clean about his betrayal, his disappearance from her life, and his true identity. He has to rebuild her trust, and it takes the entire story for that to happen. And so it should.

One thought on “Review: Never Deal with Dragons by Lorenda Christensen”