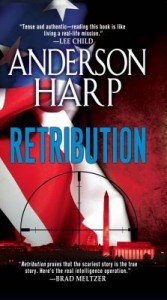 The remote and impenetrable Pakistani mountains have offered refuge to the worst enemies of civilization since the time of Alexander. Now, the world faces a new challenge. Reared from birth to harbor a seething hatred, a lone man is about to unleash a firestorm that will rage for centuries. And the window of opportunity to stop him is shutting much faster than Washington D.C. can hope to deal with.

If you’re looking for a way to get your Tom Clancy fix, Retribution is a great place to start!

I read the early Tom Clancy books, and loved the fast pace of the adventure, as well as the neverending skullduggery involved in the politics, but the later books felt a bit bogged down to me.

The action in Retribution never lets up.

Although the story focuses on ex-Marine William Parker, the point of view switches between Parker, the man he is hunting, and the politicians who want to make sure that there are no loose ends when his mission is completed.

Retribution is a complicated story, because “retribution” is something that every character seems to want–they just have wildly different perspectives on who should get retribution for what.

The plot and counter-plot revolve around a man who wants to become a second Osama bin Laden, but his ambitions are greater. The goal of Yousef al-Qadi’s jihad is to recreate a mythical pure Muslim kingdom in parts of Afghanistan and Pakistan, without giving a damn about the governments that currently hold those territories. He also wants to wipe out the Western influences from Saudi Arabia and its rulers.

He already has an army, he’s planning to use that army to steal nuclear material from Pakistan and hold the world hostage.

The plan that William Parker comes up with to eliminate the threat is equally as deadly; Parker plans to infiltrate Yousef’s inner circle and expose everyone in it to a disease as deadly as the black plague, and nearly as infectious.

Getting in turns out to be much easier than getting out; especially since there are plans back in Washington to make sure that Parker doesn’t survive his mission. And there are forces in Yousef’s camp willing to do anything to ensure that Parker pays in blood for his acts.

Escape Rating B+: Parker is a great point of view character not just because he is so good at what he does, but because his reasons for doing it are so complex.

He is an adrenaline junkie who still takes missions just to feed that particular habit. He’s also intelligent and multi-talented, that’s what makes him both a hero and a survivor. But this particular mission has a goal for him beyond removal of the threat. His parents went down on Pan Am Flight 103, over Lockerbie Scotland. His reward for the Yousef mission is to find out the unvarnished truth about the Lockerbie bombing conspiracy, by seeing the secret and unredacted U.S. Government files.

It’s the one mystery he’s never been able to solve, and he needs to know–even if the truth includes culpability on the part of the government he serves.

If Parker is a bit larger than life, so is Yousef. It’s difficult to know whether his particular jihad, or the reasons behind it, have a basis in a real person; I definitely saw him as a threat, but his character felt more like an amalgam of possible dangers than a complete character. (YMMV)

The last third of the book goes along at a “can’t stop reading” level of adrenaline, especially as the action focuses in on the actual mission and relatively few characters. In the beginning, when a large number of people and a lot of background are thrown at the reader all at once, I would have killed for a dramatis personae list.

By the end, I was practically biting my fingernails to see if Parker’s mission succeeds, and the various missions to stop him are finally foiled.