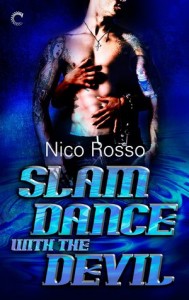 All those wild rock stars you hear about? Some of them really are demons, sustained by the energy pouring off the audience…

Wild, destructive and immortal, rocker Kent Gaol has given up the search for his Muse—a demon’s one true source of inspiration, his forever partner. After losing the one woman he thought might be his, he’s convinced she doesn’t exist.

Hard-as-nails private investigator Nona Harris has been hired by a mysterious client to track Kent. She knows nothing of his truths, until one night when Kent tricks her on stage during one of his concerts. Amazingly, she not only senses the energy around the demons, she feeds from it…and it turns her on.

Kent never expected Nona’s response to be so intense, nor that she could enter his world and so thoroughly rock it. This is beyond a tumultuous love affair—this is a sexual and emotional bond that will change them both forever. A bond strong enough that now Nona’s shady client wants them both dead…

How many demons does it take to make a rock and roll band? In Slam Dance with the Devil, the hit band Arc Map has three, Kent on bass, Isis on guitar and Unger playing the drums. They go from concert to concert, playing gig after gig so they can soak up the energy from the audience.

Literally. They are demons who feed on that energy, and they’ve been feeding on their audiences since humankind made music by beating on rocks.

It’s a nomadic life, and has been for millennia. They’ve played every kind of music that has ever been. The demons that don’t manage to reinvent themselves and change with the audiences, die of hunger.

Every demon is supposed to have one Muse that changes everything. Once they find their Muse, they can only feed from that one person. They live together, or they die apart.

In Heavy Metal Heart (see review), Trevor Sands finds his Muse. His music gets better, but the revelation that Muses are real and not just myth strikes ripples through all of the other demons, and their enemies, the Philosophers.

That’s where private investigator Nona Harris comes in. She’s been sent by a client she’s never met to follow Arc Map and particularly Kent Gaol. She’s been told that a family wants to make sure he is paid back for the heartbreak he dealt to their child Lorena. Nona figures that if she follows the band, eventually Kent will trip up and do something illegal, and she’ll be there to nab him.

She’s had cases like that before, where someone thinks they are too rich and famous to be held accountable. Nona usually proves otherwise.

But when she catches up with Kent, she discovers that he’s not like her other cases, and not just because she finds him intensely sexy. Even as he challenges her, something about the darkness she sees in him makes her think that her case isn’t what she thought it was.

She sees grief and not guilt, and finds herself filled with doubt as well as distraction.

Then she is lured onstage during one of Arc Map’s concerts, and she sees the energy of the audience raining down on the band; and on herself. Her world is not what she thought it was.

And she discovers that she’s been searching for Kent all her life. She just never knew what he was–until now.

Both of them resist the almost gravimetric pull they have towards each other. Nona because she starts out believing that Kent is scum, and Kent because he believes that the woman who should have been his Muse is already dead–murdered by the Philosophers.

The war between the Philosophers and the demons is all about order vs chaos. While that may sound like good vs evil, it’s actually not. Order can be so rigid as to suppress life, and chaos, in the right dose, is more about change and growth.

Because Nona’s life is all about delivering justice, she starts out being all about order and rules. The Philosophers use that to get to her, and it almost works. They lose in the end because Nona is all about truth, and they lied to her to get her to do what they wanted.

This world of demon rockers and their muses puts a whole new spin on rock and roll. As an alternate version of history, let’s just say it gives a whole different beat, and a compelling one, to alt-rock.