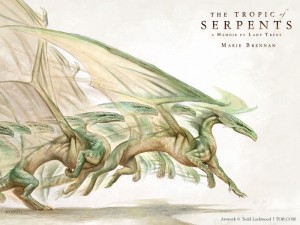 Attentive readers of Lady Trent’s earlier memoir, A Natural History of Dragons, are already familiar with how a bookish and determined young woman named Isabella first set out on the historic course that would one day lead her to becoming the world’s premier dragon naturalist. Now, in this remarkably candid second volume, Lady Trent looks back at the next stage of her illustrious (and occasionally scandalous) career.

Three years after her fateful journeys through the forbidding mountains of Vystrana, Mrs. Camherst defies family and convention to embark on an expedition to the war-torn continent of Eriga, home of such exotic draconian species as the grass-dwelling snakes of the savannah, arboreal tree snakes, and, most elusive of all, the legendary swamp-wyrms of the tropics.

The expedition is not an easy one. Accompanied by both an old associate and a runaway heiress, Isabella must brave oppressive heat, merciless fevers, palace intrigues, gossip, and other hazards in order to satisfy her boundless fascination with all things draconian, even if it means venturing deep into the forbidden jungle known as the Green Hell . . . where her courage, resourcefulness, and scientific curiosity will be tested as never before.

I previously declared A Natural History of Dragons to be the literary embodiment of draconic perfection, and gave it 15/5 stars. As you can imagine I was a wee bit excited for The Tropic of Serpents.

As always I am rather less eloquent when I love something, since I would really rather just wave the book around demanding that everyone READ NOW READ DRAGONS RAWR READ!!!! I believe this failing is a byproduct of my profession. I spend so much of my life writing legal pleadings about horrible things that never should have happened, that I continuously suffer from writer’s block when it’s time to be positive. Alas, I shall do my best….

It’s been three years since the events of A Natural History of Dragons, and our intrepid Isabella has grown up a bit. My one major problem with her character last time around was that she was so feminist, and yet so utterly clueless regarding her own privilege as a titled heterosexual married white person. With a few years’ seasoning as a widow, she’s finally opened her eyes to the inherit injustices in both the classist and imperialist natures of her society.

One of my favorite scenes in the book involved Isabella having a heart-to-heart chat with Tom Wilker (the aspiring naturalist she clashed heads with in Book 1 – she was always looking down on his lower-class roots, while he disdained her for her gender), where they honestly assessed the advantages and disadvantages of their respective class and gender lines, and made plans to unite against the oppression of the 1%. For science!

It was amazing, and I look forward to seeing these two defying conventions and pissing off the upperclass with their brilliance and adventures throughout the series. 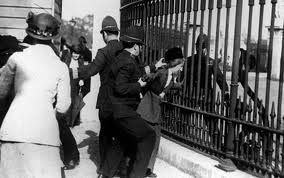 In sum, Isabella’s experiences have matured her beyond the dragon-obsessed teenager into a truly brilliant naturalist. She’s applying her observational and deductive skills to her own life, and finally gaining awareness that though she is devoted to science, her position as a Lady Scientist makes her a politically-divise figure and social rebel.

Our Dragon-Studying-Scooby-Gang is just as engaging as the future Lady Trent. You will come to deeply love Tom (now that he’s pulled the stick out of his ass), and Natalie, the young socialite Isabella is proving to be a horrible influence on. (Though, to be fair, Natalie is an equally terrible influence on Isabella. It’s Natalie-the-theoretical-physicist whose passion is inventing air travel.) My fascination with their adventures was such that I worried about them even when faced with Amazing Draconic Discoveries.

Which leads me to the DRAGONS! We learned a ton about dragons in this book. Breeding cycles. Habitats. The Care and Feeding of. Potentials for Militarization. Stay-up-all-night-reading levels of excitement, and I cannot wait to read about the fall-out in the next book!

Which leads me to my primary disappointment. (Come on, you didn’t think I’d find something flawless, did you?) What the bloody hell was with the illustrations?! Todd Lockwood does amazing work, but, come ON. I don’t care what Natalie or Ankumata look like. I am disinterested in elephants or city skylines. Give. Me. More. Dragons! Every sketch wasted on something not at least tangentially draconic was a throbbing eyesore I cannot get past.

Escape Rating: A+. For reasons I cannot quite explain, I did not love A Tropic of Serpents as passionately as A Natural History of Dragons. It is still, by far, one of the best dragon books out there, and I am already drooling with anticipation over the next installment – so you’d all damn well better go out there and buy as many copies as your budgets can justify  – but I don’t quite feel the need to break Reading Reality’s grading scale. This time. I have every expectation that I’ll be breaking out the Greek Alphabet when grading future installments. Particularly in light of this little teaser:

As I have not yet finished composing my memoirs, I cannot say with certainty that this, the second volume in the series, will be the most gossip-ridden of them all. That honour may belong to a later period in my life, before my second marriage, when my interactions with my future husband were grist for a very energetic mill both at home and abroad. I am still considering how much of that I will share. But this volume will be a fair contender, as it was during these years that I found myself accused of fornication, high treason, and status as the worst mother in all of Scirland. It is rather more than most women manage in their lives, and I own that I take a perverse sort of pride in the achievement.