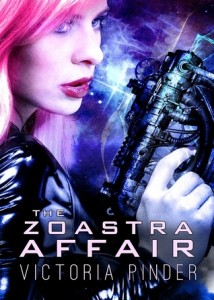 A hundred years from now, Earth has trading partners with alien beings, mostly humanoid. However, going into space has brought forth an unknown enemy who attacks Earth at will.

The Zoastra are part of the Earthseekers, an organization originally designed to go into space. Its new mission is to find Earth’s enemies.

Ariel, stuck on a Victorian planet, steals Grace’s body in order to get off the planet. Now Grace must get her body back before Ariel bonds with Grace’s husband, Peter. Then there is Cross, the man on a mission to find those who killed his family. Ariel is attracted to Cross, but she’s stolen someone’s life. What can she do?

The Zoastra Affair is science fiction romance at the space opera end of the spectrum, but the emphasis is squarely on the romantic aspects of this story.

It also feels like there is a certain amount of wish-fulfillment fantasy mixed in, but that’s not a bad thing. The Zoastra Affair is the kind of mind-candy that is worth getting into, just for the fun.

The Zoastra is a ship. It’s an Earthseekers space ship, and the Earthseekers are heading out into deep space to put some hurt on the aliens who did a fly-by and carved up a whole chunk of North America. They’re out for payback, but they aren’t exactly sure who they are paying back.

Their last stop before they go “where no Earthseeker has gone before” is a hospitality planet populated by the Sheratons. Yes, like the hotel chain. The Sheratons look human but aren’t, and that where the weird gets into the romance.

Sheratons mate for life. Females have a biological imperative to mate at age 18, and once mated, the relationship between husbands and wives is symbiotic–they must have sex every week, or they will die.. (It’s fair that the compulsion hits both sexes, but not the way that females are forced to marry someone, anyone, at maturity).

The officers of the Zoastra include Peter Newman and his wife Grace. Peter is on the command track and Grace is a scientist. Their marriage is suffering a strain because they are both working way too many hours and not making time for each other.

Trouble arrives (it actually flies away with them) when Grace goes with the females of the greeting party to take part in a spa day and massage. There is one detail about the Sheratons that everyone believes is a myth; a small percentage of the population can switch bodies.

Ariel is inhabiting the body of a teenaged Sheraton because said Sheraton switched bodies with her against her will four years ago. She just wants to get back to her home society, to be of use rather than ornamentation, and before the hinted at mating bond is forced on her.

So she forces a body-switch with Grace, abandoning her on Sheraton in the body of a pink-haired 18 year old.

While Ariel is pretending to be Grace on the ship and with Grace’s husband, Grace is back on Sheraton, stealing a shuttle so she can get back home.

Grace’s return in the wrong body sets off a whole chain of events, which not only reveal Ariel’s subterfuge, but ultimately provide Earthforce with a whole new array of weapons against their enemies.

But first, Ariel has to give Grace her life (and her body) back. And Ariel has to find a mate she can bond with, because she is with Earthforce for good.

Escape Rating B-: There is quite of bit of highly improbable fun in this story. Sheraton females are tiny and pink-haired, so both Ariel and Grace are disgusted with the body they have to inhabit.

Ariel is endlessly guilty (and so she should be) for stealing Grace’s life in the same way that hers was stolen. Grace quite rightly points out that Ariel could have stolen a ship the way Grace did, rather than wait for an unsuspecting victim.

But it’s once the bodies are switched back that the real fun begins. It’s not just that Ariel needs to find a mate, but that whatever is compelling her to do so is also affecting the one man on the ship who swore that he would never remarry. Ariel spends a lot of her off-duty time in the processing of training the least civilized man on the ship.

She spends the rest of her time revamping the engines, and trying to gain (or regain) the trust of everyone around her.

The plot of this romance is completely frothy, and as sweet in its way as the bubble gum that Ariel’s hair reminds me of. If you like your science fiction romance very light on the SF and coming to a love conquers all conclusion, The Zoastra Affair may be just your cotton candy. 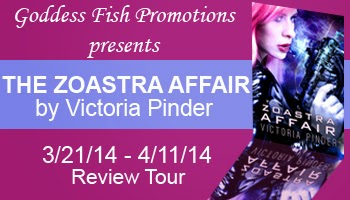 Victoria is giving away a $10 Amazon gift card to one random commenter on this tour. To enter, just fill out the rafflecopter below:

14 thoughts on “Review: The Zoastra Affair by Victoria Pinder + Giveaway”