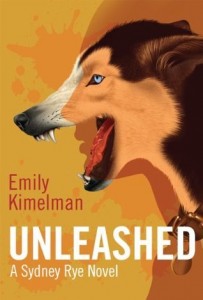 The Sydney Rye series of mysteries features a strong female protagonist and her rescue dog, Blue. This series is recommended for the 18+ who enjoy some violence, don’t mind dirty language, and are up for a dash of sex. Not to mention an awesome, rollicking good mystery!

When the series begins Sydney Rye is named Joy Humbolt. She does not like people telling her what to do, so it comes as no surprise that she was just fired from her last job. When she buys Charlene Miller’s dog-walking business on Manhattan’s exclusive upper east side, it seems like the perfect fit: Quiet environment, minimal contact with people.

But then one of her clients turns up dead, and Charlene disappears. Rumors say Charlene was having an affair with the victim–and of course, everyone assumes Joy must know where she is. Joy begins to look into the crime, first out of curiosity then out of anger when there is another murder and threats start to come her way.

When police detective Mulberry is assigned to the case, Joy finds a kindred spirit–cynical and none-too-fond of the human race. As they dig deep into the secrets of Manhattan’s elite, they not only get closer to the killer but also to a point of no return. One last murder sends Joy Humbolt hurtling over the edge. Her only chance of survival is to become Sydney Rye.

I’m still trying to figure this one out. That’s not a bad thing–I pretty much read it in one sitting. The story does take the reader on a very crazy trip through both the upside and the downside of New York City–but it never lets go once it has you in its grip. Or Blue’s grip, as the case might be.

Unleashed is “the making of the heroine” story for Sydney Rye, who does not start out the story being named Sydney Rye. Unleashed is how she gets her life messed up and becomes the person she was meant to be.

It starts when she gets fired and breaks up with her boyfriend, and neither of those events is much of a loss, except for the income. Her boyfriend doesn’t really seem into her, and she’s not into her job.

A barista who mostly hates people and can’t manage to hide it is in for a very short career. Joy Humbolt, and that’s Sydney’s real name, Joy Humbolt, isn’t very joyful. She does have a knack for getting herself in trouble, starting with screaming at her last customer and her boss at the coffee place.

And we’re off to the races.

Despite what TV may show, not many dog walkers find dead bodies on their rounds. And in real life, those who do probably try to forget as fast as possible.

Joy, on the other hand, can’t resist getting involved, especially when she realizes that she’s seen the dead man before. She hasn’t met him, but she has seen his photo in the house of one of her dogs. He’s one of her employers, a coincidence that the police can’t manage to let go.

And neither can Joy, especially as she turns from possible suspect to confidante of the widow. As the bizarre coincidences pile up, Joy pokes her nose into the business of everyone who might have a piece of the puzzle. She shouldn’t, and she knows she shouldn’t, but she can’t stop herself from getting in deeper and deeper, not just into the plot but also into the tunnels under New York City.

She thought that finding a dead body was trauma enough, but she doesn’t know how crazy, how deep, or how tragic things can get before she’s had enough. But by then it’s far too late for her to get out of the mess.

Escape Rating B-:Joy is nosier than one of the dogs she walks. She also seems to have a keen disregard for most of the social rules (and some of the legal ones) that govern most people’s behavior. It’s not just that she’s quirky, Joy really doesn’t like people much, except for a chosen very few.

She also a conspiracy theorist’s dream–in Joy’s life, it turns out that everything really is connected, even if it doesn’t start out that way. Even more interesting, the cop who starts out investigating her ends up as an ally of sorts, or at least their dislike of most humans and their equally suspicious natures form a weird kind of bond.

Neither of them can resist pursuing a case, no matter how dangerous or how often they are told to get out.

The fun in the story was Joy’s discovery of the tunnels under the city, and the way that fit into both the murder and the conspiracy she eventually uncovers. (There are tunnels under Chicago, why not New York?)

I did find the identity of the ultimate conspirator slightly over the top. It added to the crazysauce fun of the story, but spilled the plot just one tick over from mystery to fantasy.

However, I absolutely adored Joy’s dog Blue. He turns out to be the perfect friend and protector, just when she needs him most.

Choose the Voice of Sydney Rye

Sydney Rye is coming to Audio and we need your help picking the narrator!

Emily Kimelman’s “Sydney Rye” series features a strong female protagonist and her rescue dog, Blue. It is recommended for the 18+ who enjoy some violence, don’t mind dirty language, and are up for a dash of sex. Not to mention an awesome, rollicking good mystery!

Haven’t read Sydney Rye yet? Download the first book, UNLEASHED, for free on Amazon, iTunes, B&N, or Kobo and see how she sounds in your head then vote for the best narrator!

Voting enters you to win all sorts of great prizes including Amazon gift cards, signed books, and the finished Audio book! Add to your chances of winning by joining Emily’s email list, liking her Facebook page, or telling your friends about the contest.

Here are your choices:

Bio:
Emily Strong is an actor, voiceover talent, and first time filmmaker. As a native of Michigan, she is a nature-lover at heart but has the mind of a city girl and moved to Chicago nearly three years ago because she wasn’t smart enough to go somewhere warmer. She takes full advantage of what the city has to offer by training at legendary places like The Second City and eating lots and lots of ethnic food (will travel all the way across the city to Pilsen for the best tacos!). Her love of reading was the catalyst for her adventurous spirit and the reason why she is always stoked to tell stories in their many different forms.

You can visit her at www.emilystrong.net

Bio:
Erin has narrated over 500 audio books including “The Hunger Games” trilogy for The National Library Services/Library Of Congress, “A State Of Wonder,” The Garden Of The Beasts,” “Anna Karenina,” “Ferdinand The Bull, and “Madeline.”

Sonja has two loves: acting and reading. Narrating audiobooks is her absolute passion. She has logged over 600 hours recording textbooks with an organization called Recording for the Blind & Dyslexic, and is currently in the process of recording a kids’ action-fantasy-adventure novel, a steamy and mysterious paranormal romance, and a non-fiction about writing. She loves nothing more than bringing vivid worlds and unique characters to life. When she’s not recording, Sonja can be found onstage, traipsing around Brooklyn, or entertaining children with a variety of dubious accents.

Erica Newhouse is a film, televesion and theater actor living in New York City. She is a graduate of The Juilliard School.

One person will win Signed copies of all 5 books

Four other winners will win paperback copies of UNLEASHED

Anyone who votes +  signs up for Emily’s email list + likes Emily’s FaceBook page gets a copy of the audio book when it’s completed!
a Rafflecopter giveaway

One thought on “Review: Unleashed by Emily Kimelman + Giveaway”