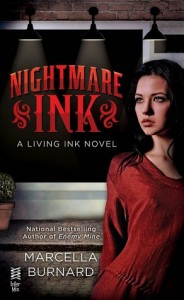 My special guest today is Marcella Burnard, the author of Nightmare Ink. I participated in a massive group review of Nightmare Ink over at The Book Pushers a couple of weeks ago. I loved the animal heroes in Nightmare Ink, especially the warrior-princess Ikylla, so I’m very glad to find out that she’s modeled after a real queen among cats!

Meet the Critters
by Marcella Burnard

Have you ever heard the advice to writers to never put anyone they know into a book? At least, not so they could be recognized? The point is to not get sued. I broke the rule. But at least if I’m sued, I’ll be able to pay my punishment out in kibble. 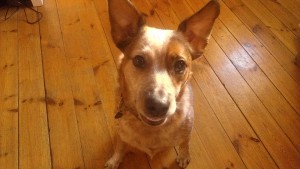 In NIGHTMARE INK, the heroine, Isa, has a dog and a cat. The dog, Augustus is a forty pound red heeler. He’s unique in that he’s a tripod – he’s lost one of his back legs. You never find out in the book that Gus was a rescue dog who’d had his leg badly broken and then amputated while he was still a puppy. But that is what happened. In real life. Gus exists. Except his name is Riley. He belongs to Emily Olesin and Alden Denny. Isn’t that a handsome smile? Never fear. Being a tripod hasn’t slowed Riley down much. He lived across the dock from me until he and his family moved to Norway. (Sniffle) You’ll find Riley, Emily, and Alden mentioned in the acknowledgements at the front of NIGHTMARE INK because I asked for permission to put Riley in the book before I actually did.

I tried to keep Gus’s personality a reasonably close match to Riley’s. They’re both super friendly, loving goof-balls with a willful streak. Gus is probably too sedate in the book. Red heelers want jobs. They’re too smart for anyone’s good and don’t take being left alone for long periods at all well. Enter Isa’s friend Nathalie who pet sits like I’d occasionally get to pet sit for Riley. Fortunately, I didn’t have to pet sit Riley for the same reasons Nathalie ends up having to pet sit Gus. 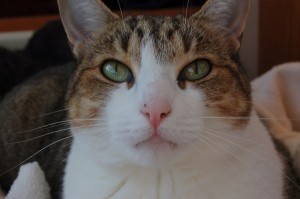 Isa’s feline companion has a real life analog, too. Her name is Hatshepsut. She owns me. She’s very clear which way that possession thing goes, rather like Isa’s cat, Ikylla. Granted, in the book Ikylla is a long haired rather than a short haired cat. But the attitude is 100% the same. One must greet the feline upon coming home. One must request permission before touching said feline. When protocol is followed, the reward is a purr bigger than the cat herself. Ignore the niceties and you end up with a cat wrinkling her nose in disgust, turning and stalking away, her tail twitching in irritation.

If you’ve read NIGHTMARE INK, or if you’re about to, there is a scene I can’t spoil – but Ikylla goes hunting. In case you’re wondering, yes, Hatshepsut is a fearsome hunter. In her own mind. Spiders are her preferred prey. When we lived in a house, she’d go to the garage to hunt and bring back HUGE European Brown House Spiders. Harmless. But did I mention BIG? These things are large enough that when my dear, sweet feline brought one inside and dropped it on my sleeping bag for me to play with, I woke up because I could hear it crawling up the nylon. Never got out of bed so fast in all my life.

Which critters of your acquaintance deserve to be immortalized in a story? 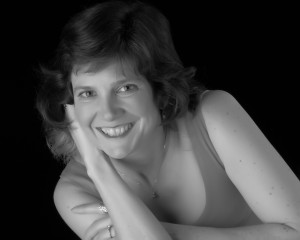 About the Author:
Marcella Burnard graduated from Cornish College of the Arts with a degree in acting. She writes science fiction romance for Berkley Sensation.

Her first book, Enemy Within won the Romantic Times Reviewer’s Choice award for Best Futuristic of 2010. The second book in the series, Enemy Games, released on May 3, 2011.

An erotica novella, Enemy Mine, set in the same world as the novels was released as an e-special edition by Berkley was released in April 2012. Emissary, a sword and sorcery short story released in the two volume Thunder on the Battlefield Anthology in the second half of 2013. 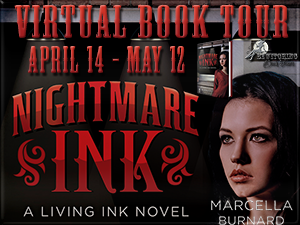 Marcella is giving away 5 ecopies of Nightmare Ink to lucky commenters on her tour!