Today I would like to welcome my fellow Seattle-ite, Sharon Lynn Fisher, who recently published the Ophelia Prophecy (reviewed here). It’s an absolute terrific science fiction romance, sort of Frankenstein meets Romeo and Juliet. Only an SF writer could make that combination work, and it so does!

Marlene: Welcome Sharon! Can you please tell us a bit about yourself? 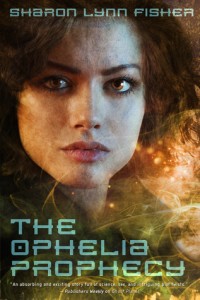 Sharon: Thank you for having me!

Okay, you left that one wide open, so let me see …

Besides being an author, I’m senior editor for SilkWords, a “pick your own path” romance short story site. I’m also mom to a sassy seven-year-old. I live in Seattle. Like any good Seattleite I enjoy doing outside things (hiking, rock climbing, biking). But it rains for nine months of the year so also I love to read and watch movies and good TV. I’m an INFJ, and an Aries. I like cupcakes and shoes. I have a freaky orange cat.

Sharon: Being a half-time single mom and also having another job, there’s really no such thing as a typical day in my life. When I’m writing something new, even less so. Some days I may not write more than a few paragraphs, and others I may write 10 or 15 pages. But I do find I need some dedicated headspace for writing. I need to say to myself, “I’m writing,” and cut off from social media and other unrelated tasks.

I’m a reformed pantser. After having to completely rewrite my first novel from page 1, I realized that fully pantsing things is a form of self torture (at least for me). It leads to writer’s block and panic attacks. I still completely pants my first chapter, but after that I write a one- or two-page synopsis and work from that. Nothing too detailed or it takes all the fun out of the writing.

Marlene: What can we expect of The Ophelia Prophecy?

Sharon: It’s a post-apocalyptic Romeo and Juliet story with exotic locations and lots of action. The romance between the hero and heroine — a human woman who’s lost her memory and a member of a human/insect transgenic race — is a slow burn that boils over suddenly once the substantial obstacles are overcome. I know what you’re thinking: “Insects, ew.” It’s not like that. Trust me.

Marlene: If The Ophelia Prophecy was turned into a movie who would you want to direct it?

Sharon: Hmm, I’ve never thought about that one! Christopher Nolan seems to be the go-to guy for sci-fi these days. Actually, who directed Orphan Black? I LOVE that show. I want that guy. I want that actress, too. 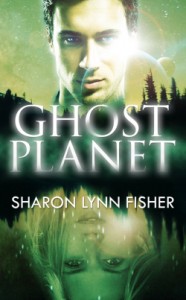 Sharon: I always answer this question with “it chose me.” And it’s true. I had mainly written fantasy romance up to the point I wrote my debut novel, Ghost Planet. While I did make a conscious decision to try my hand at sci-fi, I did not know it would mark a long-term shift in my writing. I enjoy the research so much, and it really opened up a whole new world for me. I’d been struggling to come up with what I felt like were original ideas for fantasy.

As for blending sci-fi with romance, I don’t think I’ve ever written a story without romance. It may be that I never will!

Marlene: What do you hope to say to people with your writing?

Sharon: Considering some of the social issues I raise in my stories, oddly, nothing. I want my readers to escape to another world. I want them to keep turning pages because they can’t stop. I love this quote from a recent review: “Her books, so far, are the exact kind of high-quality popcorn that I’m looking for when I need a mental vacation.” My work is done here.

Marlene: What projects do you have planned for the future?

Sharon: I have a third Tor book coming out early next year, Echo 8. On my blog I describe it (unofficially) like this: Parallel-universe romantic suspense that explores possible connections between quantum physics and psi (also a Bermuda Love Triangle between a parapsychologist, an FBI agent, and an energy vampire).

I plan to write a sequel to Ophelia based on the other couple, Iris and Carrick, who are set up in this first book. I also have another stand-alone in the works. I don’t want to say too much about that one, but it’ll be my trademark blend of sci-fi, fantasy, and romance, set in modern-day Portland.

Marlene: Because I’m a librarian, I love to ask this question: Who first introduced you to the love of reading?

Sharon: Because I’m an author, I’m embarrassed to say: I don’t know! Ack. Maybe my father? My mother says I learned to read by pointing at words in the newspaper and asking him what they were. I’ve had a passion for reading for as long as I can remember. It could very well be that I introduced myself to the love of reading.

Marlene: What’s the book that you most want to read again for the first time?

Sharon: I think I’d have to say the Lord of the Rings trilogy.

Marlene: Tell me something about yourself that I wouldn’t know to ask!

Sharon: I sometimes have dreams about things that actually happen. Kinda stupid things. Nothing like winning lottery numbers. One time I dreamed I was walking down the street with a friend and glanced over and saw an alligator walking next to us. The next day I went to a restaurant I’d never been to before — a little bistro that had opened in an old house. I went to use the restroom, and when I flipped on the light, I saw they’d put a large plastic alligator on a pile of rocks in the bathtub. I wrote this rather useless talent into one of the characters in Echo 8.

Sharon: I have an appreciation for mornings. They feel fresh and creative. But they are easily wrecked by other people speaking to me or expecting me to do things. I think I’d better go with night owl. (Especially considering my clock says it’s 10:01 PM as I finish this.) 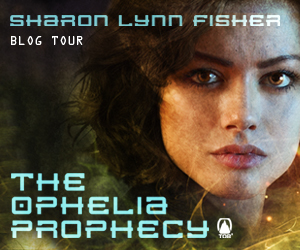 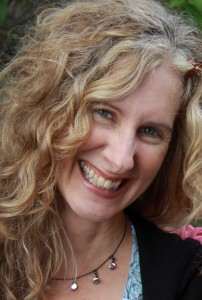 A Romance Writers of America RITA Award finalist and a three-time RWA Golden Heart Award finalist, Sharon Lynn Fisher lives in the Pacific Northwest. She writes books for the geeky at heart—sci-fi flavored stories full of adventure and romance—and battles writerly angst with baked goods, Irish tea, and champagne. Her works include Ghost Planet (2012), The Ophelia Prophecy (2014), and Echo 8 (2014).To learn more about Sharon, visit her website or follow her on Twitter.

Sharon is kindly giving away three copies of The Ophelia Prophecy, one each to three lucky winners! For a chance to win, use the Rafflecopter below: