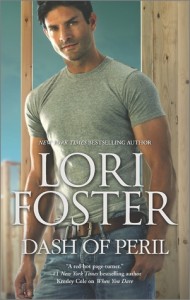 To bring down a sleazy abduction ring, Lieutenant Margaret “Margo” Peterson has set herself up as bait. But recruiting Dashiel Riske as her unofficial partner is a whole other kind of danger. Dash is 6’4″ of laid-back masculine charm, a man who loves life—and women—to the limit. Until Margo is threatened, and he reveals a dark side that may just match her own.

Beneath Margo’s tough facade is a slow-burning sexiness that drives Dash crazy. The only way to finish this case is to work together side by side…skin to skin. And as their mission takes a lethal turn, he’ll have to prove he’s all the man she needs—in all the ways that matter.

Lori Foster’s Love Undercover series comes to a smoking hot conclusion in Dash of Peril. If you enjoy your romantic suspense long on the romance and short on the suspense, this story is a winner.

And while it’s absolutely not necessary to have read the whole series to get totally into Dash of Peril, there is lots of input from characters previously introduced in the series that are much sweeter if you know all the players.

Although the romance starts almost as soon as the book does, this is not an insta-love story. Margo and Dash have been dancing around their attraction for each other since the second book in the series, Getting Rowdy (reviewed here). It’s just taken several months (and one more book) for things to reach a point where Margo is pretty much forced to acknowledge that whether or not she’s ever been taught that it is okay to need someone, she definitely needs Dash Riske, and for more than just his body in her bed.

This is where the suspense takes a second place to the romance. One of the parts of the overall story is that there used to be a LOT of corruption within the police department, a department where Margo Peterson is a detective and a lieutenant. Dash’ brother Logan is one of her trusted officers (his story was told in the excellent series starter, Run the Risk). Her other trusted officer, and Logan’s detective partner, is Reese Bareden, the human hero of Bare it All. (The canine hero is pretty awesome too!) 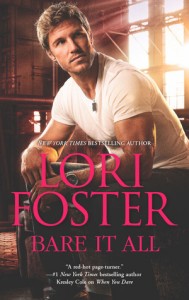 But Margo’s father is the retired chief of police, and we discover that there is a cloud around his retirement. (Also that Margo’s family redefines dysfunctional).

Suddenly they are hunting her. There’s a contract on her life, and the way she discovers that there is a price on her head is when someone t-bones her car, on purpose in a smash and run. Only Dash’ presence on the scene saves her from being finished off right then.

Now that Margo is wounded (a concussion, her elbow is dislocated, and seriously ouch!) she needs help. And she needs an able-bodied person to stick around until she’s healed enough to get back to work and use her gun hand.

Dash has been trying to find a way into Margo’s life since she first let him be her unofficial partner in an undercover sting on this same set of villains.

Dash takes the opportunity to help Margo figure out that she can still be the alpha cop at work while letting herself be something else on her off-duty time. And that it’s important to have some off-duty time!

But while they are redefining their surprisingly hot and inventive relationship, someone much closer to home is bringing the bad guys to Margo’s door.

Escape Rating A-: I enjoyed Dash of Peril the most of the entire series, and I liked all of them! But this one I just couldn’t put down at all. As absolutely hot and sexy as Dash seemed to be, what really made the story for me was Margo. I could identify with the woman who had to be in such control at work, and with good reason, that she had a hard time letting go in any way when she wasn’t on the job. So she let her work consume her life and her identity.

Once she lets herself admit that she has feelings for Dash, he is able to get into her life, and help her to achieve, let’s call it a better work/life balance, where before she didn’t have any balance at all. 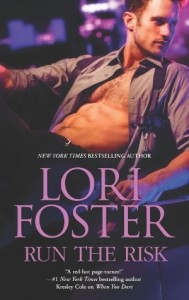 The way in which her family dynamics are totally screwed up gave me even more sympathy for her. Lots of people wouldn’t have done half as well. But those same family dynamics help obscure the identity of one of the villains, and in a way that keeps the readers guessing until the very end.

Dash of Peril also wraps up the long-simmering tension in the police department, and in a way that provides resolution for the characters and the reader.

As an added bonus, a couple of the great guys from Foster’s SBC series make a cameo appearance, as a way of kicking off (or punching out) the beginning of her next series, starting with Cannon, Rowdy’s friend and a very appealing side-character in this series. I can hardly wait!

Lori is giving away a print copy of Dash of Peril to one lucky commenter below (US/CAN only).
a Rafflecopter giveaway

22 thoughts on “Review: Dash of Peril by Lori Foster + Giveaway”