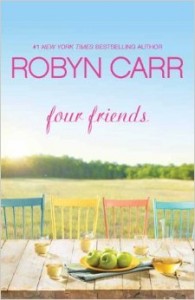 Gerri can’t decide what’s more devastating: learning her rock-solid marriage has big cracks, or the anger she feels as she tries to repair the damage. Always the anchor for friends and her three angst-ridden teenagers, it’s time to look carefully at herself. The journey for Gerri and her family is more than revealing—it’s transforming.

Andy doesn’t have a great track record with men, and she’s come to believe that for her a lasting love is out of reach. When she finds herself attracted to her down-to-earth, ordinary contractor—a man without any of the qualities that usually appeal to her—she questions everything she thought she wanted in life.

Sonja’s lifelong pursuit of balance is shattered when her husband declares he’s through with her New Age nonsense and walks out. There’s no herbal tonic or cleansing ritual that can restore her serenity—or her sanity.

Miraculously, it’s BJ, the reserved newcomer to Mill Valley, who steps into their circle and changes everything. The woman with dark secrets opens up to her neighbors, and together they get each other back on track, stronger as individuals and unfaltering as friends.

I really enjoyed Four Friends, I think because I identified with aspects of all of the characters. And I envied the strength of their friendship. But each of their stories had resonance for me. This is not a story where you get swept away on the tides of romance, Four Friends is a quiet story about women you would like to go out with for one of their early morning power walks.

This is a story about, obviously, four friends. But it’s also the story of four marriages, and the way that some of them bend, some of them break, and the women who are stronger for surviving the things that life has thrown at them.

At the beginning of the story, one woman seems to have it all, one woman is a new age flake, one is throwing out her latest boy toy husband, and one is a widow of mystery. Suddenly, as if Andy’s melodramatic breakup with her second husband the manchild is a catalyst, every woman’s relationship falls apart.

Gerri, who seems to have everything together and a perfect partner in her Phil, discovers that there must be something missing in her marriage that she never saw, because Phil had an affair five years ago, and she totally missed it. Now she feels betrayed and she is furious.

Sonja the new age practitioner, finds herself all alone, when her husband gets totally fed up with years of waterfalls and chakra balancing and totally bland meals and leaves. She never saw it coming, because she was so busy trying to do good for him that she never listened to him. Sonja has a psychotic break and descends in extreme clinical depression.

BJ, the widow of mystery, is the one who discovers that Sonja needs medical attention. After a year of keeping herself completely to herself, when she’s needed, she gets involved. From that involvement springs a friendship that uncovers the secret she’s been hiding.

And Andy gets involved with the man remodeling her kitchen, a sweet, gentle soul who is nothing like the hardbodied boy-men she has been attracted to all her life.

Every one of the women is in a different place, but the circumstances that they are in reflect versions of the reality of women’s lives in their 30’s and 40’s. Gerri misses the partnership she had with her husband, but doesn’t know how to move past, not merely the betrayal, but the fact that she didn’t know. It strikes both at her self-confidence and her trust. She can’t help blame herself that she didn’t listen, didn’t see that what was perfect for her was less than perfect for her husband. And he blames himself both for the affair and for not speaking up about what was missing. Meanwhile, their kids act out in their own less than successful attempts to cope.

As we see the world through Gerri’s eyes, we feel the depth of her friendships, and the confusion she’s experiencing as the construct of her world falls apart. Then we empathize as she begins tentative steps to rebuild amidst the chaos.

In each of the women’s stories, we see them reaching for a happy that will be right for them, even if in the cases of Sonja and BJ, that happiness is about learning to be strong in the broken places.

Escape Rating A: Four Friends is a character study of women and their relationships, particularly their relationships with each other. So the story passes the Bechdel Test with flying colors but doesn’t qualify as a romance. And that’s completely okay with me.

One woman finds love in an unexpected direction. Another discovers that she has a lot to learn if she wants to keep the love she has come to rely on. A third has to figure out how to stand on her own, and the fourth still has difficulty trusting even in friendship. But it’s the way they hold each other up, or pick each other up, that makes the story worth following.

True love is not the goal, but sometimes its the reward. True friendship sees them through. And you’ll cheer for each of them as they find their own paths.

We’re giving away a paperback copy of Four Friends by Robyn Carr to one lucky (U.S.) winner.