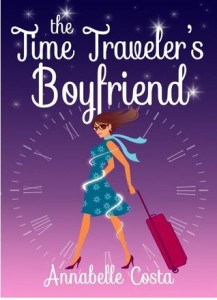 No, really—he has. She doesn’t believe it either until Adam provides her with definitive proof that he does, in fact, have a functioning time travel device sitting in the living room of his Manhattan brownstone.

But instead of getting ready to accept the Nobel Prize, Adam has very different plans for his groundbreaking invention. He wants Claudia to use the machine to travel back in time and stop the accident that landed him in a wheelchair over a decade ago, and prevent the trajectory of events that he believes ruined his life.

When Claudia reluctantly agrees to become the first human time traveler, she knows she’s making a big gamble. If she succeeds, she could have the happy ending with commitment-phobic Adam that she’s always dreamed of. But if she fails, it could mean the end of the universe as she knows it.

The Time Traveler’s Boyfriend is a sweet and utterly charming tale about the lengths that people will go to in order to help the ones they love. Or to keep the ones that they love.

Claudia wants to fix the past for Adam, the man that she loves. But what he wants her to fix, and what she wants to fix, are not exactly the same.

Adam wants Claudia to go back to the day of his accident, and prevent the events that put him in a wheelchair for the last 14 years. Claudia wants to go back to the past and keep Adam from becoming commitment-phobic by preventing his relationship with the woman only known as “The Bitch”. Said “Bitch” was Adam’s first relationship after his accident, and when she left him abruptly, he lost his willingness to try again.

But he says that he loves Claudia, he’s just “not ready”. (Manspeak never changes). After a year together, Claudia is more than ready, and at 36 she’s starting to think that she’d like to have children with the man she loves. Adam.

Then there’s that time machine. Adam is an inventor, and he’s created a device that will let someone go back and fix everything that went wrong in his life. But, as has been proven so often in time-travel stories, you can’t actually change what has already happened.

All you can do is make sure that it happens again.

Escape Rating B+: The thing that sticks with you after the end of the story is how much Adam and Claudia love each other. They will both do anything to make the other happy, in a case where “anything” is pretty extreme.

She can’t fix his accident. When he asks her to try, and she goes back to prevent him from riding his bicycle to work on the fateful morning, he ends up being hit by a taxi. The time stream really wants to stay in place.

The idea to go back and fix his relationship with “The Bitch” is all her own idea. She sneaks back to the time machine and sets herself for two weeks back in the past. Claudia’s intent is to fix Adam up with her younger self, to save him heartbreak and to save herself from the years in between, which contained too many lessons from the school of hard knocks.

But “the past is foreign country, they do things differently there.” Claudia’s younger self thinks that geeky and wheelchair-bound Adam is a loser–she’s 22 and still chasing hard-bodied bad boys. She’s also nasty, self-serving and a bitch. But then, she’s also not really grown-up yet either.

And Adam, even at 24, knows a good thing when he sees it. He falls for the 36-year old woman who values him as he is, and sees beyond the surface.

Claudia is in over her head, and her heart. She’s afraid that any move she makes might erase her personal past, which is Adam’s future. And as much as she loves the young Adam, she wants the one that he will become.

I really felt for Claudia and her dilemma. She wants Adam to be happy, and selfishly, she does want him to be happy with her. But they are happy in the future, she just wants to make it possible for him to accept that.

And her dealing with her younger self is both funny and touching. We all say that “if we knew then what we know now” we’d do something differently. But when confronted with that possibility, Claudia can’t make it happen, she can only go forward and hope she’s making things better.

The ending still makes me smile.

Annabelle and TLC Book Tours are giving away an ebook copy of The Time Traveler’s Boyfriend to one lucky winner. Since this is an ebook giveaway, the contest is open to everyone!
a Rafflecopter giveaway