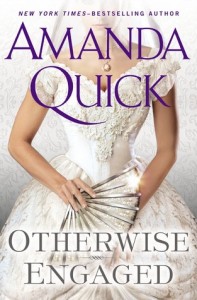 Miss Amity Doncaster, world traveler, is accustomed to adventure and risk. Benedict Stanbridge, a man of science and a spy for the Crown, has faced danger in the darker corners of foreign lands.

One does not expect to be kidnapped on a London street in broad daylight. But Amity Doncaster barely escapes with her life after she is trapped in a carriage with a blade-wielding man in a black silk mask who whispers the most vile taunts and threats into her ear. Her quick thinking, and her secret weapon, save her … for now.

But the monster known in the press as the Bridegroom, who has left a trail of female victims in his wake, has survived the wounds she inflicts and will soon be on his feet again. He is unwholesomely obsessed by her scandalous connection to Benedict Stanbridge—gossip about their hours alone in a ship’s stateroom seems to have crossed the Atlantic faster than any sailing vessel could. Benedict refuses to let this resourceful, daring woman suffer for her romantic link to him—as tenuous as it may be.

For a man and woman so skilled at disappearing, so at home in the exotic reaches of the globe, escape is always an option. But each intends to end the Bridegroom’s reign of terror in London, and will join forces to do so. And as they prepare to confront an unbalanced criminal in the heart of the city they love, they must also face feelings that neither of them can run away from…

I was vaguely disappointed that Otherwise Engaged is not part of The Ladies of Lantern Street series. I kept expecting the Arcane Society to make an appearance, but alas, it was not to be.

The lack of a supernatural element does not mean that Otherwise Engaged is lacking in suspense! We have a serial killer, an extensive cover up, madness the like of Sweeney Todd or Jack the Ripper, and a fake engagement between an intrepid globetrotter and a rookie spy.

What more could a reader ask for?

Amity Doncaster is the woman I think we’d all like to have been in the late 1800s. She is an absolutely fearless world traveler, visiting exotic places all over the globe as a completely independent woman. She supports herself by writing travel articles for the London newspapers, and the public breathlessly awaits her next adventure.

Then she meets Benedict Stanbridge in the Caribbean. She’s taking in the sights of a small island town during a cruise, and he’s bleeding to death in an alley. Not the most salubrious meeting in romantic history.

She rescues him. Not just by helping him get on board ship, but by doctoring his wounds and nursing him back to health. She saves his life. In return, there’s one kiss and his immediate transit to California as soon as they dock in New York.

She never expects to see him again, although she has hopes. Neither of which stand her in good stead when she returns to London and rumors start circulating that all the time she spent in his cabin was more intimate and less innocent than it truly was.

Those rumors make her the quarry of a serial killer who targets women in society circles who have supposedly given up their virtue. He may be mad as a hatter, but it is unfortunately an organized madness. The Bridegroom killer nearly makes Amity his next victim, but she outsmarts him with a concealed blade.

And into the midst of the ensuing drama and scandal, Benedict Stanbridge rushes back into Amity’s life. While his initial desire is to begin where they left off in New York, he believes that he needs to rescue her from the possibility of another attack. She won’t sit idly by while he does all the work; but she will let him assist in her investigation.

To divert the scandal, they agree to a fake engagement, but one that they both secretly hope will become real. It takes Benedict quite a lot of convincing, and several near-death experiences, to convince Amity that it is her that he really wants, for love and not just to protect her.

Escape Rating B+: The fake engagement trope, when it works, is one of my favorites. Two people who are supposed to be in love discover that they actually are. As a concept, the fake engagement works better in historicals than contemporaries, because it feels like there are more logical reasons to fake an engagement. The threat of scandal just isn’t what it used to be.

Amity and Benedict are terrific as the couple who can’t believe that anyone would love them. Amity is practical, sensible and off-the shelf. She’s also been the victim of a scandal, having once had a fiancee who was only interested in using her, then left her at the altar, starting her on her globetrotting adventures. She ran away from the scandal by seeing the world. She also believes herself to be terribly plain, and Benedict much too handsome for her own good.

Benedict is an engineer. He’s sure he’s much too boring for an adventurous woman like Amity. He also suffered from a broken engagement, with a woman who was only interested in him for his money and family connections, but found the man himself terribly boring. (She was a very stupid woman).

Forcing them together for the sake of investigating the Bridegroom Killer makes them get past the superficialities, and also binds them together through the shared experience of danger. Amity finds Benedict anything but boring–he’s a brilliant engineer and an amateur spy!

They need each other for balance, and they fall in love with the real person they are able to trust to guard their back, because they spend their fake engagement under threat from all sides. Falling in love is inevitable, but they are each the last person to see it.

The combination of the hunt for the serial killer with the search for the foreign agent involved in industrial espionage kept the suspense and danger ratcheted up for the entire story. Otherwise Engaged is breathtakingly fun!