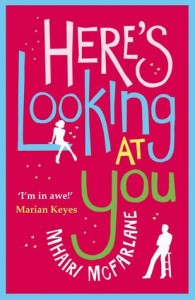 Despite the oddballs that keep turning up on her dates, Anna couldn’t be happier. As a 30-something with a job she loves, life has turned out better than she dared dream. However, things weren’t always this way, and her years spent as the butt of schoolyard jokes are ones she’d rather forget.

So when James Fraser – the architect of Anna’s final humiliation at school – walks back into her life, her world is turned upside down. But James seems a changed man. Polite. Mature. Funny, even. People can change, right? So why does Anna feel like she’s a fool to trust him?

Here’s Looking at You is a combination of ugly duckling story mixed with “handsome is as handsome does”. There’s also a bit of “beauty may be skin deep, but ugly goes clean through to the bone.”

And none of us are who we were in high school, and thank goodness for that.

Anna was the school “fat freak” (I’m quoting the story here, and some of what is said is MUCH worse). The bullying she suffered was beyond awful, to the point where it reminded me of the bullying scenes in Carrie. Anna was tormented by every student who was considered to be above her in the social pecking order, and that meant by every single student. The final humiliation that she suffered was utterly heartbreaking in its cruelty.

Even 16 years later, Anna’s self-esteem is still scarred by her experiences. And so would most of us be. Even though she has lost the weight that set her apart, and is now a beautiful woman, she can’t see it. (I’m also glad that Anna seems to be a normal size, and not a stick-figure 0 or 2.)

She also puts her passion into her work as a curator at the British Museum. She’s intelligent and successful. She also has a slightly obsessive interest in the Empress Theodosia, an interest that is about to become a major exhibit under her direction. (Theodosia and her husband Justinian are definitely fascinating historical characters. There are tons of books about them.)

Anna’s 16th reunion nearly derails her. She doesn’t want to face the people who tormented her. Her best friends think that its time she found some closure for the pain in her past.

The person she’s really afraid to meet is James Fraser, her high school crush and the cause of her bitterest humiliation. But when she finally screws up her courage and attends the reunion, James doesn’t even recognize her–and neither does anybody else.

She thinks its all behind her, when James and his PR firm are assigned to work on her museum exhibit. He doesn’t have a clue who she is and why she gives him so much snarkitude, but she can’t forget the part he played in her life.

There’s just this one problem with continuing her verbal sniping at James; he’s actually pretty sweet, and they are very sympatico. While she’s watching his every gesture to determine whether or not he recognizes her, they are well on their way to becoming friends.

For me that was the story. James and Anna develop a terrific friendship, one that may have some sexual chemistry underneath, but is mostly about how much fun they have together, and how easy they can both be their real selves.

The more time that James spends with the intelligent and witty Anna, the more he realizes that he hasn’t left the shallowness of high school, but that it is high time that he did. He doesn’t need more emptiness in his life; he just needs Anna.

Escape Rating B+: A lot of people are going to describe this story as chick-lit, but Anna, for all of her angst, is much too smart and self-aware for that. There’s an element of Bridget Jones’ Diary all grown up, but maybe only if James is Bridget.

Anna has some terrible anguish in her past that she needs to work through, but James just plain needs to grow up. He’s actually very sweet and thoughtful in a lot of ways, but he’s drifting through his life, and he’s better than that.

Anna is surrounded in the story by a terrific group of friends and family. Her friends and her sister are supportive of her no matter what she does or doesn’t, and she is there for them. The background events of her sister’s bridezilla wedding showcase how much love there is in her family, and the amount of tolerance for each other’s quirks. At the same time, sister Aggy comes through for Anna when it really counts.

James is the one who discovers that he’s making a mess of his life. His oldest friend is a self-serving dickwad, and his soon to be ex-wife is a manipulative user. It takes him most of the book, and a lot of true friendship with Anna, to figure out that he wants real friendship, real love, and less peer pressure and possessions. It’s a hard lesson.

I think my favorite character may be Luther the constipated cat. He provides love, extreme grumpiness and comic relief where needed.

2 thoughts on “Review: Here’s Looking at You by Mhairi McFarlane”