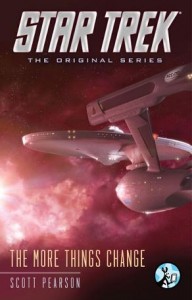 Six months after the events of Star Trek: The Motion Picture, Doctor Christine Chapel and Spock must save the life of an ailing Audrid Dax, her true nature as a Trill having remained a mystery until now. But after an unknown vessel attacks their shuttle, a risky game of cat-and-mouse may be the only way to save all their lives.

This novella has a possible future as a one-set play. All of the action of note takes place inside a shuttle-craft. In fact, it would almost work as a monologue, as the heart of the story takes place inside the head of Christine Chapel.

Chapel, no longer Nurse Chapel but Dr. Chapel, has gained her medical degree and is starting to spread her wings. The events of Star Trek: The Motion Picture, however, have delayed her assuming full confidence by putting Dr. McCoy back as Chief Medical Officer of the Enterprise.

McCoy dispatches her and Spock to take the Trill ambassador Audrid Dax to rendezvous with a Trill vessel to deal with an urgent medical issue of Dax’s.  However, there is more under the surface than meets the eye: with Dax, with the mission, and with Chapel’s relationship with Spock.

Escape Rating B: This is a competently written character piece that is worth reading by any fan of TOS, particularly those who hanker for knowing what comes next.

As near as I can tell, The More Things Change references just about every canonical appearance of Chapel and provides a nice bridge between TOS and her final appearance in The Voyage Home. Some of the references to incidents in the animated series are inspiring me to dust off the DVDs and give TAS a proper watch.

On the other hand, it did feel like the story was a little too careful to name-check every relevant incident in the TV shows; it would have been nice if it had given Chapel a little more roam to wander around in her life, as it were. That said, her voice rang true as that of a person ready to acknowledge the past that shaped her and move on to her future.

The big reveal that Audrid Dax is both Audrid and Dax, host and symbiont,  is of course not a surprise to any fan of Star Trek, though it was to Dr. Chapel. I do have a quibble about how long the Trill could have actually kept their secret in the face of sensor technology (and the impression one gets that just about every space-faring civilization in the universe of Star Trek is effectively a total surveillance state), but well, such quibbles are part of what make fandom fun.  The external conflict (in the form of raiders chasing the shuttle in an attempt to capture Dax) was strictly paint-by-numbers, but didn’t detract from the core story of Chapel resolving her relationship with Spock and preparing to leave her second family.