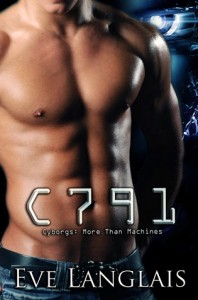 Machines aren’t supposed to feel, but this cyborg can’t help falling in love.

Assigned as a specimen collector for a captured cyborg, Chloe is intrigued by the machine disguised as a man. Kidnapped during his daring escape, he shows her that despite the chip in his brain, his humanity is not completely lost.

Formerly known as unit X109GI, Joe is on a quest to discover his origin. While he doesn’t find the answers he’s looking for, he does discover that affection and lust aren’t just for humans. But when it comes to a battle between logic and love, which side will the cybernetic organism–once a man–choose?

Evaluating his feelings will have to wait though because the military isn’t done with Joe. But their threats against him pale in comparison before the shocking discovery of project C791, the revelation of which stuns the rebel cyborgs–and ignites a fury for vengeance.

It takes the touch of the right woman to remind this cyborg of his humanity.

Two of the things I love about Eve Langlais’ books are her snarkier than snark dialog (which usually makes me laugh) and that her heroines are not cookie-cutter Barbie size 2’s. Even in a science fictional type story like C791, her heroines always feel more real because they aren’t supposedly perfect, just perfect for the hero.

C791 is the first book in her Cyborgs series, so it needs to both introduce the world she has created and fulfill Langlais’ trademark of being one hot love story. It works on both counts.

There have been lots of ways for futuristic stories to develop cyborgs, but it’s usually done by either converting a human with the addition of a few cybernetic parts (think Six Million Dollar Man) or by bringing an injured person back from the brink of death (or after) by taking away their previous identity when they are completely reprogrammed (think Robocop). In the latter situation, the military is almost always involved in some skullduggery.

The cyborgs in this series were created by the military, and they seem to have started with unwilling participants and then reprogrammed and brainwashed them. They know that they were once men, but not who they were.

However, like the Cylons in BSG, the cyborgs rebel. Not for any mysterious motives, but simply because the military decides to exterminate them all. A few of them have broken their programming, and don’t merely refuse to walk out the airlock, but reprogram their brethren to turn on their former “masters”.

I keep using words like “men” and “brethren” not because I’m using “men” as the universal word for “people”, but because as far as anyone knows, there are no female cyborgs. Of course, not everything that “everyone knows” is always the truth. The military has lied about absolutely everything involved with the cyborgs.

The cyborgs are hunting the galaxy for those involved with the program. Not just for revenge, but primarily for information. They don’t know how they were created, and they can’t reproduce biologically. (Like Data, they are fully functional, but they’re all shooting blanks)

Just as the cyborgs are creating their own culture, their leadership is all too aware that they are a dying race. And that’s where Joe’s story begins. He’s on a mission to find some of that information, and has allowed himself to be captured so that he can infiltrate the systems in this one particular lab while the military thinks they are torturing him. (How this works is very cool).

But as part of their testing, the military bring in a lab technician to take “samples”. Chloe is slightly clumsy and not the willowy type that is considered beautiful, but she is one of very few women on the military base. Her compassion for the cyborg as well as her own sweet nature break through the impassive shell that Joe has formed around himself.
So even though his wooing redefines rough (the cyborgs are not all that socially ept) his desire to protect Chloe, and simply his unrelenting desire for him, wins Chloe’s heart. Chloe lets herself be swept along, even though she doesn’t believe that Joe can return all of her feelings.

Then her secret is revealed, and she’s not sure she can survive all the negative feelings that she has engendered among the entire cyborg colony. Or if she is worth loving at all.

Escape Rating B+: If you are looking for a short and very sexy sci-fi romance to sweep you away, then C791 just might fill the bill. Or any other craving that happens to be in need of filling.

Just like all of Eve Langlais’ books, this one is absolutely fry your circuits hot. But there is also a very cool sci-fi story mingled with the sex.

The story of the cyborg rebellion, how it started and where they are in the development of their own society, would make for good SF with or without the romance. There have been other series where the military has been overcome or outwitted by people they have made other than human and enslaved (Lora Leigh’s Breeds series comes to mind), but the worldbuilding that creates these more than humans is off to a great start.

Chloe, the heroine, often seems like a bit too much of a victim, but when all is revealed, her reasoning, and her courage in the face of overwhelming circumstances, shines through. Joe, as the leader of the cyborgs, makes a terrific hero. He’s not just brave and self-sacrificing, but he’s also endearingly awkward as he falls in love. He’s the ultimate geek hero.

So far, there are four more books in this series, and I can’t wait to scoop up each and every yummy bite.