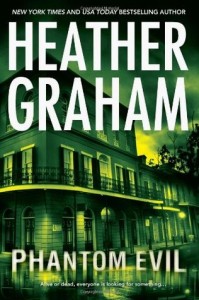 A secret government unit, a group of renegade paranormal investigators…and a murder no one else can crack

Though haunted by the recent deaths of two teammates, Jackson Crow knows that the living commit the most heinous crimes.

A police officer utilizing her paranormal intuition, Angela Hawkins already has her hands full of mystery and bloodshed.

But one assignment calls to them too strongly to resist. In a historic mansion in New Orleans’s French Quarter, a senator’s wife falls to her death. Most think she jumped; some say she was pushed. And yet others believe she was beckoned by the ghostly spirits inhabiting the house—once the site of a serial killer’s grisly work.

In this seemingly unsolvable case, only one thing is certain: whether supernatural or all too human, crimes of passion will cast Jackson and Angela into danger of losing their lives…and their immortal souls. 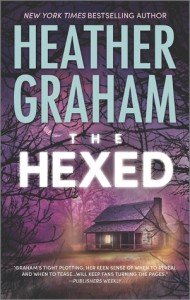 After reading The Hexed last week, and loving it, I couldn’t resist going back to the beginning of this series and trying to figure out how the author got here from there.

Besides, I’m a terrible completist and it was driving me a bit nuts that I had so much fun with book 13 in a series and hadn’t gotten around to books 1-12. Now that I’ve read book 1, I can see that this series is going to be my “treat” reading for a while.

Phantom Evil is the first book in Heather Graham’s Krewe of Hunters series, and it establishes both the series and the group in a way that set the bar high for the rest. (The Hexed lived up to that bar!)

There are so many marvelous paranormal series set in New Orleans. There is obviously something about the long and storied history of that melange that inspires writers to do their spine-chillingest. (If you like New Orleans’ set paranormals, try Suzanne Johnson’s River Road.

Although there is a definite ghostly vibe to Phantom Evil, the story also establishes that evil is an act of the living. The ghosts are either icing on the cake, a distraction or possibly an influence, but it is living humans who choose the path that leads to the dark.

The mysterious Adam Harrison puts together a team of elite investigators under the leadership of Jackson Crow. Every member of the team has solid credentials, and experience in dealing with things that go bump in the night.

Not that there isn’t some bumping in the night together, but that’s not the main thrust of the story.

Harrison sends his team on their first mission; to investigate the death of a prominent State Senator’s wife–in a house that’s just chock-full of evil ghost stories.

The death has been ruled a suicide, but the Senator doesn’t believe it. He’s sure that the ghosts killed her.

Crow and his team go in with an open mind. Yes, one of New Orleans most notorious serial killers committed his crimes in the house, but State Senators have plenty of modern day skeletons in their closets.

And the victim didn’t fall from the balcony, she was thrown.

On the very first day, investigator Angela Hawkins finds a century old corpse in the basement. She’s led to the bones by a ghost. More and more evidence piles up that the house really is haunted.

The task before Crow’s task force is to determine who had the best motive (and opportunity) to want to relieve the Senator of his marital burden, while putting all of the 19th century ghosts to rest.

It’s especially difficult when there are murderers in both eras who equally want the investigation stopped–dead.

Escape Rating A-: This series seems to be paranormal romantic suspense, with the emphasis on the paranormal and the suspense. The story is chilling because there is both 21st century evil and 19th century evil, and both mysteries have to be solved to get a complete resolution.

That the ghosts don’t commit murder does not make the story any less chilling. Angela Hawkins is particularly sensitive to the ghostly hauntings, a sensitivity that both puts her in danger and saves her.

It’s also a sensitivity that brings out the protective instincts in Jackson Crow. Neither of them expected to find a relationship in the middle of the investigation, but it definitely adds to the story without taking anything away from the suspenseful elements.

In addition to the central mysteries, we also see the team develop. The scene where they decide on the name “Krewe of Hunters” made me want to cheer, but we also get to see the group form into an effective team. Every member has their particular strengths, and their growing partnership is fun to watch.

The investigation was absorbing as the team worked both the ghost angle and the political angle until they were able to solve all the puzzles.

Phantom Evil is a terrific start to the series, and I’m definitely looking forward to reading my way through the rest.

One thought on “Review: Phantom Evil by Heather Graham”