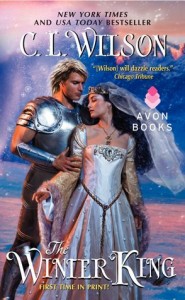 After three long years of war, starkly handsome Wynter Atrialan will have his vengeance on Summerlea’s king by taking one of the man’s beautiful, beloved daughters as his bride. But though peace is finally at hand, Wynter’s battle with the Ice Heart, the dread power he embraced to avenge his brother’s death, rages on.

Khamsin Coruscate, Princess of Summerlea and summoner of Storms, has spent her life exiled to the shadows of her father’s palace. Reviled by her father, marriage to Wintercraig’s icy king was supposed to be a terrible punishment, but instead offers Kham her first taste of freedom—and her first taste of overwhelming passion.

As fierce, indomitable Wynter weathers even Khamsin’s wildest storms, surprising her with a tenderness she never expected, Kham wants more than Wynter’s passion—she yearns for his love. But the power of the Ice Heart is growing, dangerous forces are gathering, and a devastating betrayal puts Khamsin and Wynter to the ultimate test.

My friends Has and Lou over at The Book Pushers called The Winter King an “old skool” fantasy romance. After having devoured The Winter King, all 600 pages of it, in less than two days, I’d pretty much agree.

The Winter King reminds me a lot of the big, meaty fantasy romance sagas like Melanie Rawn’s Dragon Prince series. There’s an epic sweep of magic and hot juicy romance (sometimes a bit literally) set in a world of endlessly warring kingdoms and opposing gods.

It makes for a sprawling story so big you can absolutely wallow in it. In a completely good way. When done well, this kind of storytelling makes for a great big “YUM”, and The Winter King is definitely done well.

We start out with what appears to be one misguided young man’s quest for the legendary sword of his ancestors–up until he makes off with the neighbor king’s fiance and kills the king’s brother as part of his escape plan. Then he disappears from sight for three years, while the aforementioned king sets out to reduce the young man’s rival kingdom to splinters.

And that’s where the real story begins.

Falcon was the Prince of Summerlea, and he stole the King of Winter Craig’s fiancee and a magical artifact that is supposed to point out the location of legendary King Roland’s sword, Blazing.

Wynter, the King of Winter Craig embraces the terrible side of his country’s heritage in order to lay waste to the kingdom that sent Falcon. Three years later he’s conquered the last stronghold, and is prepared to claim his prize.

Wynter intends to injure the King of Summerlea by demanding one of his three beloved daughters as his wife. Instead, Verdan Summerlea gets the upper hand by foisting his definitely unbeloved fourth daughter on the enemy he hates.

He hates his daughter Khamsin enough to beat her very nearly to death in order to get her to participate in this charade. It’s not until half-way through the beating that Kham figures out that the enemy king will give her a better chance of survival than staying at home.

None of the Summerlanders have any clue that giving Kham to Wynter is also his best chance at survival. But there is so much distrust between the two countries, and so much deception involved in all of Kham and Wynter’s initial encounters, that it takes a lot of time, and quite a bit of other people’s blood, before they manage half a rapprochement.

There are too many people invested in keeping them apart. Some with honest mistrust, and many full of deliberate treachery.

Even though they each have nowhere else to turn, it takes despicable betrayal from both sides of their conflict to finally push them toward each other. And it might be too late, not just for Kham and Wynter, but for the entire world.

Escape Rating A-: I have some quibbles, but after absolutely gobbling the story up in a relatively short time, I have to say I had a ball reading it.

Which doesn’t mean that I didn’t want to shake some sense into both the hero and heroine. Frequently.

The tension in the romance was based on several huge misunderstandammits, a trope I generally hate. However, Kham and Wynter were not stuck in a fake conflict that could have been resolved with a simple conversation. They frequently misunderstood each other because their relationship begins as a forced marriage of enemies. Their countries have been at war for three years. Their people don’t trust each other for very good reasons. It’s difficult to clear the air when you aren’t ready to trust the other person.

That being said, Kham is very young and has lived a life of complete isolation. She’s never had to behave in the court setting she should have, and she hasn’t learned the lessons one usually does about guarding your presentation and the way that people behave when they are being spiteful or simply getting along. She’s observed her father’s court in secret, but was never allowed to participate, and for reasons that weren’t her fault. Figuring out how to behave in the real world, and becoming Queen of people who hate and distrust her, was being thrown into the deep end of the pool. She learns, but she flails about a lot and suffers from some self-indulgent self-pity at points early on. She gets better.

Wynter has more life experience, and more real-life experience than Kham does. Admittedly, a lot of it has been horrible, and he’s been forced to take on responsibility early and fast. His life has not been easy. His last fiance betrayed him, so trusting the daughter of his enemy is beyond difficult. At the same time, he seems to not understand that his treatment of Kham will be mirrored by his entire court. Even though he doesn’t trust her, he seems to have totally missed the point that his court needs to respect her as Queen and the potential mother of the next ruler.

One side note, I wish the King of Winter Craig had not been named “Wynter”. It felt just a shade over the top. Totally my 2 cents and YMMV.

The romance between Kham and Wynter is almost too hot to read on a summer night, but in a way that makes sense in their relationship. This is a dynastic marriage, there has to be a child. So the romance is a terrific sex-into-love story. The sparks they strike off of each other in their clash of wills translates directly into steam.

Without going into spoiler territory, I will say that the ending throws a lot of tropes onto their heads. And it’s marvelous.

One thought on “Review: The Winter King by C.L. Wilson”