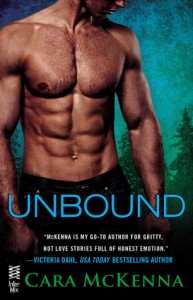 She set out to find herself, and discovered the darker side of desire.

Merry’s lost a lot recently—first her mother, then close to a hundred pounds. Feeling adrift, she strikes out in search of perspective. A three-week hike through the Scottish Highlands was supposed to challenge her new body and refocus her priorities, but when disaster strikes, she’s forced to seek refuge in the remote home of a brooding, handsome stranger…

Rob exiled himself to the Highlands years ago, desperate to escape his own self-destruction. Haunted by regrets, he avoids human contact at all costs…but when Merry turns up injured, he can’t very well run her off. And as he nurses her back to health, Rob can’t resist his guest’s sweet demeanor—or her flirtatious advances. The igniting passion between them rouses a secret appetite Rob has long struggled to keep hidden. But Merry craves nothing more than to help Rob surrender to his desires, and the journey draws the lovers into an entirely different kind of wilderness.

Last week I read the latest Cara McKenna book, Lay It Down, for a joint review at The Book Pushers. One of the things we did in our review was compare her latest to After Hours, Hard Time and Unbound, because it was a bit different from her other books. The romance was much slower to build, and it took quite a lot of book to get there. There’s also a strong omantic suspense element that isn’t in evidence in some of her earlier work.

I realized that I had read both After Hours and Hard Time (reviews here and here) but had missed Unbound. I wanted to see where it “fit” with the rest. And I had a very long airplane trip in front of me. I knew I’d be in for a good read, so I let my fingers do the walking to Amazon.

It turns out that Unbound is kind of in the middle between After Hours and Hard Time on the one side, and Lay It Down on the other. Here’s my take on it:

Unbound is a romance between two people who have gone through way too much to get to the isolated location where they meet. They also each have a metric ton of secrets that make a remote getaway romance seem fascinating, but have devastating consequences in the real world.

Merry takes herself on a three-week hike in the wilds of Scotland. Because she can. Because it’s a trip that her mother always wanted to take (the Scotland part and not the three-week hike part). Those points have relevance because her mother died less than a year ago, and Merry is still having difficulty coping with the loss. And speaking of losses, her mother’s death kicked her into losing almost 100 pounds. Not out of a health scare, but because she needed something to obsess over to deal with her grief. Exercise and healthy nutrition turned out to be an all-consuming quest that kept her going.

Her exercise journey made it possible for her to take that hike alone in the Highlands. It also seems to be straining her relationships with her friends, and certainly caused her ex-boyfriend to break up with her, now that she had enough self-confidence to stop settling for letting him make booty calls whenever he wanted without being willing to introduce her to his friends.

But her recovery is something that she is still working through. Changing her body has resulted in life changes that she wasn’t expecting. Some good, like the strength and stamina to take the trip, and some bad, like changes in all her relationships.

Alone time is great, until she catches a nasty bug from swimming in a few too many unfiltered Highland lochs. And that’s where Rob comes in.

Rob is the hermit who takes her in and helps her get over her illness. He seems to be the perfect mountain man, at one with his surroundings and living off the land in his small, isolated cabin.

But Rob is not at peace with much of anything. He’s running away from all the people and relationships he broke when he was at his depths. And from sexual impulses that his upbringing told him must be wrong.

He’s so shy and withdrawn that Merry, in the midst of her own isolation, can’t help but reach towards. Especially since all that survivalist living has made him way hot. Being on his own has made him way scared.

They start out exploring each other, not just physically but also emotionally. But for as many secrets as Rob reveals, there’s one he can’t bring himself to admit–right up until it bites them both in the ass.

Escape Rating B+: I remember not being interested in this story when it was first released because of the weight loss meme. It seemed like it might fall into the trope of “fat girl gets skinny and guys are suddenly interested” like Big Girl Panties by Stephanie Evanovich. In spite of the blurb, this isn’t that.

Merry is more focused on her strength and stamina, that her exercise program has made her more capable. She doesn’t seem to be a size 2, but healthy and strong. She’s fascinated with the things her body is now able to accomplish. She acknowledges that she will always have a love/hate relationship with food, and that some women are very able to rock their curves, she’s just not one of them. Her journey is about finding her inner strength by developing her physical strength.

There’s also an element of Merry saying “goodbye” to her mother, and to her own past. She’s getting her head together and moving forward. Until she gets sick and drops into Rob’s isolated life.

Rob is out there in the hills because he feels that the only way he can stop damaging himself and others is to be completely removed from all temptation. He starts out thinking that he can’t hurt Merry because she can’t stay. And the short-term nature of their relationship allows him to reveal the sexual kink that shames him; he needs to be tied up.

Merry finds that her inner vixen is more than up to that particular challenge. For someone who has kept her libido under wraps, the games that Rob needs to play turn out to be endlessly hot and incredibly fulfilling.

But the closer they become physically, the closer they get emotionally. And that’s where the trouble comes. Merry doesn’t have a clue why Rob can’t come to town with her, can’t leave his mountain. And he dodges all the possible opportunities for revelation until it seems like it’s too late, not just for their relationship, but also for his survival.

The thud in the story as that shoe drops reverberates for the rest of the book, making the ending just that much more satisfying.