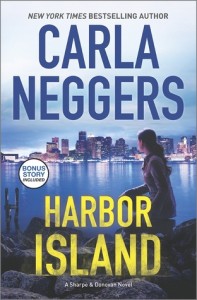 Emma Sharpe, granddaughter of world-renowned art detective Wendell Sharpe, is a handpicked member of a small Boston-based FBI team. For the past decade Emma and her grandfather have been trailing an elusive serial art thief. The first heist was in Ireland, where an ancient Celtic cross was stolen. Now the Sharpes receive a replica of the cross after every new theft—reminding them of their continued failure to capture their prey.

When Emma receives a message that leads her to the body of a woman on a small island in Boston Harbor, she finds the victim holding a small, cross-inscribed stone—one she recognizes all too well. Emma’s fiancé, FBI deep-cover agent Colin Donovan, is troubled that she’s gone off to the island alone, especially given the deadly turn the thief has taken. But as they dig deeper they are certain there is more to this murder than meets the eye.

As the danger escalates, Emma and Colin must also face do-or-die questions about their relationship. While there’s no doubt they are in love, can they give their hearts and souls to their work and have anything left for each other? There’s one thing Emma and Colin definitely agree on: before they can focus on their future, they must outwit one of the smartest, most ruthless killers they’ve ever encountered. 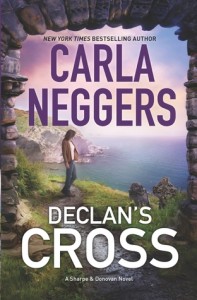 I was introduced to the Sharpe and Donovan series with last year’s Declan’s Cross (reviewed here), the third book in this romantic suspense/mystery series. Being a completist, I went back and read the prequel novella, Rock Point, and the first two books in the series, Saint’s Gate (review) and Heron’s Cove (review), so that I could get up to speed.

All of that catching up certainly came in handy when I got to Harbor Island, because all of the characters who have had important roles in the previous books get major parts (and have major parts of their arcs resolved) in this story. And, the quest that has been driving the entire Sharpe family of art detectives crazy for ten years also acquires some new twists and turns.

That bit is resolved, and it isn’t, both at the same time, which was pretty cool. But I’m not giving it away.

Emma’s family are well-respected and relatively well-to-do art detectives. Colin’s family were fishermen and innkeepers. They came to the FBI from very different roads, and have very different jobs. Emma uses her knowledge of art history to track down art thieves. Colin is an undercover agent.

When one of her art thieves turned out to be his mob boss undercover assignment, they found each other. For the moment, her art thieves have turned up so many murders that Colin has been able to have a relatively regular assignment with the Boston High Impact Team, where Emma is stationed.

Harbor Island is yet another convoluted case where Emma’s art thieves turn to murder and mayhem in both New England and olde Ireland, allowing the chase to involve their friend Sean Murphy, a senior investigator with the Garda.

The Sharpe family of art detectives has been investigating a string of high end art thefts that have been going on for ten years, starting in Sean Murphy’s patch at Declan’s Cross. When a woman starts probing that string of art thefts for a possible movie, someone turns to murder.

But no one who has ever been involved in the case thinks that it’s their thief. So who is targeting Emma, and why?

Escape Rating B+: There has been a large cast of fascinating characters involved in the entire Sharpe and Donovan series, and it seems like every single one of them has a part to play in Harbor Island. As much as I enjoyed Harbor Island, and I did very much, I was extremely glad that I had read the other books first. These people have a lot of intertwined relationships, and the story is better if you know who the players are and what parts they are playing. (Start with Saint’s Gate)

Emma is the primary investigator (and target) in this one. The crime seems to be wrapped up in her family’s long-running search for that mysterious thief. Not only was the first victim following in the Sharpe family footsteps, but she was poking her nose into lots of lives and secrets that no one wanted revealed–even in a fictionalized version.

As the victim’s last movements are traced from Boston to LA to Maine to Ireland and back, it seems as if she stirred up multiple hornet’s nests; accusing relatively innocent parties of being the notorious thief, and alienating her family with her relentless pursuit of her project, intending to use someone else’s money to make it happen.

There’s always a question, did the thief kill her, did she expose something else she shouldn’t have, or did her family finally explode? The answers are a surprise.

And in the background, we have a forbidden love story simmering, and the second chance at a happy ending for an estranged married couple, mixed with a fascinating exploration of art and murder.

We’re giving away a copy of Harbor Island to one lucky (U.S.) commenter! 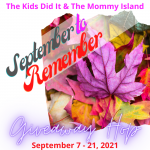 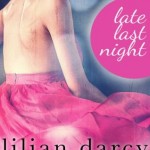