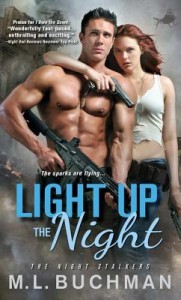 They both have something to hide
When hotshot SOAR helicopter pilot Trisha O’Malley rescues Navy SEAL Bill Bruce from his undercover mission in Somalia, it ignites his fury. Everything about Trisha triggers his mistrust: her elusive past, her wild energy, and her proclivity for flying past safety’s edge. Even as the heat between them turns into passion’s fire, Bill and Trisha must team up to confront their pasts and survive Somalia’s pirate lords.

Trisha O’Malley may fly a different type of helicopter from the rest of the crew that we’ve met in The Night Stalkers series, but she brings the same kind of dedication, drive and skill to her “Little Bird” that previous team members have carried to their positions on the big DAP Black Hawk helicopters that are the SOAR trademark.

Trisha’s “Little Bird” helicopter may be tiny, but its sole purpose on the mission is to rain death and destruction on its enemies. The weaponized version barely has enough space for a pilot and co-pilot, and the space is only spacious enough when they fly with the doors off.

Trisha herself is a smaller package than the previous women of SOAR, but that package is an ace helicopter pilot and a martial arts expert. She’s small and mighty. Mighty enough to hold her own in a fight with the 6’2” Navy SEAL she rescues in Somalia.

Billy Bruce starts out just plain mad that she pulled him out of his embedded operation among the Somali pirates. She saw that his cover was totally blown, and dragged him out semi-attached to the outside of her bird. It wasn’t until the middle of his rant aboard ship that he realized that the pilot he was yelling at was female. The first smart thing he did was to keep yelling, and not treat her any different because she looked like a pixie.

Neither of them wants a relationship, which doesn’t stop them from exploring the crazy chemistry between them. It starts out being easier that they are both Lieutenants but from different services; he’s Navy and she’s Army. It adds a friendly rivalry to the beginning of their story, and keeps them from violating the anti-frat regs.

But when Billy has to rush home for his mother’s funeral, and Trisha faces her own crisis of faith, they support each other in choppy emotional waters that bind them together. Even as the fear of how much it will hurt when the military inevitably sends them in different directions threatens to tear them apart before they can truly explore what they have.

In the midst of a dangerous hostage rescue, in the middle of the Somali desert, they discover that what they have is just one more reason for them to fight. Not with each other, but together against the odds.

Escape Rating B+: The entire Night Stalkers series (start with The Night is Mine, reviewed here) is terrifically fun adrenaline-packed romance. If you want military romance packed with excitement both between the sheets and on the field of battle, this series is a winner.

Trisha has some elements of the character of Emily Beale, who was the heroine of The Night is Mine and was the first woman in SOAR. She is also Trisha’s role model. But they share something else in that both Trisha and Emily are children of privileged backgrounds, and both of them had mothers who desperately tried to mold them into more traditional female roles, and failed.

The difference is that Trisha spent her teenage years running with a gang in South Boston, and then coming home to her cushy but stifling upper-crust home. The gang taught her survival skills, got her started in martial arts, and helped her become a strong survivor.

Billy is from an even more streetwise background. The death of his father in the disastrous military operation at Mogadishu pushed his mother and 8-year-old self into poverty. Billy ran with some dangerous gangs until he got his revenge on the man who shot his best friend, and nearly killed Billy too.

Both these people have terrible scars, and dark secrets in their past. They’ve both learned to rely on no one but themselves, and one of the things they have to overcome is their tendency to keep secrets from each other.

On the lighter side, the humor and camaraderie of the mixed SOAR, Delta Squad and Navy crew aboard the old helicarrier create laughter and chuckles with the way that they tease and dig at each other. It was fun to see the Night Stalkers actually mingle with a bigger group, and not just hover on the fringes. 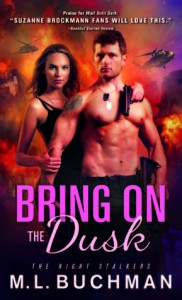 And it was an absolute pleasure to see Lola Maloney, the heroine of Take Over at Midnight (reviewed here), come into her own as an officer and as a mission commander. She does a fantastic job filling Emily Beale’s very impressive shoes.

Even though all the positions on the first Black Hawk have been both filled and partnered, I’m very happy that the author has found a way to continue the series with liaisons to the team. Which means I’m also looking forward to Bring on the Dusk, coming aboard next March.

M.L. Buchman and Sourcebooks Casablanca are generously giving away copies of The Night Stalkers backlist titles. (The series is awesome!) Grab an entry while you can!
a Rafflecopter giveaway 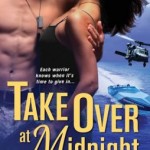 Review: Take Over at Midnight by M.L. Buchman

7 thoughts on “Review: Light Up the Night by M.L. Buchman + Giveaway”