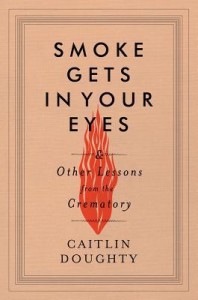 A young mortician goes behind the scenes, unafraid of the gruesome (and fascinating) details of her curious profession.

Most people want to avoid thinking about death, but Caitlin Doughty—a twenty-something with a degree in medieval history and a flair for the macabre—took a job at a crematory, turning morbid curiosity into her life’s work. Thrown into a profession of gallows humor and vivid characters (both living and very dead), Caitlin learned to navigate the secretive culture of those who care for the deceased.

Smoke Gets in Your Eyes tells an unusual coming-of-age story full of bizarre encounters and unforgettable scenes. Caring for dead bodies of every color, shape, and affliction, Caitlin soon becomes an intrepid explorer in the world of the dead. She describes how she swept ashes from the machines (and sometimes onto her clothes) and reveals the strange history of cremation and undertaking, marveling at bizarre and wonderful funeral practices from different cultures.

Her eye-opening, candid, and often hilarious story is like going on a journey with your bravest friend to the cemetery at midnight. She demystifies death, leading us behind the black curtain of her unique profession. And she answers questions you didn’t know you had: Can you catch a disease from a corpse? How many dead bodies can you fit in a Dodge van? What exactly does a flaming skull look like?

Honest and heartfelt, self-deprecating and ironic, Caitlin’s engaging style makes this otherwise taboo topic both approachable and engrossing. Now a licensed mortician with an alternative funeral practice, Caitlin argues that our fear of dying warps our culture and society, and she calls for better ways of dealing with death (and our dead).

You would never expect that a book subtitled “and other stories from the crematory” would manage to be a quick, fun and sometimes even light-hearted read. But Caitlin Doughty’s personal coming of age story is exactly that, even though (she might say because) it also covers her introduction into the funeral industry.

This is a book about death. Not about the terribleness of it, because the author does not espouse the belief that death itself is awful. This is about the acceptance of the inevitability of death into our lives, injecting rationality into a process that is feared, hated, reviled and avoided at all costs.

Except we can’t avoid it in the end. The author’s thesis is that what we’re doing as a society is covering it up, turning something natural into something to be feared and hated. And that some of the lengths we go to in order to avoid even mentioning death and its inevitability.

If the mantra of Dr. Gregory House in the TV series was “Everybody Lies”, than I think it’s fair to say that Caitlin Doughty starts from the premise that “Everybody dies”. Which they do.

Smoke Gets in Your Eyes is both autobiographical and philosophical, as well as containing an extremely readable history of how humans have treated death over the centuries, particularly in Western culture but with some exploration of cultures outside of our own. She parses out the history amid her own story of her adoption into the modern funeral industry as well as her criticisms of it.

She starts out as a 23-year-old college graduate in Medieval Studies (more death, definitely more death) and a fascination with death that is not so much morbid as curious and engaged. She wants to be involved with the funeral industry because what happens to us after the inevitable event (dying) is something that has engrossed and sometimes terrified her since her 8-year-old self watched another child fall from the top of an escalator into silence. She never knew the fate of that other child, but the event, and the fears it generated, changed the direction of her life.

When she starts as a crematory worker, she starts out both deeply interested and slightly scared. We all know people die, but whatever happens behind the black curtain at a funeral home is mysterious to us. And it’s intended to be.

The author talks to us about her journey from crematory worker to mortician’s college to licensed funeral director, but she also details the actual processes that she undertakes behind the scenes.

As well as letting us see the gallows humor she shares with the staff who help her and train her. Her stories can be macabre, but they also bow to the inevitable, we all die. And it is better to face the unknown with knowledge than with fear.

Reality Rating A: Smoke Gets in Your Eyes was the number one pick of the Library Reads list for September 2014, and once you read it, it is easy to see why.

The author’s personal story fascinates, because she is letting us peek into something that we all must face, but that no one ever talks about. Dealing with final arrangements for a loved one (and what happens when there is no loved one) is something that we will all face and become part of in turn. Yet no one talks about it, except in the most oblique terms.

The history of funerals and death arrangements, and the history of the surrounding industry, is broken up into quite digestible bite-sized chunks. It flows very well into the personal story that the author tells, and she makes it easy to see how past practices and practices in other cultures have helped to inform her beliefs.

The people she works with, especially at her first crematory job, have a sense of gallows humor and fatalism that is every bit as funny, in its own way, as the “meatball surgeons” in MASH. No one in this story turns out to be deadpan, except the actual dead.

While her explanations of what happens to the unclaimed bodies, and the way that the scientific donations come to their final and fiery end have more than their share of pathos, this is information that people should have when they make their decisions.

Death is a serious topic, but the author provides a treatment of this usually avoided topic in a way that makes you think, not with fear, but with consideration about the way we will handle the inevitable when it comes.

Some of her conclusions about the long reach of the death-avoidance culture and how it can be changed, left me pondering. A lot. 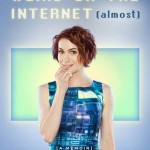 One thought on “Review: Smoke Gets in Your Eyes by Caitlin Doughty”