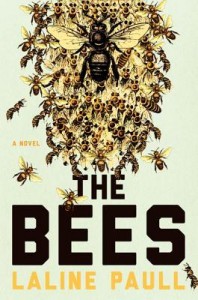 Flora 717 is a sanitation worker, a member of the lowest caste in her orchard hive where work and sacrifice are the highest virtues and worship of the beloved Queen the only religion. But Flora is not like other bees. With circumstances threatening the hive’s survival, her curiosity is regarded as a dangerous flaw but her courage and strength are an asset. She is allowed to feed the newborns in the royal nursery and then to become a forager, flying alone and free to collect pollen. She also finds her way into the Queen’s inner sanctum, where she discovers mysteries about the hive that are both profound and ominous.

But when Flora breaks the most sacred law of all—daring to challenge the Queen’s fertility—enemies abound, from the fearsome fertility police who enforce the strict social hierarchy to the high priestesses jealously wedded to power. Her deepest instincts to serve and sacrifice are now overshadowed by an even deeper desire, a fierce maternal love that will bring her into conflict with her conscience, her heart, her society—and lead her to unthinkable deeds.

I’m not so sure about the comparison in the blurb to either (or both) The Handmaid’s Tale and The Hunger Games, but if it gets people to read this marvelous book, well, it’s done its job.

The Bees is the story of a rigorously structured society where the obedient survive, everyone has their own place, and deviation, or even curiosity, is usually rewarded with death. And while the author sets the story in a beehive, among, naturally, bees, she’s really talking about us.

Of course, Flora 717 and the other bees in her hive think of themselves as people, too. Everyone else that impinges on their world is either an enemy or a myth. Occasionally both.

Flora 717 is different from the other bees in her hive, who are all her sisters, daughters of the Queen, except for the very few male drones. More on them in a bit.

In a hive, only the Queen can breed. For Flora 717, it is both law and religion, and rigorously enforced by mind-numbing scent trails as well as power-hungry priestesses and ruthless Fertility Police. Flora 717 bumps and bumbles her rather large way into every rule and precept of her restrictive hive.

Flora 717 can not only talk, but she can sense the hive mind directly. She also has the capacity to feed the larvae in the nursery, and she is strong enough to fly out of the hive and forage for food.

The hive is in danger. Not just from possible direct attacks, but also from the changing world outside. Pollution reduces their foraging grounds. Rain makes it impossible for the foragers to even go out and find food. Life in the hive is changing, and not for the better.

As Flora 717 finds herself the object of an experiment (and not killed out of hand as an outlier) she is able to view all of the strata of life in the hive, from her lowly roots as a sanitation worker, to the dangerous and desperate freedom of the foragers.

She even briefly ascends to the heights of attending the Queen.

All of the knowledge and experience she gains makes her a leader among her own lowly Flora sisterhood. And gives her the courage to foment her own, quiet and inexorable, rebellion.

Escape Rating A: The way that the author portrays the hive’s institutions works well both as an explanation of bee behavior and as an ironic send-up of human behavior. The priestesses exploit their religious positions to accumulate power. The fertility police are brute enforcers and thugs.

And the drones, “Their Malenesses” are both funny and tragic. Their purpose in life is to die for the good of the hive. Or some other hive. But until their last, tragic flight to create a queen, they are indulged in their every whim, and their very essence makes the female bees swoon at every turn.

Yet their self-indulgence is so often their undoing, as well as the hive’s.

You wouldn’t think that you could be absolutely riveted by the supposedly proscribed (and short) life of a bee. But the story so cleverly couches real (and bloodthirsty) life in a hive into human terms that we can’t help but root for Flora 717 to survive and find a destiny that seems to be outside the proscriptions.

It both is and isn’t, in the end, but the way that it works provokes satisfaction, the sense that things change, but that it is part of the greater whole. Which for Flora 717, turns out to be as it should be.