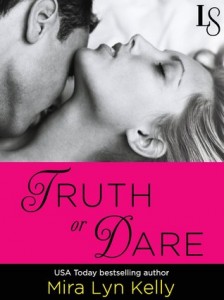 After her one attempt at commitment ends in the worst kind of betrayal, Maggie Lawson vows that the only people she’ll love ’til death do they part will be her friends. Unfortunately that means Maggie letting her bestie rope her into a year-long dating dare: score a new date each month or pay a penalty. Seems doable—until Maggie’s date stands her up, leaving only one option: the sexy stud who just moved in upstairs. The problem? He and Maggie can’t stop fighting—and that’s just the beginning.

His name is Tyler Wells and the last thing he needs is his neighbor distracting him with her girl-next-door smile and sharp tongue. Tyler’s in Chicago for one reason: to woo back his selfish ex in order to reclaim the child he once thought was his—and that means keeping Maggie out of his bed. A tall order, since Maggie has become a bigger temptation than he ever expected to face. But before they can even consider leaving the past behind, Maggie and Tyler must accept a brand-new dare: real, forever love.

Truth or Dare is a frenemies into lovers story that somewhat stretches the willing suspension of disbelief about why these two people try so hard to stay at the frenemies stage.

Maggie Lawson has given up on any commitment deeper than friendship, not that she isn’t deeply committed to her best friends. The reason that this 20-something has not just sworn off relationships, but refuses to even date? Her wedding was interrupted by her groom-to-be’s pregnant wife and children! And she never had a clue that he was in another relationship, let alone that she was the other woman!

The scandal of being branded a homewrecker all over her Florida town sent Maggie scurrying off to Chicago to create a new life with her besties, and without even thinking about searching for love. Ever.

Tyler Daniels moves from New York to Chicago, and into Maggie’s building, because he’s being noble and self-sacrificing and “being there” for his ex-girlfriend, no matter how lonely “there” happens to be.

It’s not because he loves her. He doesn’t. But he does love the little boy that she let him think was his; and then took away when her baby daddy dropped back into her life again. She wants Tyler’s secure finances, and the emotional security he represents, but she can’t seem to resist her bad-boy rocker ex whenever he comes around.

So Tyler is swearing off relationships in the hope that when his ex comes to her selfish senses, she’ll see him for the security he represents, and he’ll get back into the kid’s life. If he has to take her to get the child he loves, he believes it’s a fair trade–but he can’t let himself get involved with another woman, because his ex will take the child away forever. She’s allowed to have a life, but she has to come first in his, whether they are together or not.

So Tyler comes to Chicago, meets Maggie, and acts like a complete jerk. Admittedly, his life is pretty jerky at the time. But Maggie takes his jerkiness and does him one better, she snarks off at him every chance she gets–every time they meet in the hallway, every time they run into each other in the laundry, every single time.

But the way that they exchange one-liners and one upmanship hides the truth, that what they really want is each other. As her friends become his friends, and he becomes part of her inner circle, they find each other more and more difficult to resist. Until it’s too late.

The question is, what exactly is it too late for?

Escape Rating B-: I had a lot of mixed feelings about this story. On the one hand, I enjoyed Maggie’s relationship with her friends a lot. Not just because they are in a Chicago lakefront area that I even recognized, but because it’s so rare to see a mixed-gender bunch of friends that so clearly really love each other and have fun together, among adults, that doesn’t devolve into a whole bunch of messy soap opera relationships within the group.

The only UST (unresolved sexual tension) in this flock is between Maggie and Tyler, and it is, after all, the point of the story.

While I understood Maggie’s desire to swear off romantic relationships on a temporary basis, as a permanent thing I found it a bit much. Or it might be that the triggering event was over the top. Certainly the reasons for Maggie’s public shaming were soap opera worthy. And Tyler’s equally self-sacrificing reasons were also soap opera worthy. Together they equalled too much past my willing suspension of disbelief. Your mileage may vary.

Although I found their reasons for avoiding relationships to be too much, the romantic and sexual tension between them was off-the-pages hot. It was so obvious (in a good way) that these two belonged together, that every time they resisted the pull just fueled the incredibly hot fire. I wanted them to finally figure it out. The push-pull between them was tormenting (again, in a very good way)

So, I felt for the characters, enjoyed them together and with her/their friends, and couldn’t quite get over their unbelievable backstories.