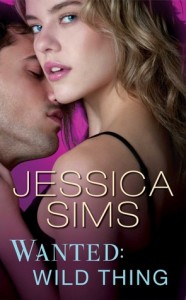 Ryder is hiding a dark secret from her coworkers at Midnight Liaisons. Every time she’s sexually attracted to a man, her dragon side breaks through. Not exactly man-bait! But she needs to lose her virginity before her twenty-fifth birthday, or she’ll become a dragon forever.

Her solution? Big, hunky Hugh, the appointed guardian of her chastity. He’s clearly hot for her, but he has powerful reasons to resist Ryder. Can temptation—and love—possibly find a way?

This is kind of a “fish out of water” story. Actually there are multiple fishies out of multiple waters by the time this story (and the series?) is wrapped. As wild and crazy as the universe of Midnight Liaisons is, it turns out there are plenty of creatures and problems that they still have to discover.

Beauty Dates the Beast introduced Midnight Liaisons, a dating agency for supernaturals. It turns out that the things that go bump in the night really do exist, and they have just as much trouble finding someone to bump in the night with as us normals.

The crew at Midnight Liaisons started out as human, while the clientele they serve is anything but. However, by this point in the series, we’ve watched as human Bathsheba became the mate of an alpha were-cougar; her sister Sara is discovered to be a forceably turned werewolf, and assistant Savannah is a werewolf who exposed the dark side of the gender imbalance between males and females in the werewolf and other supernatural populations.

We always guessed that Ryder was something other than human, but Ryder has done an excellent job of concealing her true nature, partly because she isn’t sure of it herself. All she knows is that whatever she turns into is nasty, messy and ugly, and it comes out every time a guy touches her with lustful intent. Which makes Ryder a 24 year old virgin with a huge problem–if she doesn’t lose her virginity by her 25th birthday, she thinks she’ll be stuck as her ugly self forever.

Everything Ryder knows about herself is wrong. The truth is mostly worse.The story is in the path Ryder takes as she fumbles her way into finding a future for herself that she wants, in spite of her “issues”.

Ryder is a changeling, which throws the Fae into this story in a big way. Changelings are bred, like pets, in the Fae realm. But the Fae realm is pretty lethal to anything not Fae, so Changelings are farmed out to human families who are none the wiser that their child has been substituted.

Ryder thinks she’s a human who changes into an ugly gargoyle. In fact, the change is her natural form, and the closer she gets to her 25th birthday, the more beautiful her supposedly ugly (and slightly draconic) form gets. Except she’s too convinced that she’s ugly to see the changes.

The Fae responsible for her origin comes to claim her, and she finally discovers bits of the truth about herself. The Fae is planning to take her back to his realm and breed her like a poodle, but he has to wait until her 25th birthday for her transformation to be complete.

She needs to lose her virginity before that same 25th birthday, or the Fae will take her away. With threats, blackmail or magic, whatever works. Her Fae “master” leaves a guard with her to make sure she stays virgin until the appointed day.

Of course she falls for the bodyguard, and vice-versa. But the Fae are blackmailing him, too, and with a prize that she can’t compete with; but only if the Fae are telling the truth. Do they ever?

Escape Rating B: I enjoyed this story, even though there were more than a few times I wanted to slap Ryder upside the head and tell her to get a clue. And to hit Hugh upside the head with a clue-by-four while she was at it.

Ryder’s human parents died when she was young, so she doesn’t know whether she got whatever she’s got from them or not. She feels she has a horrible ugly secret, and she’s been keeping it completely secret from everyone since her first period.

Because she thinks her secret is so ugly, she spends her life and her very considerable energy in complete denial. Everything she has or does is overly cute to make up for the ugliness she hides.

She’s also a sucker for anyone who will give her a scrap of information, even if it’s mostly a lie. But as a sucker, she’s in good company with her unwilling bodyguard, Hugh.

She thinks he’s a shifter. While she’s correct, he doesn’t shift into any animal that’s been seen in the wild since before the last Ice Age. He and his people have been kept isolated from the rest of the universe(s) by Fae magic, and only brought out to do Fae dirty work.

That he and his people have also been lied to by the Fae is obvious to the reader fairly early on.

Once you get past their belief in the lies, the reaction of Hugh and his people to 21st century life on Earth is often hilarious. His confusion about the way the world works is something that Ryder is able to exploit to the fullest extent.

These are two innocents, wandering lost together trying to find a way forward that eliminates the threat to their independence and happiness. It’s almost surprisingly that they actually manage to find it.