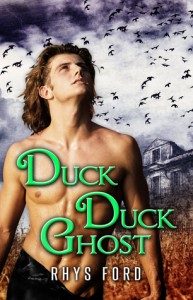 Paranormal investigator Wolf Kincaid knows what his foot tastes like.

Mostly because he stuck it firmly in his mouth when his lover, Tristan Pryce, accidentally drugged him with a batch of psychotropic baklava. Needing to patch things up between them, Wolf drags Tristan to San Luis Obispo, hoping Tristan’s medium ability can help evict a troublesome spirit haunting an old farmhouse.

With Wolf’s sister handling Hoxne Grange’s spectral visitors, Tristan finds himself in the unique position of being able to leave home for the first time in forever, but Wolf’s roughshod treatment is the least of his worries. Tristan’s ad-hoc portal for passing spirits seems to be getting fewer and fewer guests, and despite his concern he’s broken his home, Tristan agrees to help Wolf’s cousin, Sey, kick her poltergeist to the proverbial curb.

San Luis Obispo brings its own bushel of troubles. Tristan’s ghost whispering skill is challenged not only by a terrorizing haunting but also by Wolf’s skeptical older cousin, Cin. Bookended by a pair of aggressive Kincaids, Tristan soon finds himself in a spectral battle that threatens not only his sanity but also his relationship with Wolf, the first man he’s ever loved.

I’ll confess, I was originally going to post the review of this earlier in the month, but when the doll heads tried to smother one of the heroes, my creep-o-meter screamed “HALLOWEEN” and here we are. 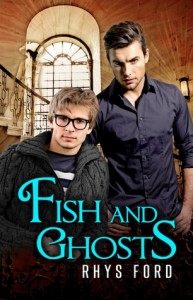 Duck Duck Ghost is Rhys Ford’s awesome (and creepy) follow up to last year’s marvelous Fish and Ghosts (reviewed at The Book Pushers). The Hellsinger series is all about the ghosts.

Wolf Kincaid is the disowned son of the Hellsinger clan. His family, going back for generations, has cast charms and investigated hauntings and exorcised ghosts. They believe in pretty much everything supernatural, even if they also occasionally use other people’s beliefs to con them out of some hard earned cash.

Wolf isn’t sure that there is such a thing as ghosts. He does believe that there is more than we see, but he is also all too aware of some of his family’s shadier exploitations of the supernaturally gullible.

So Wolf went to college, and got himself a doctorate in paranormal studies. Now he’s looking for scientific proof that ghosts exists. Even if he occasionally finds an alligator instead. (Really)

His first proof of the existence of ghosts was the vengeful Winifred at Hoxne Grange. While he needed some help to get the nasty witchy ghost out of the house, he fell hard and fast for the Grange’s resident medium, Tristan Pryce. Tris doesn’t just see ghosts, he draws them to him everywhere he goes, which means Tris hasn’t exactly lived a normal life.

It’s not that Tris never came out, it’s that he never had anyone to come out to, or with. All the other residents of the Grange are benevolent ghosts, at least until Wolf and his team came to document the phenomenon.

So we have two men who are neither of them very good at relationships. Tris has little experience with flesh and blood humans of any kind, and Wolf has way too much practice at being an ass. The happy for now at the end of Fish and Ghosts has fallen apart by the beginning of Duck Duck Ghost because Wolf is scared of loving anyone, and Tris has too many buttons that are too easily pushed. Especially the ones involving trust, so of course Wolf punched all of those.

But Wolf is on a mission to help the few members of his family still speaking to him at the beginning of Duck Duck Ghost. He needs Tris to help him find out whether there really are ghosts haunting his cousin’s farmhouse, but mostly, he just needs Tris. He’s using the trip to San Luis Obispo as a way of apologizing (profusely) and getting Tris to trust him.

The ghosts just want a way to communicate, and Tris gives them that. Unfortunately, all that one of the ghosts wants to communicate is that the murdering rampage she enacted as a child is still the only thing on what’s left of her mind. She wants more victims, and Tris is first in line.

The attack of the killer doll heads is one of her first salvos, and things just get creepier from there. Wolf has to call out all the stops, including begging his bad-ass ghost hunter cousin Cin to come and help them lay this murderous child to rest.

The ghost story is chilly, creepy and even downright scary at points. Just as a Halloween ghost story should be.

Even scarier, it still feels like Wolf and Tris are just back at the happy for now stage in their relationship. I can see a lot more cases of “foot in mouth” disease in both their futures.

Escape Rating A-: In my review of Fish and Ghosts, I said that Wolf and Tristan fit because they fill in each other’s broken places. Their relationship is in a bad place at the beginning of Duck Duck Ghost because they both have a LOT of broken places, and little to no experience at successful relationships of any kind.

They screw up. A lot. It doesn’t help that Wolf sees Tris as fragile and in need of protection, where Tris feels he is anything but. He’s strong in different ways than Wolf, but Tris has dealt with his own ability to summon ghosts wherever he is for his entire life. He’s fought a lot, including his family and himself.

We also see Wolf with his family again, and that bunch is way cool. Also snarkily hilarious. Of course, I’m only referring to the parts of Wolf’s family that are still speaking to him; most of them don’t. Neither Wolf nor Tris has a lot of family to fall back on.

The ghost story at the heart of this book is creepy, chilling and about as much scary as I really want. It’s not just that the ghost is haunting the house, or even that she is destructive on the physical plane, but it’s her original history that stops the heart. She was an evil child when she lived, and she’s an evil ghost now that she is dead.

The scenes of the smothering doll heads and crawling doll limbs still give me the shakes. In a good way. Sort of. They’re very memorable, and very Halloween spooky.