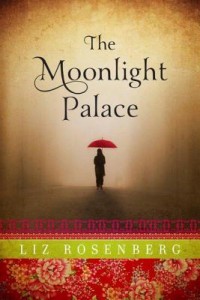 Agnes Hussein, descendant of the last sultan of Singapore and the last surviving member of her immediate family, has grown up among her eccentric relatives in the crumbling Kampong Glam palace, a once-opulent relic given to her family in exchange for handing over Singapore to the British.

Now Agnes is seventeen and her family has fallen into genteel poverty, surviving on her grandfather’s pension and the meager income they receive from a varied cast of boarders. As outside forces conspire to steal the palace out from under them, Agnes struggles to save her family and finds bravery, love, and loyalty in the most unexpected places. The Moonlight Palace is a coming-of-age tale rich with historical detail and unforgettable characters set against the backdrop of dazzling 1920s Singapore.

There really is a Moonlight Palace. Or rather, the setting of this story really does exist, and some of the history that forms the background for this coming-of-age story really happened.

As the Kampong Glam Palace falls apart before her eyes (and under her feet and above her head), young Agnes Hussein negotiates both the shoals of her upcoming adulthood and the rocks of possible rehabilitation (or destruction) for the grand old wreck of a house that she calls home.

Agnes is a descendant of both the last sultan of Singapore and the granddaughter of a decorated British army officer. Her life has a foot in both worlds in the melting pot that is Singapore in the 1920s. As she says, she is half-Chinese, one-quarter Muslim, and one-quarter English. She’s also the only member of her extremely eccentric family with at least one foot in the 20th century.

She’s seventeen, and it seems like responsibility for her family’s (and the palace’s) survival rests on her inexperienced shoulders.

The Kampong Glam Palace is absolutely one of the members of the family. It is falling apart around them, and her British grandfather’s pension, along with rent from equally eccentric boarders, keeps body, soul and house barely together.

Agnes uses a bathtub with boards over it as a desk; only two of the many bathrooms still work and have intact floors and ceilings. Her current “office” is one of the non-functional ones. Chairs crumble, the roof leaks.

When “British Grandfather” dies, and his pension with him, it is the last in a string of bad luck that finally forces Agnes to see her life for what it is, and makes her realize that her future will not be lived in the beautiful but decaying palace that her family calls home.

It is up to her to find a new path that saves them and saves the Moonlight Palace, even if those futures are separate from one other.

Escape Rating B: This is a short book, and that’s just right. It’s both a family story, and a coming-of-age. It also evokes the exotic melting pot atmosphere of Singapore as well as that of a time when the world was irrevocably changing from the slow past to the fast-moving future.

Agnes makes a terrific point of view character. She loves her family and their eccentricities, and wants nothing more than to continue living in the beautiful but decrepit palace that has been her family’s home for so long.

At the same time, she is a child of the 20th century, and wants to do things for herself that are not traditional; like work and fall in love with someone her family might not approve of. It takes a big shock for her to wake up and realize not just that she can’t have everything she wants, but that she must be the one who figures out how to save everyone and everything she loves.

This is a story filled with marvelous, and marvelously eccentric, characters. Not just the crumbling palace, but also Agnes’ multi-generational family, built with both family of blood and family of choice into a slightly crazy whole.

It’s Agnes’ love, and her loyalty, that finds the way forward. Following her as she figures things out and explores her world makes a terrific story.

Liz is kindly giving away one copy of The Moonlight Palace (US/Canada only)! To enter, use the Rafflecopter below.

16 thoughts on “Review: The Moonlight Palace by Liz Rosenberg + Giveaway”