She lives to fight fires

Carly Thomas could read burn patterns before she knew the alphabet. A third-generation forest fire specialist who lost both her father and her fiancé to the flames, she’s learned to live life like she fights fires: with emotions shut down.

But he’s lit an inferno she can’t quench

Former smokejumper Steve “Merks” Mercer can no longer fight fires up close and personal, but he can still use his intimate knowledge of wildland burns as a spotter and drone specialist. Assigned to copilot a Firehawk with Carly, they take to the skies to battle the worst wildfire in decades and discover a terrorist threat hidden deep in the Oregon wilderness–but it’s the heat between them that really sizzles.

Pure Heat is a story about the people who live to fight wildfires; and especially about two people who have been damaged by that love.

Like any kind of drug, adrenaline is addictive. Fighting a forest wildfire is a special kind of addiction – it rewards its junkies with adulation – providing they survive. Even if they don’t always survive intact.

Steve Mercer, “Merks” to his friends and colleagues, used to be a smokejumper, until his leg was permanently damaged in a smoke jumping accident. While it isn’t the kind of accident that anyone could possibly have expected, the damage makes it impossible for him to run either towards or away from a fire, skills that smokejumpers need to survive. The accident took out a significant part of the muscle mass above and below one knee. What’s gone won’t grow back. Steve is lucky he can walk.

But he couldn’t get the need to fight forest wildfires out of his system, so he trained to fly drones over fires, using the data and his experience to spot trouble. He starts his new job, and first outing as a drone specialist, with Mount Hood Aviation as the book begins. 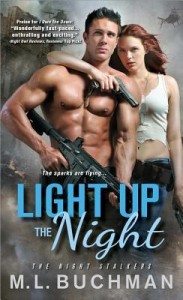 He’s not the only newbie on the crew. Retired SOAR Majors Henderson and Beale have also joined MHA, fresh from the events in Light Up the Night (reviewed here) the last book in the Night Stalkers series. Henderson is in command again, and Beale is still flying Firehawk helicopters. The difference in their lives is that one of them has to stay out of the fire, with their infant daughter.

Henderson and Beale’s presence guarantees that there is more going on than just fighting fires. But it isn’t their story.

The other person invited to this particular party is Carly Thomas. She’s also been mauled by the flames she fights, only the blows that she has taken have burned through to her heart. Her dad raised her in the middle of Mount Hood Aviation after he mother died when she was a child. He went out the way he lived, trapped by a fire he was fighting when she was 16. Her fiance was taken from her a year previously, also consumed by the fire he was fighting. The difference is that her fiance only became a smokejumper because firefighting in the Oregon woods is Carly’s entire life. He loved her, but didn’t love or understand the fire.

Carly is the best Fire Analyst around, but she’s still inside the black zone left after a fire has cleared the forest. Steve waltzes (actually limps) in, and is captivated by the very beautiful and extremely intelligent (also incredibly driven) woman he meets. He doesn’t know her history, or where her broken places are – all he knows is that he wants to get to know her better.

That he continues to put his foot into the wrong place every time they talk makes things easier, at least for her. She’s too busy being annoyed to notice that he’s breached her defenses. She’s afraid to love another man who lives to fight fires.

But as they work together fighting the biggest fire the Pacific Northwest has seen in half a century, they find out just what the other is made of – and that they belong together no matter what it takes.

Escape Rating B+: I loved the Night Stalkers series, so I was very happy to see that the author had found another way to mix romance and adrenaline. The heroes who jump smoke may do different jobs than the pilots and crew of SOAR, but their lives are every bit as dangerous – and thrilling.

And thanks to the presence of Henderson and Beale, occasionally not all that far off from those clandestine missions that SOAR flew. However, their presence as newbies to MHA allows the author to provide readers with a lot of background and information on the history and methods for fighting these devastating fires.  While it occasionally verges on infodumping, the info being dumped is fascinating.

It is unusual to see what happens to the hero and heroine after the happily ever after, so it was great to see how the two Majors move into civilian life. They are absolutely awesome, and it was fun to see Kee Stevenson again and hear how Archie and Dilya are doing. It’s always good to hear that old friends are doing well.

But the primary couple in this story is Steve and Carly. Although the injury that Steve suffered before the book starts was physical, most of the lingering damage is emotional. He’s not sure that he’s still a whole man, or really himself at all, if he can’t still jump smoke. His story is that of finding himself again. Carly helps alot, but he needs to see that what he can contribute in the present is every bit as valuable, albeit very different, than what he did before. He has to feel that within himself, and it’s a long road.

Carly, on the other hand, while extremely competent at the job she loves, is in an emotional blackout. Everyone in MHA knows and loves her, and they do what they can not to touch her where it hurts. Steve wants to know her, and in order for that to happen, she has to reveal what went wrong in her past.

One thought that came to me, about Carly’s fiance. If he’d lived, I wonder if their relationship could have worked in the long run. They may have loved each other, but she can’t live away from firefighting, and he wasn’t suited for it. Eventually, they would have resented each other too much to keep going. But it doesn’t happen that way.

Steve and Carly bring each other back to life. It makes a great romance because they are equal – either they rescue each other or they reach towards each other out of their emotional deserts.

The touch of suspense discovered by Steve’s poor drone was added icing on a very fun (and flavorful) cake. 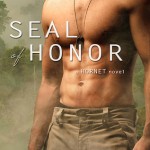