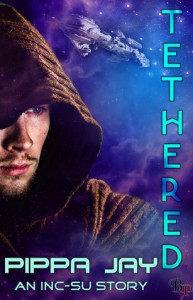 She can kill with a kiss. But can assassin Tyree also heal one man’s grief, and bring peace to a galaxy threatened by war?

For Tyree of the Su, being an assassin isn’t simply something she was trained for. It’s the sole reason for her existence. A genetically enhanced clone—one of many in Refuge—she’s about to learn her secluded lifestyle, and that of all her kind, is under threat by a race capable of neutralizing their special talents to leave them defenseless.

For Zander D’joren, being a diplomat has not only cost him his appearance, but also the love of his life. Scarred, grieving, he must nonetheless continue in his role as co-delegate to the fearsome Tier-vane or risk a conflict that could only end one way.

Now both of them need to keep each other alive and maintain a perilous deception long enough to renegotiate the treaty with the Tier-vane, or throw their people into a war that could wipe out Terrans and Inc-Su alike. But there’s more at stake than humanity, whether true or modified. Can the love growing between them save them both? Or merely hasten their destruction?

Tethered is a high-stakes romance between two people who have to discover the depths of their own hearts and the secrets of their identities while dodging assassination attempts and trying to cement a treaty between two interstellar factions who are both capable of tearing the universe apart.

After all, they’ve done that bit before. The treaty is supposed to keep them from doing it again.

Tyree is a member of the secretive Inc-Su race. While descended from humans, the Inc-Su broke away centuries ago to develop their ability to kill through sex. Inc=incubus, and Su, in context, is short for Succubus. The Inc-Su can absorb a person’s life force during sex. Fairly spectacular sex, so their victims die in ecstasy.

The Inc-Su are a race of contract assassins. In between assignments, they all live together on Refuge, a planet that may indeed be a refuge, but is also a prison. Inc-Su do not live away from Refuge and its rules, unless they are so flawed that they do not possess the Inc-Su powers.

Mirsee was a flawed Inc-Su. She served as a diplomat for the Terrans and even life-bonded with her fellow diplomat, the human Zander D’joren. Mirsee is dead at the hands of mysterious assassins, and the treaty that she and Zander worked so hard for is about to collapse, throwing the universe back to a space-spanning war between the Terrans and their allies, and the feline, predatory Tier-vane.

There is one hope – the Inc-Su can send Mirsee’s clone-sister, Tyree, to take her place as ambassador. Only the intimate members of Zander’s party can know the difference, or the treaty will be declared null and void before it can take effect.

Tyree has two assignments; flawlessly substitute for the sister she never knew she had, and protect Zander and herself from yet another assassination attempt before the treaty is signed and ratifies.

Falling in love with Zander is not part of the assignment. It is not even a likely outcome, as Zander is still mourning for her sister, and Tyree doesn’t have a frame-of-reference for what love is.

Tyree doesn’t do a very good job at most of her assignment. She never seems to be able to sniff out the assassination attempts before they happen – again and again. She even falls in love with the scarred but resolute Zander.

In the moment of victory, she is lost. Zander is left to determine if the treaty was worth the cost of losing the woman he loves. Again.

Escape Rating B+: There were a LOT of things I really enjoyed about this story, and a few things that make me quibble.

In science fiction romance (AKA SFR) both the worldbuilding and the romance have to work equally well for the story to be a solid A Rating. Tethered comes close, but there were just a couple of things…

The romance in this story is between a man who has lost his bondmate to a terrible tragedy, and that woman’s clone-sister. So Tyree looks exactly like Mirsee, and she has to for the diplomatic deception to work.

Tyree is not anything like Mirsee, they just look identical. So Zander ends up falling for his late wife’s identical twin. The growing emotional and sexual tension between Zander and Tyree does sell the romance, but…there’s never a scene where they talk, or Zander talks to himself or whatever, about his change of heart.

He really did love Mirsee. How much of his love for Tyree is based on their iidentical appearance? What changed his heart? Has he just healed in 6 months (possible) or is it, as another book I read called it “foxhole love”. They are stuck in a desperate situation and only have each other for comfort.

Zander is an admirable man. It is easy to see why Tyree falls for him. What is difficult is her acceptance that he loves her and isn’t transferring his love from her “sister” to her without dealing with the consequences. If she does accept it, I wanted more internal dialog, or even external dialog, that she had considered the risks. He hurts her once by calling her Mirsee in a private moment, so this issue doesn’t feel resolved.

On the other hand, she gets kidnapped the second the treaty is signed, so there isn’t a lot of time to deal with crap after their job is done.

The way that Zander was able to rescue Tyree, involving sudden and remarkable revelations about her parentage, felt a bit deus ex machina. In other words, terribly, terribly convenient. She needs to be rescued, very desperately, but the solution was too easy, even if emotionally difficult.

Because the story is relatively short, I wanted more explanation of the current state of the universe than there was time available. How did the Inc-Su split off from the Terrans, and why? The internal politics of both the Terrans and the Tier-vane needed a bit more detail to understand why they reached this state of near-war.

At the same time, the constant state of tension produced by the frequent assassination attempts kept me turning pages furiously to find out what would happen next. There is so much going on in this universe, and I want to see more.