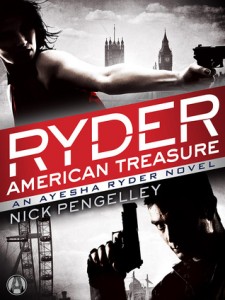 Fast-paced, edgy, and action-packed, the perfect read for anyone who loves the novels of Steve Berry or James Rollins, Ryder: American Treasure marks the return of Ayesha Ryder, a woman digging into history’s most dangerous secrets—and hiding some of her own.

During of the War of 1812, British troops ransacked the White House and made off with valuables that were never returned. Two centuries later, a British curator finds a vital clue to the long-vanished loot. Within hours, the curator is assassinated—and Ayesha Ryder, a Palestinian-born antiquities expert, is expertly framed for his murder.

Who could be behind such a conspiracy? And why do they want Ryder out of the way? To find out, she picks up a trail leading from a mysterious nineteenth-century letter to the upcoming presidential election. As Ryder dodges killers in the shadow of hidden alliances, sexual blackmail, and international power plays, she finds that all roads lead to the Middle East, where a fragile peace agreement threatens to unravel . . . and another mystery begs to be discovered.

Ryder’s rarefied academic career and her violent past are about to collide. And her only hope of survival is to confront a powerful secret agent who has been waiting for one thing: the chance to kill Ayesha Ryder with his own two hands. 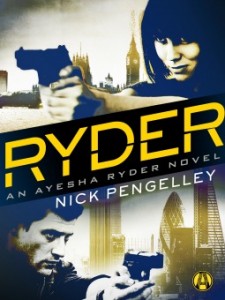 If Lara Croft (Tomb Raider) and Indiana Jones had a love child, it would be Ayesha Ryder. After her first hair-raising adventure (Ryder, reviewed here) Ayesha is still following T.E. Lawrence’s clues to where he hid the Ark of the Covenant.

And yes, that’s the same Ark that Indy found. In a different continuum. It’s still just as awe-inspiring in this story as it was in the movie, and very nearly as deadly. But unlike the movie, this Ark isn’t spewing death all on its own – it’s the human agents that either want to exploit or suppress it who kill.

The Ark isn’t even their focus. There are, as always, lots of bad people after Ryder. But this time, they are following her as she searches for a treasure she doesn’t even care about. In this slightly alternate history, the two contenders for the American presidency want her to chase down the treasure looted from the White House in 1814 when the British took Washington in the War of 1812.

President James Madison, best known to history as Dolley Madison’s husband, supposedly left a clue in his old desk – a letter that named the traitor in his government. By the time the war ended, Madison’s term was nearly over, the British were gone, and the matter was hushed up. But in Ryder’s 21st century, the candidates both want the clue, in the hope of either hushing it up or publicizing it. One of those candidates is a direct descendant of Madison, who does not want his name blackened by association.

So the treasure that Ayesha is hunting for could easily have been part of the movie National Treasure.

After the events in Ryder, Ayesha’s world has gone on a slightly different course than our own in one very important aspect. The Israelis and the Palestinians have not merely made peace, but have banded together to create a single country in the territories belonging to Israel and the Palestinian authority. That new country has been named “The Holy Land”.

While most of the world is grateful to have that war-torn area finally at peace, there are forces in both America and the Middle East who believe that any peace between these peoples is a travesty that must be rectified at any cost, and that as a principal player in the creation of the new state, Ayesha Ryder must be eliminated, and her work completely discredited, with extreme prejudice.

So Ayesha is hunting the Ark, because she is still following Lawrence’s trail. Agents of chaos are following her, murdering anyone who might have information on the Washington treasure and framing Ayesha for their crimes. Their actions are an attempt both to discredit her work and legacy and to make her vulnerable to capture and possibly murder by unwitting police on the trail of a fugitive terrorist.

In another breakneck, cross-country, overnight chase, Ayesha hunts the Ark, while enemies hunt her for revenge. And because they think the Washington treasure will determine the outcome of the next U.S. election in their favor.

When all hunts find themselves converging on the same location, the resulting explosion of information, as well as the riot of bullets, is cataclysmic.

Escape Rating A-: I enjoyed the thrill of American Treasure every bit as much as the first book in the series. However, I will also confess that I could see a bit of formula emerging, and while it’s a formula I liked a lot, it wasn’t quite as fresh as the first book.

But for anyone who likes their thrillers with a DaVinci Code twist, this series is fantastic so far.

One of the things that I love about this series so far is the way that the author hangs the puzzle on real historical events, even if, or possibly because, he stretches the historical ambiguities out into modern-day treasure hunts.

Also, the central figure in much of the history is T.E. Lawrence, who in real life was every bit as fascinating as the author makes him. Lawrence really was involved in a lot of world-shaking events during his life, and there are still mysteries surrounding his death. Ayesha’s continued adulation and hero-worship is not just interesting, but even a reasonable place to start her adventures. A great deal of early 20th century history really does relate to Lawrence in some way.

One of the more twisty things about this series is that the author has chosen to make Ayesha, a former Palestinian terrorist, the protagonist and heroine. The villains are often the Israelis. This choice sets a lot of assumptions on their heads for a lot of people, including this reader. I find Ayesha to be a sympathetic character, while at the same time finding the portrayal of the Israelis as mostly unrelenting baddies to be uncomfortable. Which is often the point of good fiction.

I will say that Ayesha, while her ability to “take a licking and keep on ticking” may be necessary for the speed of the plot, is in danger of becoming a cardboard cutout of the female action hero. I love the idea of a take-charge woman moving the action forward and being the center of the story, but she’s just a bit too good (and indestructible) to maintain belief if she keeps taking this many hits in continuing overnight treasure hunts. For me to continue to feel for her, she needs to feel something more.

Still, if you enjoy wild thrill rides of stories, Ryder and Ryder: American Treasure, are both winners.

This tour includes a Rafflecopter giveaway for a $25 gift card to the eBook Retailer of the winner’s choice + a copy of RYDER, the first book in the series!