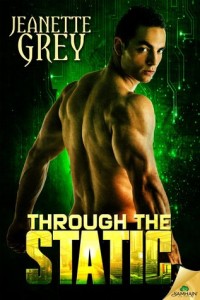 The only way to save him is to let him into her mind…and her heart.

When cybernetics researcher Aurelia Locke is attacked, she instantly recognizes her assailants as a Three—a mercenary unit made up of a trio of soldiers whose minds have been cybernetically linked, their pasts erased, their wills subsumed.

By the skin of her wits, she escapes to an abandoned house, where she hacks its security system in her desperation to find refuge.

Jinx is already on high alert when his Three notices something isn’t right with their safe house. But he never expected to find a woman wounded and bleeding out in his own bed, or that his visceral reaction to her would begin to awaken his lost past from a years-long haze of violence.

In a mad gamble to escape, Aurelia frees Jinx from his Three by severing his neural connection to them and tying his mind to hers. The power of their link shocks them both, manifesting not only in shared thoughts, but in an intensely passionate physical connection.

But dangerous forces pursue them, intent on reclaiming Jinx and silencing Aurelia’s knowledge. Her only chance of saving him is to risk everything—her research, her heart, and her life.

Warning: Contains manipulation of a person’s memory without his consent and brief episodes of mind control, as well as a smart girl on the run, a high-tech soul-bond, and telepathy-enhanced sex.

Through the Static is a story about the things that the unscrupulous will do in order to create supersoldiers. And all the ways that love, affection and even simple human doggedness manage to defeat those who would pervert humanity for their own wealth and (sadistic) pleasure.

Whoever coined the phrase “two’s company, and three’s a crowd” would understand the psychology behind creating these supersoldiers in mind-melded groups of three. Two people form a relationship, or at least consensus. Three people always argue, two against one. In order to settle those arguments, someone else gets control. Or at least that the way the “Threes” work in Through the Static.

That “static” is in the mind of Jinx, one member of a Three whose group is already starting to break down. His two partners, Curse and Charm, have developed a romantic relationship that leaves Jinx in the cold. But members of Threes have their minds wiped and their identities (and free will) taken away when they supposedly volunteered to become part of a Three. Curse and Charm are not supposed to be able to have separate enough personalities to feel anything emotional, just the loyalty to the Three and to their handler that is built into their programming.

Jinx is also experience something that he shouldn’t. In dreams he remembers bits of his past. As if in clouds of static created by his programming, he sees images of a woman he almost knows – and who has eyes just like his.

Aurelia Locke is not a member of a Three. Instead, she is a cybernetics researcher who is being haunted and hunted by multiple Threes, because she and her cohorts have conducted unauthorized research into the way that Threes are made, and the way they can be broken. Or fixed.

On the run from yet another Three kidnapping attempt, wounded and desperate, Aurelia stumbles into an empty cottage a long way off the road. She breaks the security system and collapses, only to find herself under the suspicious eyes of yet another Three. But this is the Three made up of Curse, Charm and Jinx, and their programming is already frayed at the edges. Aurelia is able to make a mental connection with Jinx, and suddenly the situation changes.

With Aurelia in his head instead of Charm and Curse, Jinx is able to experience his own thoughts and feelings without the static. As his humanity returns, he finds himself wanting to protect Aurelia at all costs. He also just plain wants Aurelia, feelings that members of Threes aren’t supposed to have, except of course that his partners clearly do.

Jinx and Aurelia escape, and that’s where things get hairy. There are no coincidences. Aurelia is researching Threes because it is her own discoveries, perverted by a ex-lover, which took something that was supposed to help couples bond and perverted it into the creation of mindless mercenary assassins.

Aurelia wants to protect her research. She wants to save Jinx, to give him the chance at a life he never had, even if it isn’t with her. Jinx wants to be free of everything except Aurelia. But his past reaches out to pull him into the future, and her past kicks the door down and tries to wipe out any chance either of them might have to live.

It all comes down to an internal struggle to see who has more control, Jinx, Aurelia, or the meddling mastermind who won’t let either of them go.

Escape Rating A: The Threes remind me a bit of Robocop or the Terminator, attempts to create supersoldiers by removing any possible capability for human feelings and emotions, either by memory wiping and torture, or by not putting them there in the first place. (In a strange coincidence, my book for tomorrow, In the Devil’s Nebula by Anna Hackett, also explores this theme).

Unlike some of the antecedents for cybernetic supersoldiers, this version does not use implants to create massive armor or even massive muscles (or the equivalent). The process works by removing the original personality and replacing it with something without a conscience, but with an inbuilt requirement to obey they authority of their programmer and absolute loyalty to the members of their Three. Everything else appears to be training.

So, it’s the lack of a conscience that allows the Threes to function as heartless mercenaries, because their hearts have been programmatically removed. The only problem, from the perspective of the person controlling the Threes, is that the program is breaking down in the longest-serving Threes, and they need Aurelia’s research to shore up the gaps.

The problem, from the perspective of Aurelia and her colleagues, as well as from the emerging Threes themselves, is that no one volunteers for this shit. People are kidnapped and reprogrammed against their will into doing things that most of them would find heinous. Also, the programming is breaking down and while they may not remember their original lives, the internal conflict is eating them alive.

Aurelia intends to free Jinx. Jinx just wants to keep Aurelia safe, and also, simply to keep her. There is a certain amount of mutual Stockholm Syndrome going on, but it works in this story. They have come to rely on each other because of the mental connection that Aurelia creates between them. But the more she tries to set Jinx completely free, the more it backfires on both of them. They need each other for a whole lot of reasons that go beyond their original mutual kidnapping.

The bond also enhances their absolutely smoking-hot chemistry. But the love scenes are more than pure sex. Jinx doesn’t remember love or affection, so his experiences are heightened because for him it is the first time for so much in so many ways.

The SF part of Through the Static sets up a gritty world where technology has been abused. The R part of the equation is combustible. And the blending into SFR is explosive.