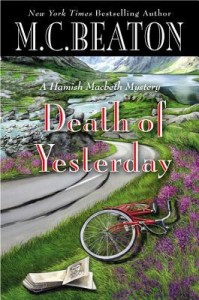 Scottish Highland Sergeant Hamish Macbeth disbelieves summer student Morag – she lost memories of her pub night and sketchbook – until she turns up dead. As does witness, layabout Fergus. In Cnothan, “sour locals” take “pride in keeping themselves to themselves”, to keep their jobs at the Gilchrist dress factory. In past amorous attentions and police politics lie answers. 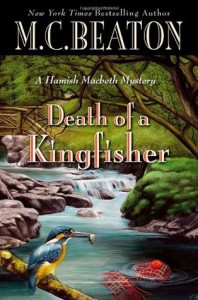 It’s been a while (see review of Death of a Kingfisher, here) since I read one of the Hamish Macbeth series, and I had forgotten how much fun they are. At least in small doses.

At the beginning of each story, someone dies. That someone is inevitably an outsider to Lochdubh or at least to Sutherland. This relatively unpopulated portion of the Scottish Highland couldn’t afford to lose as many locals as generally get killed off in the course of one of the books.

Also, most of the action in this one takes place in the nearby village of Cnothan, a place that Hamish has never liked and has never seemed welcoming to anyone at all. The villagers do an all too good job of “keeping themselves to themselves” in the face of outside intrusion. Which makes pretty much everyone we are introduced to in this story not terribly sympathetic, as well as generally obstructing a police investigation.

This story takes place during the depths of the Great Recession, not that the economy in this remote area is all that fantastic at the best of times. But the recession plays into the story, as the murder(s) that occur are all wrapped up in the one bright economic light in the rather dour Cnothan area. A clothing factory has opened nearby, courtesy of a government project to bring jobs to the Highlands. No one wants to say anything about anything that might put the future of their employer at risk.

And it definitely is at risk. The first murder victim is a totally unliked and unlikeable young woman named Morag Merrilea, and she is anything but merry. She claims to have been drugged while sketching at a local bar, and blacked out. She is such a bitch about the town and her job and all the people near her that Hamish decides she must have been drunk and simply refuses to admit it.

This isn’t one of his brighter moments. Everything that happens in the rest of the story hinges on Morag’s sketchbook, and exactly what she saw that she shouldn’t have. But Hamish is too busy, first mooning over the gorgeous sister of one of his suspects, and then avoiding her after he discovers that her beauty is even less than skin deep to figure out what is really going on.

Interference from both Detective Chief Superintendent Blair and his boss, Superintendent Peter Daviot, also causes this case to go through a lot more twists and turns than should be necessary to reach its conclusion. Blair, as always, does his level best (which sometimes isn’t very level) to get Hamish removed from the case if not the entire police force, and Daviot can’t imagine that any of his elite “friends” could possibly be involved in anything sinister.

Until Hamish proves that some of them very definitely are.

Escape Rating B: I have a soft spot in my heart for this series; it was one that I used to listen to on audio back in the days when I had long commutes. Mysteries are perfect for audio, it’s incredibly awkward to fast forward to the end, especially when you’re driving.

The town of Lochdubh and Hamish’s life lend themselves to a slow and leisurely reading (or listening) pace. Not much happens in Lochdubh, until suddenly there are bodies everywhere.

The stories do follow a kind of formula. First there’s a body. Then there’s a case that either nobody wants to investigate or that Blair takes away from Hamish because Hamish is way smarter than he is. In the end, Hamish lets Blair take the credit because he doesn’t want to be promoted away from Lochdubh.

There are generally a lot of red herrings. Both because Blair usually gets Hamish out of the way by sending him on a wild goose chase, and because Daviot refuses to allow an investigation into his friends and the members of his club, who often turn out to be at the bottom of something nasty.

Blair usually gets hospitalized for either his heart or his alcoholism, and Detective Inspector Jimmy Anderson is put temporarily in charge. Anderson lets Hamish get the job done until Blair is back on the scene and mucks up everything.

Hamish either gets involved with some woman he shouldn’t or one of his two previous loves reappears to mess him up again. Sometimes both. In this case, both.

This is a series where the journey is way more important than the destination. I generally enjoy this particular journey, the countryside is beautiful and at least some of the locals are friendly.

One thought on “Review: Death of Yesterday by M.C. Beaton”