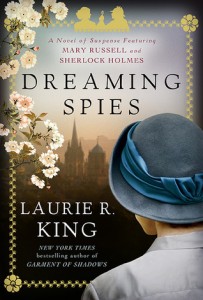 After a lengthy case that had the couple traipsing all over India, Mary Russell and Sherlock Holmes are on their way to California to deal with some family business that Russell has been neglecting for far too long. Along the way, they plan to break up the long voyage with a sojourn in southern Japan. The cruising steamer Thomas Carlyle is leaving Bombay, bound for Kobe. Though they’re not the vacationing types, Russell is looking forward to a change of focus—not to mention a chance to travel to a location Holmes has not visited before. The idea of the pair being on equal footing is enticing to a woman who often must race to catch up with her older, highly skilled husband.

Aboard the ship, intrigue stirs almost immediately. Holmes recognizes the famous clubman the Earl of Darley, whom he suspects of being an occasional blackmailer: not an unlikely career choice for a man richer in social connections than in pounds sterling. And then there’s the lithe, surprisingly fluent young Japanese woman who befriends Russell and quotes haiku. She agrees to tutor the couple in Japanese language and customs, but Russell can’t shake the feeling that Haruki Sato is not who she claims to be.

Once in Japan, Russell’s suspicions are confirmed in a most surprising way. From the glorious city of Tokyo to the cavernous library at Oxford, Russell and Holmes race to solve a mystery involving international extortion, espionage, and the shocking secrets that, if revealed, could spark revolution—and topple an empire.

The title of this book is a pun, based on poet Matthew Arnold’s description of Oxford as the “city of dreaming spires”. It is fitting that this title derive from poetry, as many of the chapter headings are snippets of haiku, and the repeated theft of a book by Matsuo Bashō, one of the early masters of the haiku form of poetry.

There are also plenty of points in the story where it seems that some, or all, of the spies are, in fact dreaming. Or at least daydreaming. One of the unusual aspects of this case is that Russell and Holmes do not seem to be the prime movers of events. They are acted upon more often than they are acting. They believe (perhaps dream) that they are the “Plan A” of much of the mystery that is solved. But at the end, they discover that they have always been “Plan B” or sometimes even “Plan C” for the person who has been in control all along. 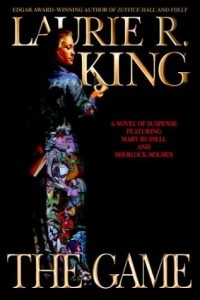 Although this story takes place upon their return from California and the events in Locked Rooms, the actions in the “present day” mostly serve as a frame to a story that happened earlier in their journey. Dreaming Spies tells of the events in Japan that have been hinted at in previous books, and most of the action takes place between The Game and Locked Rooms. Also between The Game and the Holmes insert into The Art of Detection, which seemed to occur simultaneously with Locked Rooms.

As much as I love this series, I will confess that the time-line is getting very confusing. The series is on book 13, but it takes place between books 7 and 8.

This mystery begins with the arrival of a large rock as well as the gentlemen to place it properly in Holmes’ garden in Sussex. While Holmes and Russell have not yet returned when the rock is, let’s say installed, the report from Mrs. Hudson is enough to connect the new addition to events they participated in while on their way to and in Japan.

They began by being bored. Well, at least Holmes was bored. It was a long cruise from India to Japan, and while Russell was quite content to read her books, Holmes, as usual, was not.

To keep Holmes from jumping overboard (not quite but almost) he began a private investigation into some strange occurrences on the ship. His inveterate curiosity was aroused by the presence of an old foe – a blackmailer who he put out of business, but was unable to put away. Holmes has never believed that the man was not fully complicit in the old scheme, but Russell finds him not quite bright enough to has masterminded anything. So the question regards what he might be up to now, and who is the brains of whatever it is.

More than they ever figure out, until the very end of the caper. Holmes starts by chasing an old enemy, and ends by discovering that he and Russell have been used by the Crown Prince of Japan.

That they would have helped anyway is never a question. That someone was able to keep them in the dark and still get their help makes her a much better spy than even one of Mycroft’s operatives.

That nothing is as it seems, and that our heroes do not even have a glimpse of how they have been tricked (all in a good cause) makes Dreaming Spies an extremely interesting case. The game is indeed afoot, but for once, it is not Holmes” or even Russell’s, game. 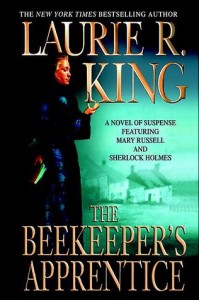 Escape Rating B+: I love this series, and have ever since The Beekeeper’s Apprentice more than ten years ago. However, the timeline is getting extremely confusing. This story takes place before Mary’s falling out with Mycroft, which makes her initial suspicion that Haruki Sato is one of his agents somewhat perplexing.

The story of Holmes’ and Russell’s involvement with the blackmailer that turns into a scheme to protect the young Crown Prince of Japan from his own foolishness builds slowly and wraps itself around both the reader and the Holmeses like the folds of a sari, to mix metaphors and Holmes’ adventures.

Holmes and Russell think that they are helping an agent of the Japanese crown to recover some stolen property. It wasn’t stolen from him, he gave it away first. Holmes wants to finally see one of his old enemies get his just deserts, and Haruki Sato wants to get the stolen secret document back for her Emperor.

Haruki is an absolutely fascinating character. She is nothing like she appears to be, and Holmes never penetrate all her layers of deception. She manages to use him, and that is a rare feat.

Through Haruki and the tasks she sets for Holmes and Russell, we get both an introduction to Japan and its culture in the years between the wars, and a less sensational but more realistic description of what it meant to be a ninja in service to the Crown. Along with a heart-breaking view of what that service may cost.

Haruki’s mission is to save face for the Crown Prince, no matter what she has to do or suffer along the way. We understand at the end that Holmes and Russell would have gladly helped her without her deception, but that she couldn’t count on that. We know they would not have said “no”, but she can’t be 100% certain, so she brings them into her plans unwittingly.

Something that always gets my attention is the reminder of how close the author has brought Sherlock Holmes to our own time. We think of Holmes as a creature of the Victorian Age, but he is alive and active in the 1920s at this point in the story. The Crown Prince of Japan, who later becomes Emperor, is Hirohito, who was the Japanese Emperor during World War II. We see him here as a young man, just learning the intricacies of his future role. But Hirohito died in 1989, a period very much within living memory.

The story in Dreaming Spies is a slow-building one. We start with a cruise that should be a time of relaxation, and end at a breakneck pace as Haruki finally finds the item she has been searching for all along, and Holmes finally uncovers the man behind the old blackmailer. It is seldom that Holmes is in a case where he is outplayed, so watching him both lose and win at the same time was a treat.