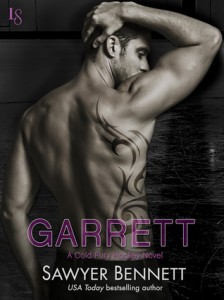 Carolina Cold Fury star Garrett Samuelson never wants to miss out on a single minute of fun. Whether he’s playing hockey, hanging out with friends, or walking the red carpet with a new date on his arm, he lives every day to the fullest. When he meets Olivia Case, he sees someone who’s exactly his type—confident, sexy, smart . . . his next fling. But the more he pursues her, the more Garrett shares a side of himself that other women don’t normally get to see.

Olivia has been keeping a secret. While Garrett lives for the next thrill, Olivia’s not sure she’ll live to see the next day. She’s undergoing treatment for some serious medical issues, and she doesn’t have time for a relationship with no guarantees—especially one with a hot-as-sin womanizer who won’t take no for an answer. But as she gets to know the real Garrett, Olivia can’t help falling for him . . . hard. To reveal the truth would mean risking everything—but you can’t score without taking the tough shots.

I read the first book in this series, Alex (reviewed here) as a review assignment for Library Journal. And it absolutely hit the spot. I just plain enjoyed it, even though the hero starts out as a complete arsehole and the heroine occasionally comes off as Pollyanna. They grew towards each other, suffered a bit, and found their HEA. As icing on the cake, the group surrounding the Carolina Cold Fury hockey team were a fun bunch, and when I saw Garrett it looked like a great chance to see more of them.

Which it absolutely is. And because this is the second book in the series, we meet even more people and the world takes on a bit more depth. (It’s also nice to see Alex and Sutton again and see that their happiness continues.

Garrett is Alex’ best friend, now that Alex has become a real human being and is capable of having a best friend. Or any friend at all. (Read Alex for deets).

And Olivia is Sutton’s cousin, and one of her best friends. It was inevitable that Garrett and Olivia would meet. It was not inevitable that they fall in love. They begin with two strikes against any possibility of a relationship.

Garrett is the “king of the one-night stand”. He falls into bed with nearly any woman who offers, but always flees by the next morning. He NEVER comes back for a second date. He’s definitely a man-whore, and doesn’t care who knows it.

Olivia has just been diagnosed with cancer. It’s a slow-growing, easily treated type of cancer, but still cancer. And treatable does not mean curable. Her best diagnosis is that she will go into remission and stay there for years, and that when it crops up again she can repeat the cycle. She feels like someone has just lowered the boom on the rest of what she expects to be a relatively short life.

When they meet, sparks just don’t fly, they explode like an aurora. Garrett seems to be looking for his usual one-night stand, and Olivia is looking for a distraction, but she doesn’t take him up on his offer.

It’s only after Olivia gets a serious talking-to by her bestie and boss, Stevie, that she decides that a hot, sweaty sexual distraction is just what she needs to feel alive. She’s not worried about getting involved with Garrett, because the man just doesn’t do relationships. After all, he doesn’t do second dates. Olivia is expecting one glorious night, and a good-bye note in the morning.

Instead, she gets Garrett back at Stevie’s flower shop the next day, wanting another date. She still thinks he’ll disappear soon, his record is three dates. She’s sure he won’t be around by the time she has her first chemotherapy treatment.

Instead, they form a connection, based not just on fantastic sex, but also on a shared sense of humor and the ability to make each other laugh.

It ends up being Garrett who holds her hair back as she pukes after her first chemo. So she finally lets the cancer cat out of the bag she’s been keeping it in. And Garrett decides that he’s way too interested in Olivia to walk away.

The story in this book is the ups and downs of their relationship as Garrett decides he’s all in for a woman and a relationship, and that he’ll be there for her whatever happens. Even after the death of a teammate’s wife brings home to him just how devastated he would be if Olivia lost to the cancer.

He thinks the pain is worth the risk. She decides that he will be better off suffering less now than more later after they build 10 or 20 years of life together. So she runs.

There’s more than enough stupid to go around in the way that Olivia handles things. Ironically, it is former arsehole Alex Crossman who makes her see the light, and give herself and Garrett a second chance.

Escape Rating B: Unlike Alex, Garrett starts out the book as a likable and friendly guy. He knows he’s a man-whore, he admits that he’s out for a good time and that sex is a very good time. He’s enjoying sowing his very plentiful wild oats. He doesn’t do relationships and he’s pretty upfront about it.

Because of Garrett’s track record, both Alex and Sutton discourage him from chasing Olivia.

Olivia has just been hit with one of the worst things that can happen. She’s 25 and she’s just been told she has cancer. She is reeling. Stepping out with Garrett is the opposite of her usual behavior. She normally likes to get a to know a guy and see if they have any connection before hopping in the sack.

But she has just discovered that her life is shorter than she realized, and Garrett is a big and gorgeous distraction from everything that has just gone wrong.

Neither of them expects him to stick around. Olivia never stops worrying that he will leave when things become too difficult. She needs him to be all in, or she needs him out of the way before he breaks her heart. No matter what he does, no matter how much he shows her that he loves her, she’s never quite able to accept that he really is going to be there for her if things get really tough.

Her act of stupidity is pretty damn stupid, but makes a kind of backwards sense from her perspective. She says she’s protecting Garrett, but she is really trying to protect herself. She’s not listening to that little voice in her head that says it’s already too late. But then again, the only voices she’s hearing in her head are the ones that say she has cancer and she’s going to die before she turns 45.

There is a tragedy in the middle of this book, and its not Olivia’s. One of the other players, Zack, loses his wife in an automobile accident. The event brings home to everyone that life is much too short. Garrett’s and Olivia’s reactions to Gina’s death cause the grand misunderstandammit that almost does them in.

As I read this book, I kept wondering how the author was going to get this story to an HEA. Not because the relationship doesn’t stand the test, but because the heroine has an illness with a median life expectancy of 20 years. I thought we might end with a Happy-for-Now. Instead, the author chose to write an epilog set 40 years in the future, showing everyone in their 60s and Olivia still alive and having been cured by medical advances in the meantime.

While I understand the desire to reach an HEA by whatever means necessary, the epilogue felt “tacked on”. One of the good points of a series with interrelated characters is that we get to find out how couples from previous books are doing in subsequent ones. The discovery in that is gone because we know how everyone turns out far in the future.

And yes, I prefer my Harry Potter without the damn epilogue too.