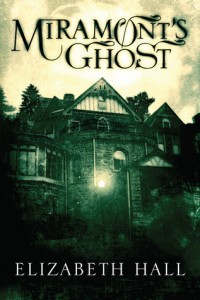 Miramont Castle, built in 1897 and mysteriously abandoned three years later, is home to many secrets. Only one person knows the truth: Adrienne Beauvier, granddaughter of the Comte de Challembelles and cousin to the man who built the castle.

Clairvoyant from the time she could talk, Adrienne’s visions show her the secrets of those around her. When her visions begin to reveal dark mysteries of her own aristocratic French family, Adrienne is confronted by her formidable Aunt Marie, who is determined to keep the young woman silent at any cost. Marie wrenches Adrienne from her home in France and takes her to America, to Miramont Castle, where she keeps the girl isolated and imprisoned. Surrounded by eerie premonitions, Adrienne is locked in a life-or-death struggle to learn the truth and escape her torment.

This is a compelling story, in an insidious, creepy, scary sort of way. I finished at 3 am with the shivers, so be warned.

I will say that Adrienne’s story gets under your skin. Well, at least my skin. On the one hand, I felt incredibly sorry for her. Her brief and heartbreaking life consists of one loss after another. And even though she is clairvoyant, and can see what is coming before it happens, she isn’t able to prevent a single thing that is done to her.

Yes, everything that happens is done to her, not by her. By the end, the only agency she has in her life is the ability and desire to end it. This is a very tragic story, but much more in the creepy than the weepy vein.

Adrienne starts out the story as a child in a noble family in rural France in the late 1800s. In her small family, her grandfather adores her, her mother neglects her, and her aunt hates her with a passion beyond reason.

Adrienne has visions. She sees the past, the far away present, and sometimes the future. None of it does her any good. Her grandmother had the same sight, and it caused her nothing but trouble. Even worse, it caused the servants and the townspeople to gossip and shun her.

Adrienne starts seeing activities in the village that she can’t possibly have witnessed, and it all goes downhill. Her only protectors are her grandfather and her governess. Time takes away her beloved grandfather, and her aunt’s machinations remove her governess.

It’s impossible to overemphasize how much her aunt hates her. When Adrienne is a young woman, she falls in love. Aunt Marie ensures that her beloved is sent to South America, and then that her governess is removed. As a finaly blow, Marie carries her off to Colorado with her mother’s neglectful consent. As soon as they arrive in New York, Marie sends a message back home that Adrienne died at sea.

It is only then that Adrienne’s nightmare really begins.

Escape Rating B: Once I got involved with Adrienne’s story, I found this thing impossible to put down. At the same time, I wanted to shake Adrienne until she stopped being so damn passive and took some charge of her own life.

Considering the time and the circumstance, Adrienne’s complete passivity to her fate was probably historically accurate. She was an upper-class young woman of 16 or 17, with an education in the arts and no practical knowledge whatsoever. Her aunt dragged her off to a country where she did not speak the language and made sure she had no money. She was also kept a virtual prisoner.

Why? That’s a good question. It is possible that her aunt silenced and imprisoned her to prevent her from speaking out about her cousin Julien’s (Marie’s son) sexual abuse of her when she was a child. It’s possible that it was punishment for making the family she subject of gossip yet again, as she repeated her grandmother’s talent for true visions.

As her cousin Julien has become a Catholic priest, the accusation of child molestation would be particularly problematic, especially since the accusation has been repeated in parishes that he has served in North America. While a young woman accusing a pillar of the community of sexual abuse that happened 5 or 6 years previously might not be believed, as fuel added to a current fire, it would have caused a lot more heat to be aimed at the priest.

But we don’t actually know for certain. The speech that the villain makes near the end, explaining it all to the poor victim may be melodramatic but does serve to wrap things up for the audience. We don’t get that here. We only see what Adrienne sees, and only know what she knows. Unfortunately for the audience, the one thing that Marie is excellent at is keeping her thoughts and feelings to herself, even as she commits acts that are increasingly evil.

The author has woven her ghost story into the cracks in the history of a real place, Miramont Castle near Colorado Springs. Jean Baptiste Francolon built the castle, and was forced out of town to escape a lynch mob. He was even poisoned with his own chalice while serving Mass.

In this story, the author tells the history of the ghost who haunts the castle. Or rather, she lets the ghost tell her own story as she decides whether, a century after the events that ended her life, she has finally achieved enough detachment to let go.

After everything that happened to her, I’m not sure a single century would be enough!

Elizabeth and Lake Union Publishing are giving away one copy of Miramont’s Ghost to one lucky U.S. or Canadian winner.
a Rafflecopter giveaway