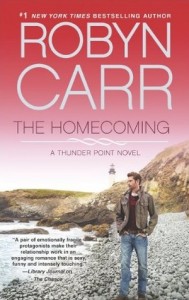 At the age of nineteen, Seth Sileski had everything. A superb athlete and scholar, handsome and popular, he was the pride of Thunder Point. Destined for greatness, he lost it all in a terrible accident that put an end to his professional football career when it had barely begun. The people in his hometown have never forgotten what might have been.

Seth has come to terms with the turns his life has taken. But now he’s been presented with an opportunity to return home and show his father—and the people of Thunder Point—he’s become a better, humbler version of his former self.

Winning over his father isn’t the only challenge. Seth must also find a way to convince his childhood neighbor and best friend, Iris McKinley, to forgive him for breaking her heart. With his homecoming, will Seth be able to convince the town, his family and especially Iris that he’s finally ready to be the man who will make them all proud?

I ended up reading this very late one night last week. I had just finished the book for Friday’s review at The Book Pushers and I really wanted something that would be lighter and have a happy ending. (That particular book was compelling but exceedingly dark, grim and twisted, and turned out to be not my cuppa). So I wanted to read about mostly good people who fix something in their world and find their happiness.

Robyn Carr’s Thunder Point series has always delivered, and The Homecoming was no exception – thank goodness!

I have reviewed the entire Thunder Point series so far, and next week I’ll finally be caught up to One Wish. But first, we have The Homecoming.

The one word titles for this series (so far) have always encompassed a facet of the main character and/or the plot. In this case, it is Seth’s Sileski’s homecoming. In high school, Seth was a star football player, and everyone expected him to have a stellar career in the pros. He was even drafted while still in college, and signed with the Seattle Seahawks. Then tragedy struck, in the form of testosterone poisoning and a career- ending car accident. Seth was going 80 in a 50 zone in his new Ferrari and t-boned a middle-aged man who ran a stop sign, driving while asleep from working overtime on a second-shift.

Seth’s career was over. The damage from the accident left him with a shattered leg. Although many surgeries and extensive rehab later, he was able to walk again, football was out of the question. Still, Seth was lucky. Oscar, the driver he hit, was left a quadriplegic, with a wife and children still to support, and no hope of ever working again.

Unbeknownst to everyone, Seth gave the remainder of his signing bonus to Oscar and his family, even though Seth won the civil suit. He was young and in comparatively better shape. He still had options. Oscar didn’t.

Seth took those options and finished his education in law enforcement. Then he had to apply, and apply, and apply for a job in the Sheriff’s Department. While he passed the physical every time, his limp made the Department nervous about his ability to chase down criminals. Eventually, they gave into his persistence, and signed him on as a Deputy. They were never sorry, and Seth found his calling. 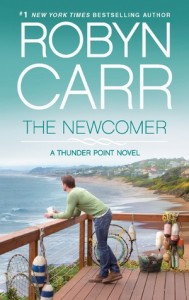 A calling which has finally brought him back home to Thunder Point. Sheriff “Mac” McClain has been promoted to Lieutenant and transferred to the central office in Coquille. (Mac and Gina’s story is told in The Newcomer, reviewed here). Thunder Point needs a new Deputy Sheriff to run the substation, and Seth wants to come home. He wants to try to make peace with his father before its too late. And he wants to re-connect with the girl who got away. He just doesn’t know that he threw her away, and she still hasn’t forgiven him.

Iris and Seth were best friends from the age of 4 to the age of 17. There was only one thing wrong with that friendship – Iris fell in love with Seth, and Seth took her for granted and used her as a sounding board whenever he had problems with a girlfriend. Iris thought friendship was all she could get, until one night she dragged an extremely drunk Seth out of a party, and he cried on her shoulder because his girlfriend had cheated on him and they had broken up. In his drunken state, Seth never remembered that he invited Iris to the prom, and that they had taken each other’s mutual virginity.

Iris had had enough. For one weekend, she was over the moon with happiness – then Seth crushed her without a second thought. He blacked out most of the events of that night. Iris never forgot.

This reader is grateful that the author did not go the “secret baby” route. There were no physical consequences to that night, only emotional ones.

Now that Seth is back in town for good, he wants to figure out where his relationship with Iris went so horribly wrong, so that he can get things back on track. But he doesn’t want to be just best friends anymore. Iris is the one woman he has never been able to forget, and this time, he wants a chance at forever.

He just doesn’t know how much crow he’s going to have to eat first.

Escape Rating A-: I just plain loved this one. I recognize that some of that was “right book at right time”, but I still had so much fun that I was up until 3:30 am because I wanted to finish it.

Iris is a terrific character. She’s a high school guidance counselor because she wants to help kids, and because the guidance counselor when she went to Thunder Point High was a useless waste of space. Iris was not the most popular or beautiful girl in high school (most of us aren’t) and she wants to watch out for the kids and give them the kind of help and advice she didn’t get.

The subplot in this story is about a girl who is being abused, but won’t admit it. Iris is tenacious at figuring out who the abuser is, and handling it properly even though she knows it is going to make a big stink and possibly cause her trouble. I also liked that all the officials involved did the right thing, regardless of the possible consequences to themselves. This is a town where everyone steps up when needed.

There’s also a minor subplot, or at least a thread that keeps floating around, that being at the pinnacle of success in high school is not necessarily a recipe for adult success or happiness. Seth recognizes that while the accident was definitely a blow, he may have come out of it a better person. Iris is certainly better adjusted and more successful than the girl she envied so much in high school.

I liked the way that Iris and Seth finally got together. Seth didn’t remember what had happened, and Iris hadn’t told him. While he needed to eat several helpings of “humble pie”, Iris needed to admit that she was holding him responsible for something that she had an equal share in. They were both 17 and dumb. It happens. She was also afraid to trust him again because he did take her for granted back then. He had to show that he had changed, that he wasn’t still that same boy.

The other heartwarming part of the story involves Seth’s relationship with his dad. Their lack of communication had led to all sorts of assumptions that needed to be straightened out. The scenes where the light finally dawns were warm, sweet and grumpy all at the same marvelous time.

One thought on “Review: The Homecoming by Robyn Carr”