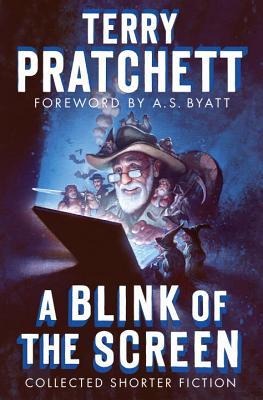 A collection of short fiction from Terry Pratchett, spanning the whole of his writing career from schooldays to Discworld and the present day.

In the four decades since his first book appeared in print, Terry Pratchett has become one of the world’s best-selling and best-loved authors. Here for the first time are his short stories and other short-form fiction collected into one volume. A Blink of the Screen charts the course of Pratchett’s long writing career: from his schooldays through to his first writing job on the Bucks Free Press, and the origins of his debut novel, The Carpet People; and on again to the dizzy mastery of the phenomenally successful Discworld series.

Here are characters both familiar and yet to be discovered; abandoned worlds and others still expanding; adventure, chickens, death, disco and, actually, some quite disturbing ideas about Christmas, all of it shot through with Terry’s inimitable brand of humour. With an introduction by Booker Prize-winning author A.S. Byatt, illustrations by the late Josh Kirby and drawings by the author himself, this is a book to treasure. 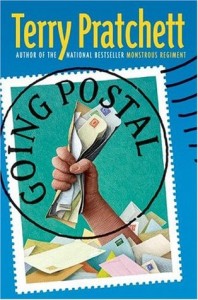 In Going Postal, Terry Pratchett wrote, among many other marvelous things, that, “A man is not dead while his name is still spoken.” If that maxim is true, it will be a very long time before his legacy is finished. This review of A Blink of the Screen is just one of many millions of ways that his spirit is being kept alive.

This collection, finished before the author’s death, contains all of Sir Terry’s published shorter works, including his first published short story, written at the age of 13.

Not many writers would willingly dust off their juvenalia and put it out there again to be commented on and laughed at. The Discworld generally produces laughter, but that is more in the line of “laughing with”. Anything that most of us wrote at 13 would expect to get a great deal of “laughing at”.

While I would not say that The Hades Business is the best thing I have ever read, by Pratchett or anyone else, it hangs together surprisingly well for a story that the author wrote just barely into his teens. It shows the beginning of Pratchett’s trademark sideways humor, and has a darn good payoff at the end.

The two non-Discworld stories I enjoyed the most are The High Meggas and Turntables of the Night. Also Once and Future, as an interesting twist on the Arthurian Tales. 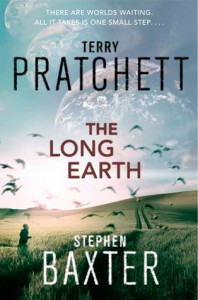 The High Meggas is one of the stories that became the seed of The Long Earth series. It’s a story about survival and cunning in an era where the theory of parallel universes has been proven, and is being used to visit and/or exploit all the survivable parallel Earths in the wake of a catastrophe. The main character is a paranoid survivalist, who is utterly correct in his paranoia – they really are out to get him – unless he gets them first. The way that the parallel Earths are traveled to reminds me of both S.M. Stirling’s Conquistador and Charlie Stross’ Merchant Princes series, both of which very much post-date The High Meggas.

Turntables of the Night is a DEATH story, but it may be the DEATH in Good Omens rather than the one in the Discworld. Or possibly all the various DEATHs speak in ALL CAPS. The part of this story that haunts me is the way that the narrator describes the seduction of DEATH. Not in the physical sense, but in the emotional and psychological sense. Also the poor narrator is unreliable, because she can’t believe what she saw, but can’t quite convince herself that she didn’t see it.

Once and Future is fun because it turns the tables on the classic Arthur stories, but not until the very sharp twist at the end, which really gets you. I expected something to be different, but not this way. This way was better.

Hollywood Chickens has the answer to the age-old question, “Why did the chicken cross the road?” but the method the chickens use is awesome. And only figured out by inference and observation, in a way that was both cool and funny. 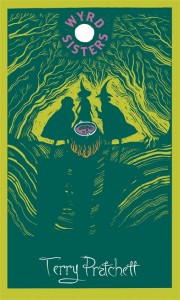 Of the Discworld stories, well, if you have loved any of the Witches stories (start with either Equal Rites or Wyrd Sisters) then The Sea and Little Fishes should not be missed. Nor the deleted extract from the story at the end of the book.

The Sea and Little Fishes showcases the relationship between Granny Weatherwax and Nanny Ogg, and shows just how fearsome “good” can be, especially as embodied by Granny Weatherwax. She is the kind of witch who has become very, very sharply good at being good, because if she went bad she would (and certainly could) probably destroy the world. The problem with being very good is that you often expect other people to follow your example, and are quite obviously cross with them if they don’t. Also Granny not only doesn’t suffer fools gladly, she doesn’t suffer fools at all – to the point where they usually know to stay out of her way. The Sea and Little Fishes is a story about what happens when they don’t.

The deleted extract from this story is equally interesting but different. I can see why it got deleted – it doesn’t further the plot of The Sea and Little Fishes at all. At the same time, it shows just how close Weatherwax and Ogg are, and how well they understand each other, even though they are completely different, both as witches and as people. Nanny Ogg takes care of Granny Weatherwax a lot more than one might expect, and it’s terrific.

The short expositions on (and in) the Discworld are not truly stories, but they are absolutely laugh out loud, chuckle, snort funny.

And they definitely show the author’s signature humor. For a fan, they are worth reading, but they’re not a good place to introduce people to Pratchett’s work.

The Discworld stories are also more for the fans than for people unfamiliar with the author or Discworld. Many of the short expositions owe at least some of their humor to the fact that we already know these people and this place. The Minutes of the Meeting to Form the Proposed Ankh-Morpork Federation of Scouts is definitely of this type. As is A Few Words from Lord Havelock Vetinari.

But for those of us who are fans, this collection is a treat – including Pratchett’s introduction to each story. We shall not see his like again, and he will be sorely missed.

If you have not yet had a chance to discover the wit, wisdom and wonder that is the Discworld, I envy you. There is a marvelous journey waiting for you.

One thought on “Review: A Blink of the Screen by Terry Pratchett”