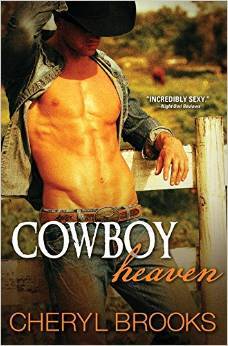 When widow Angela McClure decides to let loose and start a secret affair with a younger ranch hand, she inflames rancher Dusty Jackson’s long simmering desire. Both men are irresistible – and forbidden – so Angela forms a plan to divert her old-fashioned father’s suspicions: flirt with all of “her cowboys.’ The new competition makes Circle Bar K ranch hotter than it’s ever been before… 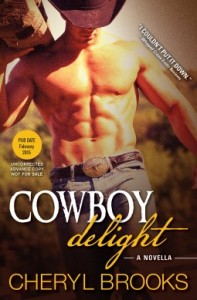 Cowboy Heaven is just plain good, dirty fun. For a good time, find Cheryl Brooks and pick up either Cowboy Heaven or its predecessor, Cowboy Delight.

There’s also a tiny bit of suspense. While it was easy to figure out who the bad guy was, his reasons for being bad and just how far back the badness went were a bit of a surprise.

The story is about Angela McClure. Angela is a 42 year old widow with two sons, a cantankerous father, and a ranch to run. Her husband Cody has been dead a few years, long enough for her to have gotten past her grief and to really miss having a man around just for her. And definitely for sex.

Her kids are away at school. You would think that Angela would have no problem finding someone if she wanted to, but there are definitely a couple of flies in that ointment. Her dad is more than a bit old-fashioned, a lot of hard of hearing, and his health is failing. And it is still HIS ranch. Angela may run it, but Dear Old Dad definitely still owns it. She lives under his roof and has to give at least lip service to what he wants.

The other problem is the ranch foreman Rufus. He has not only lectured the ranch cowboys repeated and with great force that Angela is absolutely untouchable, but it turns out that he fires anyone who even looks her way.

Angela, who is more than passably pretty, feels like she is being smothered. Quite possibly with a nun’s habit. She’s doesn’t know about Rufus’ dictates, and thinks she must be ugly as sin if none of the cowboys will even smile at her.

Then she picks up a handsome hitchhiker, and she learns a whole lot about how much she still needs sex, and how much men want to have it with her. She also uses her new “boy toy” as a spy in Rufus’ bunkhouse, and discovers just how tight a rein the foreman has been keeping on all her cowboys.

The more she inserts herself into the life of the cowboys (and a few of them let her know that they would like to insert themselves into her) the more Angela re-discovers how much fun, and not just the sexual kind, can be had with a bunch of male friends who don’t mind her occasional foul language and can give as good as they get.

And the further Rufus goes off the deep end. When Angela and her new cowboy friends start putting the pieces together, Angela comes to the nasty conclusion that anyone she shows favor to is in deadly danger.

Especially the cowboy that she has been in love with for years. And very definitely vice-versa. Can they get Rufus before he gets them?

Escape Rating B+: For a rip-roaring time, get this book and settle in for a couple of hours of sexy cowboy fun.

But there’s just a bit more to it than that. Angela is a terrific character. I feel for her situation, and absolutely love her bawdy sense of humor. She’s someone I’d love to have drinks with. Or possibly get drunk with.

I also really liked that Angela was a grown-up heroine. She’s 42 not 22. It affects her outlook on life and responsibility. While it was awful to see her as a widow, it was terrific to see her break out of the shell imposed by her Dad and Rufus and find her authentic self, very definitely including her sexual side.

That all the cowboys she gets various levels of involved with are all younger than she is, well that’s an added bonus.

The cowboys as a group are all sweethearts (except Rufus of course). It’s easy to see why a woman might fall in love with any of them – or perhaps all of them. It’s also just a bit heartbreaking when Angela’s lover, Dusty, explains how all of them are misfits, and why they are all happy living in a ranch bunkhouse instead of on their own.

There is one scene that absolutely had my laughing to the point of shaking the bed. Some of the cowboys decide to get into a dick measuring contest, and they want Angela to be the judge. The whole load of double and triple entendres flying around is chortle, snicker, giggle worthy of the highest order.

(I’ll admit, I’ve been to more than a few meetings where I wanted the guys in the room to just cut the crap and get them out and measure them. It would have saved a whole lot of time.)

It would be sweet to see more of those wonderful cowboys get their own sexy HEAs in future books in this series. They deserve it.

Sourcebooks is giving away 3 copies of Cowboy Heaven by Cheryl Brooks. If you are looking for a good (reading) time, enter the giveaway in the rafflecopter.