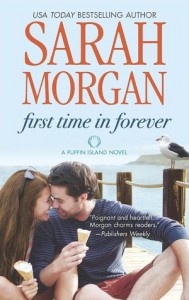 Windswept, isolated and ruggedly beautiful, Puffin Island is a haven for day-trippers and daydreamers alike. But this charming community has a way of bringing people together in the most unexpected ways…

It’s been a summer of firsts for Emily Donovan. From becoming a stand-in mom to her niece Lizzie to arriving on Puffin Island, her life has become virtually unrecognizable. Between desperately safeguarding Lizzie and her overwhelming fear of the ocean—which surrounds her everywhere she goes!—Emily has lost count of the number of “just breathe” pep talks she’s given herself. And that’s before charismatic local yacht club owner Ryan Cooper kisses her…

Ryan knows all about secrets. And it’s clear that newcomer Emily—with her haunted eyes and the little girl she won’t let out of her sight—is hiding from something besides the crazy chemistry between them. So Ryan decides he’s going to make it his personal mission to help her unwind and enjoy the sparks! But can Puffin Island work its magic on Emily and get her to take the biggest leap of trust of all—putting her heart in someone else’s hands?

Get it out of my head! It took me way too long to recognize where I’d heard the phrase “First Time In Forever”, but once I did, I couldn’t get the song from Frozen out of my head. The ear worm is driving me crazy.

At the same time, the song is a perfect descriptor for the story. And also Frozen. It gets damn cold on Puffin Island in Maine in the winter. Not that we experience one during this particular book, but as the series continues, I bet we see at least one snowstorm before we’re done.

Both Ryan and Emily have faced the sudden responsibility of caring for young children at different points in their lives. It provided them with a shared experience, and some of the same reactions to that experience. It means that they understand each other from the beginning of the story, even if they don’t quite see it.

Ryan was forced into adulthood at 13, when his parents were killed in a crash. He became an adult while caring for his younger siblings, including his then 4-year-old sister Rachel. While Ryan was not the responsible adult in the household (his grandmother had custody), she relied on him as if he were an adult, while his baby sister looked to him as the one stabilizing force in her young life.

While he wouldn’t miss the close relationship he still has with Rachel, he did escape the Island the minute he got old enough. He never had the chance to be a teenager, but he did move out to have child-free adventures all over the world as a Pulitzer Prize winning reporter. Then he came home, and started a business on the island.

But his experience raising his siblings gave him a life-long aversion to having children of his own, or even of settling down and getting married. He likes children – they all go home with other people. He just doesn’t want to feel that tied down ever again.

Until Emily arrives on the island. Emily, along with her college friends Brittany and Skylar, came to the island while they were in college. Brittany’s grandmother Kathryn owned a cottage that now belongs to Brittany. All three women vowed to return to the cottage whenever they needed a place to be safe. And Emily needs one now.

She is on the run from the paparazzi that chased her famous sister Lana into a fatal accident. Emily is protected Lana’s 6-year-old daughter Juliet from reporters and cameramen who have invaded her home in search of their “big story”. Juliet is six and traumatized. Emily, who hadn’t seen her sister in years, is now the guardian of a 6-year-old that she never met, and is an instant parent who never planned to have children.

Emily’s last experience guarding a child scarred her forever. She blamed herself for a tragedy that should never have happened, not because Emily screwed up, but because her alcoholic mother left her 6 year old self in charge of her 4 year old baby sister. Emily never got over the result, and never let anyone else into her heart.

Until little Juliet, who she renames Lizzy to protect her from the paparazzi, comes into Emily’s life and steals her heart away, a heart that Emily believed was no longer there to steal.

Lizzy is a good little heart thief – she steals Ryan’s too. But can either of the adults in this trio manage to admit that they love the little girl, and each other?

Escape Rating B: In Puffin Island, the author has created a marvelous place, not without its ups and downs (particularly of the economic variety) but a place where the characters, and the readers, can feel like they belong.

The story starts out because of friendship. The enduring strength of the friendship between Emily, Brittany and Skylar shines every time the women are together, or even talk about each other. They have all found a solace in this family-of-choice that none of the had in their birth families, even though the reasons for that vary wildly.

We don’t even meet Brittany in person, but she is still very much a part of this story. Also, it is her past and her friendship with Ryan that starts his initial involvement, and allows Emily to trust him at the beginning. The absent Brittany serves as much-needed glue, both for Emily’s initial panic and the start of her bond with Ryan.

Speaking of Emily’s panic, it did feel as if Emily was a bit too panicked for too much of the story. She comes into this suffering from a huge childhood trauma that has never been resolved, and is scared to death of the paparazzi. While that last part is a reasonable fear under the circumstances, she was so scared in so many different directions that it was amazing that she functioned at all. It felt a bit like the author piled on her so that she would need Ryan, and then he gets to be her white knight. I might have liked her more if she had one tick less to panic about at the beginning.

There are two secrets that hang around the first half of the story – the nature of the traumatic mess in Emily’s past, and the event that caused Ryan to retreat back to the island to start over. Ryan’s secret in particular felt like it hung in limbo a bit too long, looming over events more than it perhaps warranted. There was a point where I just plain wanted to KNOW already, and then the reveal felt anticlimactic. 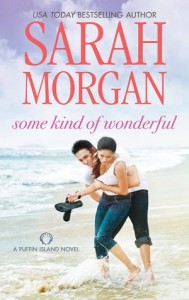 That being said, I enjoyed Ryan and Emily together. Their shared experience of becoming sudden surrogate parents before they were ready was unusual, but it gave them a strong bond. I love the relationship between Emily, Skylar and Brittany, and can’t wait to see more of them, and how their HEAs unfold. Skylar really needs to get a clue and drop the guy she’s with. He’s not a bad person, he’s just bad for her. It’s too bad that the author is saving Skylar’s story for book 3. The next book is Brittany’s story, so it will be great to have her be back to the island in person in Some Kind of Wonderful. (OMG it’s another song title. I feel the ear worm coming in for another turn!)

Thanks to Sarah and BookTrib, one lucky reader will be able to take their own virtual trip to Puffin Island with a copy of First Time in Forever.