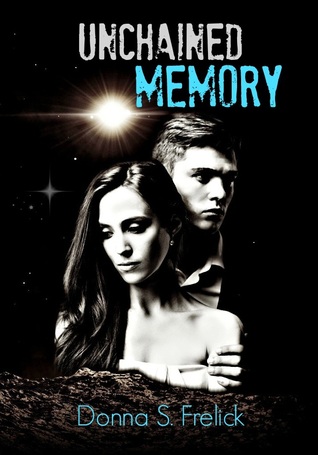 Three hours ripped away her past.
His love promised her the future.

From the night she wakes up in her pickup on the side
of the road, three hours gone and everything of value
lost to her, Asia Burdette is caught in a clash of invisible forces. She has only one ally in her struggle to understand why–Ethan Roberts, a man she shouldn’t love, a psychiatrist who risks everything to help her.

This story has an absolutely fascinating science fictional premise – what if (all SF stories start with some kind of what if?) but what if some of the people who claimed to have been abducted really had been abducted by aliens.

After all, if the universe has half as many habitable planets as some scientists think it does, wouldn’t some of them be populated with nasty, exploitive races who think that humans make great pets – or slaves?

And wouldn’t there be some organizations created to protect this underdeveloped (at least interstellar travel and weaponry-wise) from some of those technologically more advanced, albeit morally equally bankrupt, planets and predators?

Both Stargate SG-1 and Star Trek Voyager exploited this the secondary theme of advanced civilizations brainwashing humans and using them as slave labor, but I haven’t seen a story that takes the first part seriously until now.

Asia Burdette has a girl’s night out with her best friend, but not only stays sober but gets herself on her way back home before midnight. Her three kids are home with a babysitter, and her abusive husband works the night shift.

On the way home, she loses three hours of her life. And in those three hours, her house catches fire and everyone inside is killed. Her children are dead, along with the babysitter, and her husband blames her for her neglect.

She blames herself, too. But she has lost three hours of her life in her truck by the side of the road, and has no idea what happened. She wasn’t drunk, she wasn’t drugged, but whatever happened to her in those three hours, her life as she knew it is over.

Her husband is no loss, but the death of her children is something that Asia can never get over. And she desperately needs someone or something to blame other than herself. Or at least an explanation, not just for the memory loss, but also for her recurring nightmares of a life more hellish than even her own experiences.

After a few years of not much sleep and getting much too close to becoming an alcoholic, Asia tries psychiatric therapy. Her first shrink is a disaster (in more ways than one, as we’ll see later) but her second makes her feel safe enough to let her start getting to the truth.

What isn’t explainable are the nature of the dreams that Ethan uncovers while using an Alpha Wave Inducer. Ethan normally treats people who think that they have been abducted by aliens. Asia doesn’t have any clue what happened to her, but the thought of alien abduction has never entered her sane and conscious mind.

The more that Asia is able to relate of her dreams while under the machine, the more that both Ethan and Asia realize that whatever happened to Asia, it was real – and that it didn’t happen on Earth.

It turns out that the truth isn’t just out there, but it is also in Asia’s head. When Ethan starts looking back at his own case files for the few other patients who had dreams just like Asia’s, he discovers that all of his old patients and their files have gone into a black hole, and that the only way to save Asia is to run.

They don’t know who they are running from, but they are sure they are running for their lives. And they are correct. There are too many people and forces who want to know what Asia remembers, and find a way to exploit it, and her.

The morally bankrupt forces who would imprison humans are not just out in the galaxy – they are right here on Earth and they are after Asia and Ethan. But when the forces of evil are right here, it’s time for the rescue to come from somewhere out there. The question is whether rescue will come in time to save anyone – including the secrets that need to be protected.

Escape Rating B+: I enjoyed this a lot and liked the premise. Because it’s SFR I’m going to get a little bit more into a few issues…

I knew who the bad guy was pretty early on. It wasn’t that he did anything evil at the beginning, he was just slimy. Something wasn’t right about him and there were no other candidates.

This is SFR, meaning that there is a love story mixed in with the SF. I could see the chemistry developing between Ethan and Asia, and I was certainly sold on them falling for each other. At the same time, they meet as therapist and patient. Going from that kind of relationship to a romance is a bit skeevy, even if Ethan isn’t skeevy at all. I fully recognize that this probably happens more than we think it does, but it raises a bunch of red flags for definite reasons.

Yes, I am letting my real world views into my fiction, but when something upsets the willing suspension of disbelief, it takes me out of the fiction.

There’s an X-Files element to the story, that the government is involved in some very shady dealings with some extremely shady people (and not-people) and that what they really want to do is both suppress knowledge of the wider universe and exploit it for gain, or just for bigger and better guns. There’s a bit of Men in Black here too, since the government actively suppresses any knowledge of aliens.

And I felt that there was definitely a look back at episodes of Stargate SG-1 and Star Trek Voyager. So that I keep from spoiling everything, let’s just say that a look at a synopsis of Beneath the Surface in SG1 or Workforce from Voyager will provide a whole lot of clues about where Asia has been, what she was doing and how she got there.

But both of those episodes were awesome, so I was happy seeing something of those stories in a new form. It also means I recognized what was going on the first time Asia has a vision.

The story has the pace and plot of a thriller, definitely one of the X-Files type, except that not only do the equivalents of Mulder and Scully get into a real relationship, but one of them has been a dupe and not an investigator the whole time.

Unchained Memory is a lot of fun, especially if you like “spot the trope” bingo. This is the first book in a series, and I’m looking forward to more science fiction romance fun.