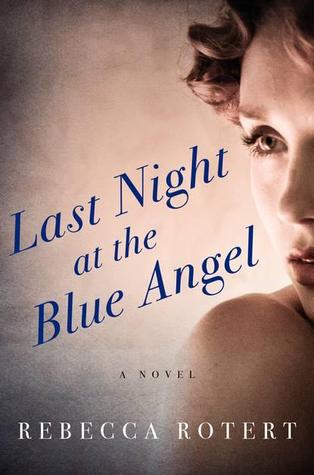 Set against the backdrop of the early 1960s Chicago jazz scene, a highly ambitious and stylish literary debut that combines the atmosphere and period detail of Amor Towles’ Rules of Civility with the emotional depth and drama of The Memory Keeper’s Daughter, about a talented but troubled singer, her precocious ten-year-old daughter, and their heartbreaking relationship.

It is the early 1960s, and Chicago is a city of uneasy tensions—segregation, sexual experimentation, free love, the Cold War—but it is also home to one of the country’s most vibrant jazz scenes. Naomi Hill, a singer at the Blue Angel club, has been poised on the brink of stardom for nearly ten years. Finally, her big break arrives—the cover of Look magazine. But success has come at enormous personal cost. Beautiful and magnetic, Naomi is a fiercely ambitious yet extremely self-destructive woman whose charms are irresistible and dangerous for those around her. No one knows this better than Sophia, her clever ten-year-old daughter.

For Sophia, Naomi is the center of her universe. As the only child of a single, unconventional mother, growing up in an adult world, Sophia has seen things beyond her years and her understanding. Unsettled by her uncertain home life, she harbors the terrible fear that the world could end at any moment, and compulsively keeps a running list of practical objects she will need to reinvent once nuclear catastrophe strikes. Her one constant is Jim, the photographer who is her best friend, surrogate father, and protector. But Jim is deeply in love with Naomi—a situation that adds to Sophia’s anxiety.

Told from the alternating perspectives of Sophia and Naomi, their powerful and wrenching story unfolds in layers, revealing Sophia’s struggle for her mother’s love with Naomi’s desperate journey to stardom and the colorful cadre of close friends who shaped her along the way.

Sophisticated yet poignant, Last Night at the Blue Angel is an unforgettable tale about what happens when our passion for the life we want is at sharp odds with the life we have. It is a story ripe with surprising twists and revelations, and an ending that is bound to break your heart.

There’s a sense that every night brings the same set of crises and triumphs to Naomi’s life and career, at least as it is viewed from the perspective of her 11-year-old daughter Sophia.

While this is in Chicago in the mid-1960’s, it doesn’t feel like the wider world of the city. Admittedly, the early 60s were not the best time in the life of the city, but also, Naomi and Sophia’s world is a very insular one. It’s their small neighborhood around the club, and the collection of friends that they have turned into a family-of-choice.

The story in the present day is told through Sophia’s eyes. She is 11, but in the tight little world created around her mother’s career as a possibly has been but also wannabe famous jazz singer, Sophia is the only child in a world of adults. As all the adults around her enable Naomi, Sophia has become a little adult herself. Her knowledge of the outside world is a child’s knowledge, but her ability to manage her mother’s mood swings, drinking and general using of people becomes more adult by the day. It’s a survival mechanism that has turned her into a little adult much too early.

Interwoven with Sophia’s perspective of the weeks and months leading to Naomi’s last night and last performance at the Blue Angel, we see Naomi’s version of how things got to be the way that they are. It is Naomi’s story, and possibly the one she tells herself, of how she has gathered the collection of people who surround her in 1965. It’s how Naomi Hutnik of Soldier, Kansas became Naomi Hill of Chicago, and all the people she either dragged along with her or pulled into the gravity of her orbit along the way.

Some of it may be objectively true, but it feels as though it’s the way that Naomi has decided to remember her own story of country girl moves to the city to strike it big – even though it takes years, and everyone around her has nearly given up hope.

Sophia, on the other hand, is better off (for certain very unusual definitions of better off) when her mother is still struggling and needs her. When Naomi finally ascends to the stratosphere, she leaves her old life behind – including Sophia.

Even though it is the help and support of the circle she drew in, and casts aside, that finally allows her to become a star.

Escape Rating B+: It is easy to get caught up in Sophia’s story. On the one hand, not a lot happens, until it suddenly does, but at the same time, her young/old perspective reveals a lot about the way she lives, the way her mother is, and what life is like for a child in the years when fear of the bomb was still real.

Sophia lives an unpredictable life of ups and downs – of being the most important person in her mother’s world, and a burden that weighs Naomi down – sometimes in the same day. Everything in Naomi’s world serves Naomi’s art, which means that everyone revolves around attempting to keep Naomi stable and making sure that she gets to the club and sings her heart out.

It’s possible that Naomi doesn’t have much heart left.

It’s certain that the instability of her life makes Sophia fear that it can all disappear in an instant. She projects that fear into her fear of the bomb, but it’s more about the people she loves and the life she knows. That her mother regularly disappears in the emotional sense means that Sophia isn’t wrong to be afraid.

The fascinating part of the story revolves around Naomi’s origin story. Absolutely nothing is as it seems, and no one is quite who they present themselves to be. These truths are revealed slowly and carefully, as Naomi tells her story and constructs the world around her one person at a time. And it all comes together just at the same time it all falls apart.

This is a story about one woman who defied the expectations of her time and gender, but it is also about her equally unconventional daughter, who is already defying the very different social conventions of hers.

If this story sounds appealing, I think you might also enjoy 2 A.M. at the Cat’s Pajamas by Marie Helene Bertino. The time and place are different but the elements of a young girl telling the story of a jazz club feel similar. As I read Blue Angel I couldn’t stop thinking of the Cat’s Pajamas, both about little girls with big stories to tell.

2 thoughts on “Review: Last Night at the Blue Angel by Rebecca Rotert”