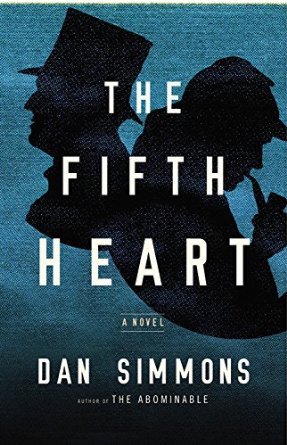 In 1893, Sherlock Holmes and Henry James come to America together to solve the mystery of the 1885 death of Clover Adams, wife of the esteemed historian Henry Adams–member of the Adams family that has given the United States two Presidents. Clover’s suicide appears to be more than it at first seemed; the suspected foul play may involve matters of national importance.

Holmes is currently on his Great Hiatus–his three-year absence after Reichenbach Falls during which time the people of London believe him to be deceased. Holmes has faked his own death because, through his powers of ratiocination, the great detective has come to the conclusion that he is a fictional character.

This leads to serious complications for James–for if his esteemed fellow investigator is merely a work of fiction, what does that make him? And what can the master storyteller do to fight against the sinister power — possibly named Moriarty — that may or may not be controlling them from the shadows?

The Fifth Heart is a lot of things packed into one rather long novel.

It is, first of all, one of the longest Sherlock Holmes pastiches I have ever read. It’s a very good 618 page book. It might have been better if there had been a bit less of it.

It is a historical mystery about the death of one Clover Adams in 1885. Was it suicide, or was it murder? As part of conniving his way into the social circle in which Clover Adams moved, Holmes’ case takes on some aspects of a late 19th century who’s who. Everyone who was anyone seems to have at least a cameo in the story.

It is also a meditation on the question, “What is REAL?” Holmes believes he is a fictional character rather than a real person, and this question haunts him throughout the book. What captured this reader is that his answer is not dissimilar to Margery Williams’ Velveteen Rabbit.

I’ll get back to that.

The story of The Fifth Heart begins in Paris, on the banks of the Seine, in 1893. The very-real author Henry James, and the possibly fictional character Sherlock Holmes are both contemplating suicide. Instead, they embarrass each other enough to bring them both back from the edge.

They have something in common. One of James’ best friends, Clover Adams, committed suicide in 1885. Her brother retained Holmes to investigate her death and the strange calling cards that her close circle has received every year since on the anniversary of her death, claiming that she was murdered. And even though the man who hired him is himself now dead, when he meets Henry James Holmes decides to take up the long-ago case, using the famous author as his assistant and amanuensis in place of Dr. John Watson.

Holmes does this for two reasons – James will give him an easy entree into Clover Adams’ circle, and Watson thinks Holmes died at Reichenbach Falls just two years previously at the hands of Professor Moriarty. Holmes is travelling under the name Jan Sigerson in order to perpetuate this ruse.

Holmes is also struggling with the drug-induced revelation that he has no life outside his cases, leaving him with the conclusion that he is a creation of the writer’s brain and not a real person. When I say, “no life outside his cases”, I do not mean that his life has no meaning to him outside the cases, I mean that Holmes’ perception is that it doesn’t exist at all.

Of course, the idiot has switched from cocaine to morphine to heroin, so he may just be hallucinating. One wonders.

Holmes begins, with a reluctant James at his side, going to Washington DC to investigate Clover’s death. He is also, at the behest of his brother Mycroft and the British government, looking into a spate of anarchist plots and assassinations. It is believed that there will be an attempt on the life of President Grover Cleveland when he opens the World’s Columbian Exposition in Chicago later in the year.

For someone who might not be real, Holmes is a very busy man. He has to foil the plot, find the truth about Clover’s death, keep Henry James out of trouble, and deal with Irene Adler again, all in the space of a few short months.

The mystery of Clover Adams is easy for Holmes, although we don’t necessarily see everything he knows at the time. The foiling of the assassination attempt brings Holmes, along with Henry James, Henry Adams, John Hay and even Samuel Clemens to Chicago just in time to thwart the assassination and unveil the killer of Clover Adams – along with the truth about Moriarty and a secret that Holmes has long concealed.

Holmes just barely manages to prevent the White City, and the whole world, from turning crimson with blood. But is he real? Does it even matter?

Escape Rating B+: I had a hard time figuring out how to rate this book. It is a slow deep dive – at first, you’re not sure it’s going to be worth the time, and eventually, just like Henry James, you are swept into involvement with this incredible cast of characters and the long, slow immersion into the case.

The Five Hearts were all quite real. Henry James, the novelist best known for his classics The Bostonians and The Portrait of a Lady, was part of a salon organized by his friend Clover Adams. The other members of that salon were all well-known if not downright famous. Clover’s husband Henry Adams (the grandson of President John Quincy Adams and the great-grandson of President John Adams was a famous historian. John Hay was Abraham Lincoln’s private secretary and Clarence King was a world-renowned explorer. Clover was the brittle light and the glue that held this band of friends together.

The events of her death as related in The Fifth Heart also mostly follow history. Where they divurge is the identity of the woman who helped discover her body. In history, this woman is not known, but in the novel, she is Irene Adler under a false name, who is covering for the involvement of her son in Clover’s death. Irene’s son Lucan Adler is an assassin, and Clover Adams was a photographer who took too many pictures.

So into this real-life mystery we have the interweaving of Holmes’ greatest mystery – his relationship with Irene Adler and its previously unknown results, as well as Adler’s own reasons for getting herself into this mess in the first place. There are wheels within wheels, some political, but many of a more personal nature.

Holmes speculates on the nature of his own reality while working to prevent the assassination. The progress of the case does resemble the way that Holmes so often leaves his associates in the dark while haring off in a direction that seems random but proves otherwise. The case is intended as a more “truthful” narrative than many of Watson’s as this case does not scruple to name all of its famous participants.

But the question that haunts Holmes throughout this long and sometimes drawn out investigation is the one that concerns his own existence. I likened his ultimate answer to The Velveteen Rabbit. For those who have forgotten this childhood classic, here is the relevant passage:

“What is REAL?” asked the Rabbit one day, when they were lying side by side near the nursery fender, before Nana came to tidy the room. “Does it mean having things that buzz inside you and a stick-out handle?”
“Real isn’t how you are made,” said the Skin Horse. “It’s a thing that happens to you. When a child loves you for a long, long time, not just to play with, but REALLY loves you, then you become Real.”
“Does it hurt?” asked the Rabbit.
“Sometimes,” said the Skin Horse, for he was always truthful. “When you are Real you don’t mind being hurt.”
“Does it happen all at once, like being wound up,” he asked, “or bit by bit?”
“It doesn’t happen all at once,” said the Skin Horse. “You become. It takes a long time. That’s why it doesn’t happen often to people who break easily, or have sharp edges, or who have to be carefully kept. Generally, by the time you are Real, most of your hair has been loved off, and your eyes drop out and you get loose in the joints and very shabby. But these things don’t matter at all, because once you are Real you can’t be ugly, except to people who don’t understand.”

In the end, Holmes concludes that while he may not have initially been REAL, he has become real because so many people have invested themselves in his stories. I don’t believe that he would say that they loved him into reality, because he would not use the word love, but rather, that their belief in him made him real after all.

As far as the story as a whole goes, I feel as if it would have been a tighter story if there had been just a bit less of it. I have the sense that the author may have been trying to mimic the writing style of the late 19th century and Henry James in particular, but I am not certain.

There is a huge parade of real historical figures in the book that feels a bit over the top. I have enough passing familiarity with late 19th century American history that I had heard of everyone except Clarence King. But it is lot of characters to keep straight, and some of one’s immersion into the story relied on knowing who everyone was and what their presence meant.