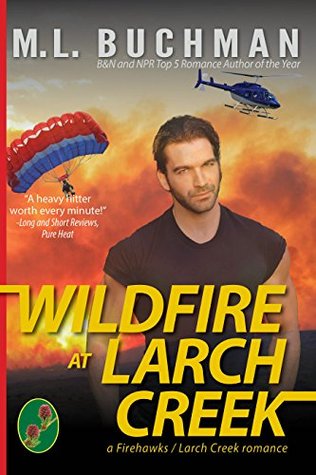 Tim Harada, a lead smokejumper at MHA in Oregon, visits home — the quirky little town of Larch Creek, Alaska. The streets are named for Jack London books, the pickup trucks are all blue, and the residents are all too familiar. One in particular.

Macy Tyler, helicopter pilot. Tim still sees her as his best friend’s kid sister. Before he leaves again, she must convince the guy she’s loved all her life that during his absence she transformed herself into a beautiful, competent woman.

Together they must fight the past and the Alaskan wildfires to create their future after the Wildfire at Larch Creek.

The story in Wildfire at Larch Creek focuses on Two-Tall Tim Harada, the other half of the first stick at Mount Hood Aviation. Being first stick means that Tim and his smokejumping partner Akbar the Great are the best team in the outfit. They jump first into the fire, and organize all the other jumps.

Akbar and Tim are best friends as well as partners, but where they used to spend their on duty time fighting fires together and their off duty time hitting the bars together, things have changed. Akbar found the love of his life in Wildfire at Dawn (reviewed here). Tim is happy for his friend, but feels left out, which of course he is.

When the team gets a week off because of heavy rains in the Pacific Northwest (surprise, surprise) Tim is at loose ends. Hitting the bars alone doesn’t have the same appeal. There just isn’t anyone he wants to spend a week with.

On a slightly crazed impulse, Tim decides to go home. It takes him almost a day of being squeezed in small planes to make it from the MHA basecamp to Fairbanks, then a couple more hours in an SUV with a frozen seat adjustment. Two-Tall Tim has his knees nearly in his ears the whole way.

(The length of his trip is completely realistic. Getting to Alaska takes a lot of time. Getting around takes even more. It makes you appreciate just how big the state is and how far apart everything is.)

Tim hasn’t been home to Larch Creek, Alaska in a long time.Not just because he has so little time off and Larch Creek is a serious pain to get to, but because he left a lot of tragedy behind. Being home reminds him of his best friend Stephen. Stephen died in Afghanistan, but every place in Larch Creek carries too many memories of the fun they had growing up.

While Tim’s parents miss him, the person who hurts the most over his absence is Stephen’s younger sister Macy. The three of them were always together, but now that Stephen is dead and Tim is gone it feels as if Macy lost her brother twice.

Not that she sees Tim as anything like a brother. She’s loved him as long as she can remember, probably her entire life. She knows that Tim has always seen her as a little sister, and he hasn’t been around long enough for that to change.

It’s been ten years since they’ve seen each other, and Macy has definitely grown up. When Tim comes home, he finally realizes that Macy has grown up into a woman that he wants to spend more time with.

But a week is all he has. It seems like they might have just enough time to figure things out, until Tim gets called out to fight wildfires near Larch Creek. As they fall in and out of danger, they are able to see each other as the people they now are, and not just through their memories of the past.

They might even have a future, if they can just figure out how to get around one little problem – Tim fights fires in Oregon, and Macy flies helicopters in the Alaskan bush. The bush is part of her, and she won’t be the same person if she leaves. Can he still be what he is, or more, if he stays?

Do they have enough time to be certain of the most important decision of their lives?

Escape Rating B+: I read this one for fun, and I’m glad I did. It was definitely a whole lot of fun. 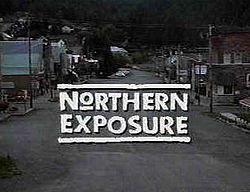 Larch Creek is a very quirky town. And it’s quirky in a very similar way to Cicely, Alaska in the TV series Northern Exposure. Everyone in town is just a bit “interesting”. One of the fascinating things about the town is that it has become an accidental writer’s colony. There are a surprising number of authors in this relatively small population, and they write everything. There’s a paranormal romance author who is old enough to be everyone’s grandmother, and Tim’s own mother writes murder mysteries. But they aren’t the only ones. Tim counts at least 8 writers in a population of 100. Some of them came because they participated in one of Tim’s mother’s writers’ workshops and just stayed, but still, it’s a lot. And an interesting lot – they are a fun bunch.

Tim is a great guy. He’s been sowing his extremely wild oats for a few years, but he is still in his 20s. He’s become the best at what he does through a lot of hard work, and he plays hard in his off time. Watching his best friend happily settle down with a woman who is perfect for him makes the wild oat sowing pall more than a bit. He and Akbar had a lot of fun – without Akbar it isn’t nearly as much fun. Also his friend has paved the way to show that there is a life outside smokejumping. Not that Akbar has quit, just that he is so happy to have someone to go home to and make a life with.

At least some of Tim’s restlessness is that he is starting to want that for himself, even if he doesn’t know it yet.

Macy is a terrific heroine. She is herself pretty darn quirky (When I lived there I said that Alaska self-selects for odd). She has made a life for herself serving her hometown and her state in a way that fulfills her. She’s a bush pilot, a particularly Alaskan thing. She flies helicopters to pick up and deliver the mail to remote villages, and when needed for every other thing that a helicopter might be needed for – including firefighting. She’s self-sufficient because she has to be – if she goes down there may be no way out except to do her own repairs and fly out.

In her small town, she has discovered that there is no one for her. She grew up with all the guys, and knows all their secrets. Even worse, she punched out a prospective groom at the altar during the ceremony. Her reasons were excellent, but it has pretty much dried up the dating pool.

She’s never gotten over her crush on Tim, as much as she is unwilling to admit it. She’s managed to mourn her brother and move on, but Tim is still alive, just completely absent. There’s no closure.

When he comes home it is inevitable that sparks fly. She doesn’t just love him, she’s also angry as hell that he stayed away and they didn’t get to mourn together. When he starts out his visit by attempting to treat her as still a kid and just his best friend’s little sister, she’s angry all over again.

That much anger makes for a lot of sparks. She practically has to club Tim over the head with a clue-by-four to get him to wake up and see her as she is now. And once he does, they spend too much of his visit fighting fires to light the one between them. When they finally do, it’s fantastic.

I have a soft spot in my heart for books set in Alaska. I only lived in Anchorage for 3 years, but it left an indelible impression on me. The local joke is that Anchorage is 40 minutes from the REAL Alaska. This book is definitely set in what people would call the real Alaska – outside the cities of Anchorage, Fairbanks and Juneau. There are a lot of small towns in Alaska that are the size of Larch Creek, or smaller.

The story and setting of this book reminded me of a couple of other Alaska stories. For anyone who remembers the TV show Northern Exposure, Macy has a passing resemblance to the helicopter pilot Maggie O’Connell. The setting of Larch Creek seems like a town that would belong near Dana Stabenow’s fictional Park (which is really Denali) in her Kate Shugak mystery series.

Reviewer’s Note: Having lived in the 49th state, I have one slight quibble. No one local refers to any of the Alaska Interstates by their numbers. The numbers are not displayed. A-4 is the Parks Highway. A-3, which goes through Anchorage, is the Seward Highway, and the stretch of the Seward Highway through Anchorage is one of very few stretches that is actually built to Interstate Highway Standards.

One thought on “Review: Wildfire at Larch Creek by M.L. Buchman”