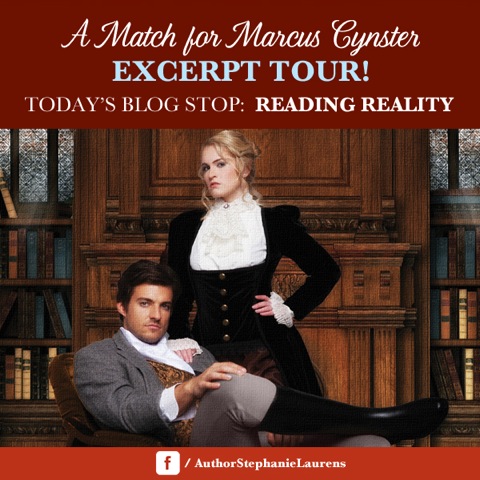 If I haven’t whetted your appetite for A Match for Marcus Cynster with today’s sneak peak review of the book, this excerpt should do the trick. Reading Reality is the second stop on Stephanie’s tour. The first excerpt, which sets the stage for the story, is at From the TBR Pile. For future stops (and more tantalizing excerpts) check out the link to the full tour schedule at TLC Book Tours.

After leaving Oswald tethered with the other horses a little way away, Niniver joined her clansmen in the fold to the south of the narrow ledge on which Nolan was pacing.
Bradshaw, Phelps, Canning, and Forrester greeted her politely. Phelps and Bradshaw had brought their sons. After exchanging quiet hellos and nodding to Sean and the young groom he’d brought with him, she joined the others in studying Nolan.

The rock ledge on which he paced was a little way down from the ridgeline, at an elevation slightly below their position. He strode agitatedly back and forth, half the time turned away from them. They only saw his face when he swung around, yet his attention remained elsewhere; he never looked their way. A stiff breeze was blowing from the northwest, making it unlikely he would hear them even if they called, but the breeze carried his words to them clearly.
She hadn’t set eyes on him for the last week; he’d taken to eating his meals in the library and avoiding all contact, not only with her and Norris but with the household in general. Now, as she looked across the shoulder of the ridge that lay between them, what she saw shocked her.
Over the last months, Nolan had been growing more furtive, his expression more hunted—more haunted. Now he looked like a caricature of a madman, his eyes wild and staring, his hair—once as fair as hers but now lank and dull—standing out from his skull at odd angles. His complexion, normally as pale as hers, was red and blotchy.
Previously, he’d always dressed well—not just neatly but expensively. Now his clothes looked as if he’d slept in them for days.
Even more disturbing was the way he walked—jerkily, abruptly, like a puppet whose strings were being manipulated by some amateur puppeteer, with Nolan himself no longer in control.
As for the words that spewed from his lips…
“You bloody bastard! How was I to know it would be like this? But you knew, didn’t you? You knew, and you never said anything! So now I’m here, trying to cope, and they’re all watching and expecting me to be like Papa and make it all work—and it’s hopeless! There’s nothing there!” Nolan clutched at his hair, gripping and tugging, his face contorting with effort and pain. “Aargh!” He released his grip; Niniver saw several pale strands drift from his fingers.
Nolan’s voice lowered, darker and grating. “I can’t do this. This wasn’t what I planned. I can’t go on pretending, and I’m trapped! Trapped, I tell you!” His jaw set. He ground out the words “This wasn’t how it was supposed to be.”
His tone was ghastly; none of those watching could have had any doubt they were witnessing a descent into madness.
Niniver swept up her skirts and swung toward the path to the ridgeline. The path to the ledge lay ten yards further on.
Ferguson looked at her. “Where are you going?”
She glanced at Nolan. “I’m going to talk to him.”
“You can’t do that.” Canning looked appalled. “He’s beyond reasoning with.”
“I know, but I have to try.” Niniver met Canning’s gaze. “We all know where this is leading, but he is my brother. If I can calm him down, we can all leave and ride back to the manor without a struggle.”
None of the men liked it, but none of them had the right to gainsay her.
She took another step.
Sean moved to follow her. “I’ll come with you.”
She glanced at him. “No. If he sees you, he’ll erupt—you know what his temper’s like. Bad enough he’s in this state—we don’t need that, as well.”
Sean stared at her stonily, every bit as stubborn as she. “We can’t let you face him alone. I’ll hang back if you promise to keep your distance from him.”
She grimaced, but then nodded. “All right. I’ll keep out of his reach.” She turned to the path. The others returned their attention to Nolan. Niniver, along with Sean, glanced at Nolan, too.
Abruptly, Nolan clutched his head with both hands. He pressed hard, the tendons in his hands and wrists sharply defined as he pressed in, his features contorting. Then he hunched, curling in on himself as if in unbearable pain— 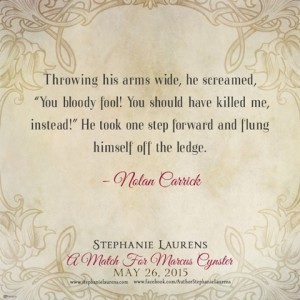 He released his head and straightened. Throwing his arms wide, he screamed, “You bloody fool! You should have killed me, instead!”
He took one step forward and flung himself off the ledge.
Below the ledge ran a deep, narrow, granite-sided crevasse—one of the occasional fissures that, like rocky gashes, scored this landscape.
In the sudden silence, they instinctively froze, then the breeze wafted and they heard a muted thump.
It was the most chilling sound Niniver had ever heard.
Shock held them all speechless.
Until Sean murmured, “Bugger me. The bastard’s killed himself.”
* 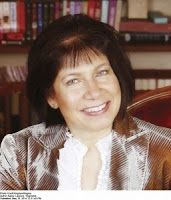 New York Times bestselling author Stephanie Laurens originally began writing as an escape from the dry world of professional science. Her hobby quickly became a career; she has been writing historical romance novels for more than 20 years. Currently living outside Melbourne, Australia with her husband and two cats, she spends most of her days writing new stories in her signature ‘Errol Flynn meets Jane Austen” style.