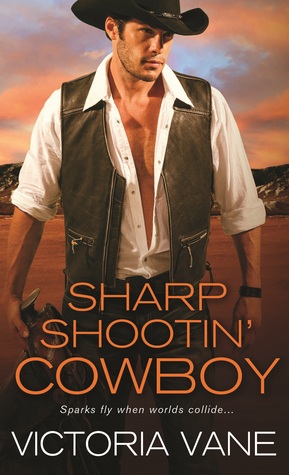 TAKE YOUR BEST SHOT, COWBOY…
A Weary warrior… After eight years as a Marine sniper, war-scarred Reid Everett is back in his native Wyoming. He knows and loves this rugged land, so working for wildlife services to reduce the booming wolf population suits him to a T.

A Caring crusader… Wildlife biologist Haley Cooper is desperate to make a difference. Leaving the world of academia behind, she accepts a position as a wolf advocate to protect the animals she loves.

Raw attraction… Their jobs set them on a collision course, but chemistry sparks like wildfire between Reid and Haley. They’ll have to brave some rough territory if they hope to reconcile their polarizing views with a passion that won’t be denied.

Just like the second book in the Hot Cowboy Nights series (Rough Rider, reviewed here), Sharp Shootin’ Cowboy takes place over several years, as the relationship between Reid and Haley goes through several stops and starts, and is also interrupted by Reid’s tours of duty in Afghanistan.

In this opposites-attract romance, wildlife biologist and conservationist Haley Cooper meets Marine Corporal Reid Everett in a bar near Camp Pendleton just a few days before he is due to ship out. Again.

They meet over a pool table, where Haley both captivates Reid and hustles him. She’s a much, much better pool player than Reid possibly imagines. But the push-and-pull of the game’s fortunes is just a metaphor for the push-pull of chemistry between the two of them.

The timing isn’t right. Not just because Reid is shipping out again before the end of the week, but because Haley just isn’t ready. She’ll still in college, and Reid, while not much older in years, has grown up hard and fast at war.

And they seem to have nothing in common but chemistry. Reid isn’t just a soldier, his family makes its living ranching and hunting back in Wyoming. Haley is almost a caricature of the tree-hugging conservationist – she hates hunting, she’s not thrilled by ranching, she’s a vegan AND she hates Marines. Her sperm-donor father, no name ever given, was a Marine who left her mother pregnant and alone.

Reid and Haley argue about absolutely everything – but they can’t forget each other. Not through another tour for Reid, and college and graduate school for Haley. When they meet again, they finally give in to that explosive chemistry – until Reid’s sister and his ex put themselves in the middle of the fledgling relationship. Haley runs again, and Reid goes back to war.

It’s not until years later, when Haley has grown up a lot more, and figured out what she really believes and isn’t just spouting off cliches and platitudes, that she and Reid get one last chance to figure things out. Dr. Haley Cooper becomes the wildlife conservation agent in Wyoming, near Reid’s ranch. And Reid is back for good, or for whatever might come next.

But they are on opposite sides again, as Reid’s family and friends are trying to beat back what they feel is encroachment on their livelihoods by the wolves who have been reintroduced into the area. Haley, of course, is on the side of the wolves.

She doesn’t know that the biggest wolf of all walks on two legs, and has been manipulating her for the last ten years. It takes a crisis of faith and the long arm of coincidence to get her to see that she and Reid have had the important things in common all along.

Escape Rating B-: Sharp Shootin’ Cowboy is a story that left me with a lot of mixed feelings.

I was expecting this story to tie more closely into the previous books, Slow Hand (reviewed here) and Rough Rider. There is a mention of Dirk’s ranch near the end, but this is a completely separate story and characters – it is not necessary to have read the first two books to enjoy this one.

I liked the second half of the book much better than the first, because when the story reaches Wyoming, Haley and Reid are finally both well into adulthood and are able to operate more as equals. Also Haley is thinking for herself at this point, and is no longer a cardboard cut-out wolf-loving tree-hugger.

Not that she doesn’t still love the wolves she protects, and not that she isn’t still an environmentalist, but her approach is much more nuanced and less party-line spouting now that she more fully owns her own adulthood and opinions.

In the early parts of the story she seemed very naive, and too inexperienced to make a real relationship with anyone, but especially with Reid. Also, with his greater life experience, I kept getting the sense that he thought he knew best and was sure that he just needed to convince Haley to go his way. Even when he’s right, it feels wrong for the start of a relationship that he discounts so many of her thoughts and feelings.

When they meet again in Wyoming, the playing field is much more level. As equals, they are able to find ways to compromise. When the big crisis comes, and it’s a doozy, it exposes both the places in their relationship that they still need to work on, and how much they both care for each other and the land they will make their home.

The way that the author frames the debate about reintroducing wolves into their habitat and the needs of farmers and ranchers to preserve their way of life, gives readers an excellent opportunity to see both sides of the story.

I’m going to be very interested to read the fourth book in this series, A Cowboy’s Whisper, to see where the author takes us next.