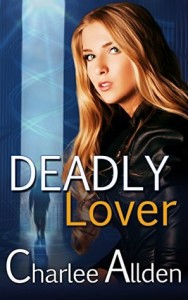 Love can get you killed.

Security contractor Lily Rowan is clawing her way back to normalcy after a training mission gone horrifically wrong left her physically and emotionally broken. She’s returned to the city she grew up in, but not to hide from her nightmares, to face them. Living alongside the Ormney—genetically altered refugees who’ve settled in The Zone—is a daily reminder of the Ormney trainee who nearly took her life. Lily knew it would be tough, but she couldn’t have known coming home would drop her straight into a madman’s deadly game.

Someone is drugging Ormney men and turning them into mindless killers, reenacting the attack Lily barely survived. To stop the killing spree and put her own demons behind her, Lily must overcome her fear and work with Jolaj, a refugee Law Keeper with dangerous secrets and hidden motives of his own.

Jolaj long ago dedicated his life to his people, risking everything to find them a new home. But working with Lily could prove to be the most difficult task he’s ever faced. Despite the Council’s decree making relationships with the outsiders forbidden, he’s finding it hard to keep the courageous Lily at a distance.

With the fragile peace between their people on the line, Lily and Jolaj must stop the horrific crimes before their growing attraction makes them the killer’s next targets.

In the near future, the world is forever altered when the existence of the Ormney is made known. But two things remain the same—serial killers still walk among us and murder is still as ugly and terrifying as ever.

The setting of Deadly Lover reminds me a lot of Sonya Clark’s Trancehack (reviewed here). Both are set in a near future where people who can practice “magic” are locked up in ghettos to keep they away from the rest of the population. When I say “magic”, I’m using the Arthur C. Clarke definition of “any technology sufficiently advanced is indistinguishable from” and not spellcasting.

There’s also a resemblance to the near-future setting of J.D. Robb’s In Death series. Deadly Lover takes place on an Earth that is ahead of us but not terribly far distant in time. The two visions of the future are different in the details, but the worlds aren’t that much different from our own.

In Deadly Lover, that difference has been caused by the introduction of the Ormney people into our midst. The Ormney are humanoid but not quite human – they have a native ability to travel similarly to a Star Trek transporter, but without using a machine. It’s an inborn talent, and some of them are better at it than others. It is also the way that the Ormney traveled from their dying planet to ours. It’s not clear whether their planet was merely far away in space, or in a different space-time continuum altogether.

There’s a certain amount of handwavium on this point, but it doesn’t get in the way of the story.

Also, just for added references, the place that the Ormney go to while they are unsyncing and resyncing feels a lot like the “between’ in Anne McCaffrey’s Pern series. Without either the dragons or the rapey tropes that my friend Cass hates so much.

The Ormney have only been on Earth for 20 years, and interspecies relationships are still very much in the building stage. There is a lot of suspicion and fear on both sides, but not yet much real understanding.

Mostly because the Ormney are keeping a shit-ton of critical secrets.

Lily Rowan has already been exposed to a few too many of those secrets. In her job as a civilian security consultant working for a very secretive para-military research company, Lily was nearly killed when a training exercise went seriously pear-shaped and her Ormney teammate was poisoned and went bat-shit crazy.

Kiq went crazy because he was exposed to a toxin that works one way on humans, and an entirely different way on Ormney. A secret that was known to his people but not revealed until it was much too late.

And then it gets out, as important and dangerous secrets inevitably do.

The moment that Agent Lily Rowan is cleared for duty, she finds herself in the middle of a crime in progress – yet another Ormney is exhibiting the same symptoms as her training partner, and she is forced to kill him to protect civilians from his murderous rampage.

No good deed goes unpunished. Lily finds herself assigned to investigate the incident, and the series of dead bodies, both human and Ormney, that follows in its wake. Too many elements of the case mess with Lily’s peace of mind. The police detective assigned to the case is her estranged cousin. The chief human diplomat for Ormney-human relations is her ex-fiance, and the chief investigator from the Ormney side is a man that Lily finds all too compelling.

But Ormney have no interest in human females. Or is that another half-truth that the Ormney have allowed humans to believe? And is that the secret behind the rash of murders, or is it something even more deadly?

Escape Rating B+: This is a compelling story. I loved the way that the secrets were revealed slowly and carefully, because there are so damn many of them and they are at the root of this case.

However, at heart this is a romantic suspense story. What Lily has to do is investigate a series of murders, and figure out who the serial killer is, with the help of other officers who just so happen to be family.

Along the way she falls in love with her investigating partner, a man who should be off limits but isn’t. Jolaj, the Ormney Law Keeper who works with Lily, is not just a fascinating character but everything we learn about the Ormney culture adds depth to him and his side of this story.

Some of the more interesting aspects of the story were on Jolaj’ side of the equation – how much to keep secret, how much his people should adapt and assimilate, how much they should keep themselves separate, apart and isolated. Jolaj finds himself caught in the middle.

But it would have been relatively easy to remove the science fictional elements of this story and still have an interesting tale of romantic suspense. Especially when we discover that the villain is a peculiarly human kind of murderer – a psychopath who has been practicing his technique for every bit as long as the Ormney have been on Earth. They aren’t his real target, they are just an excuse for more and bloodier killing.

I will confess that I was lured by the red herring, and didn’t figure out who the real killer was until the protagonists did. Being along for the ride kept me flipping pages fast until the very end.