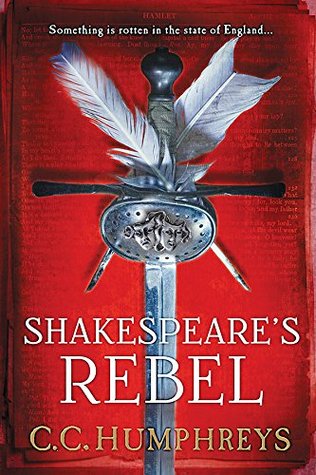 To be (or not to be) the man to save England
England’s finest swordsman and fight choreographer at the magnificent new Globe Theatre has hit rock bottom. John Lawley just wants to win back his beloved, become a decent father to his son, and help his friend William Shakespeare finish The Tragedy of Hamlet, the play that threatens to destroy him.
But all is not fair in love and war. Dogged by his three devils—whiskey, women, and Mad Robbie Deveraux—John is dragged by Queen Elizabeth herself into a dangerous game of politics, conspiracy, and rebellion. Will the hapless swordsman figure out how to save England before it’s too late?
Brimming with vivid periodic detail, Shakespearean drama, and irresistible wit, Shakespeare’s Rebel is a thrilling romp through the romantic, revolutionary times of Elizabethan England that will delight historical fiction fans and Shakespeare enthusiasts alike.

Shakespeare’s Rebel is the most fun I have had with William Shakespeare since I read Elizabeth Bear’s Ink and Steel and Hell and Earth.

The books are nothing alike. Bear’s Promethean Age is urban fantasy, while Shakespeare’s Rebel is historical fiction, but the use of Shakespeare and his playwriting as setting, motivation and sometimes “magical” impetus, for certain select uses of the word magic, has the same feel.

Shakespeare’s Rebel is the story of John Lawley, someone who did not exist but should have. Lawley is a player in Shakespeare’s company. In the story, Lawley is the person who coordinates the fight scenes for all of the plays. But he’s also one of the preeminent swordsmen of his times. In the story, he has also had the fortune to be a boon companion of the Earl of Essex during his famous victories, and unfortunately for Lawley, along for the ride during Essex’ most infamous defeats.

Lawley even sailed with Sir Francis Drake as a translator on Drake’s famous voyage around the world. But that was due to the other salient fact about Lawley – he is half native American. For those of us who have read the author’s French Executioner (reviewed here), Lawley is the grandson of Jean Rombaud, the French executioner who killed Anne Boleyn.

Everything about Lawley’s past has an influence on the two years of his life riotously explored in Shakespeare’s Rebel. The year is 1599. Queen Elizabeth I, sometimes known as Gloriana, is still on the throne of England, but her reign and her life are coming to their natural end. Plots and counterplots are swirling, as men vie to make their place in the next government, even though talking about that future is considered treason. Elizabeth is dying, but mentioning that aloud in the wrong company is enough to put one’s head on a pike at Traitor’s Gate.

In 1599 Elizabeth is involved in what will be her last romantic relationship, her indulgence of Robert Devereux, Earl of Essex. In the story, it is mostly romance of the chivalric sort, where a knight worships a lady fair who is unattainable and unobtainable. What their relationship was in real life is anyone’s guess. But in real life, Elizabeth’s favor for “her Robin” set Essex in rivalry with Robert Cecil, her privy secretary and prime minister. That rivalry pushes our hero, John Lawley, hither and thither as multiple factions attempt to use his friendship with Essex. And eventually, it makes the beginning of his fortune.

So we start with John Lawley, who is a soldier, a sailor, a translator, a player (read actor) and an alcoholic of the binge-drinking type. We begin our story with him as he starts drinking himself sober after a month-long debauch that has him ending up in the worst part of London, bitten by fleas and about to have his last remaining possession get stolen.

He pretty much has nowhere to go but up from here. Following him as he rises and sinks and rises again takes us on a rollicking adventure through the stews of London, the intrigues of the palace, the wilds of Ireland, and back again to Shakespeare’s famous Globe Theatre.

All John Lawley wants to is to survive with his skin intact, his love at his side, and their son happily following the acting profession they both love. And every faction on every side, as well as his own constant need for a drink, seems determined to pull him down before he wins through.

The adventure is glorious!

Escape Rating A+: I didn’t think I would finish this in one night. It’s 400+ pages long! But once I settled in, I couldn’t stop, because the story doesn’t either. It trips fantastically from one wild adventure to the next, with barely a stop for breath – either the reader’s or Lawley’s.

Like his grandfather before him, John Lawley has more lives than a cat, and seemingly uses them all up. He is also, like most players, much, much cleverer than the high-and-mighty lords give him credit for.

Lawley is caught between two friendships – William Shakespeare and Robert Devereux, Earl of Essex. He’s known both men 20 years or so, and they are both subject to fits of extreme melancholy. In modern terms, they both seem manic-depressive. And Lawley has a knack for getting them each out of their depressions, a knack which everyone wants to use.

With Essex, it is a matter of pointing the man in the direction of something that can be done, and then helping to make it happen. So many things go wrong when Essex is left to his own devices, which is what finally does him in.

Shakespeare suffers from depression after each play is complete, until another fever of inspiration takes hold in his brain. And the play that he is writing in fits and starts during this entire book is Hamlet, a play based on a story guaranteed to depress everyone.

Lawley has been reacting his whole life. He lets Essex sweep him along in multiple adventures, many of which have resulted in Essex swanning away while Lawley rots in prison. He reacts by falling into a binge all too often. At least with Shakespeare, their using of each other is somewhat mutual, Shakespeare gets a good actor, Lawley gets a good play to act in. Also Shakespeare doesn’t want anything more than a friend, where Essex requires a sycophant.

But the part of the story that keeps the reader on the edge of their figurative seat is the way that the insane politics of the time keep messing up Lawley’s life. Essex wants his good luck charm, but Cecil wants to find a way to bring Essex down. The Queen wants to maintain her illusions of beauty and immortality.

Everyone wants to use Shakespeare and his company of players to sway the crowd to their point of view. And all the players on every side, both political and theatrical, think that Lawley is the person they need to pressure someone into doing things their way.

All Lawley wants is the life he should have had, marriage to his beloved Tess and helping their son Ned grow into an actor. As the story goes along, the reader wonders if it is just a pipe dream, or how many will have to die to make it happen. That we think Lawley has a chance of achieving his desires, in spite of his own failures, makes him a fascinating character to follow.

I loved every minute of his journey. If you love raucous, riotous, swashbuckling historical adventure, you will too.

As a reader, I am eternally grateful to Sourcebooks Landmarks for bringing C.C. Humphreys’ books to the U.S. I’ve read many, and loved every one of them. For your chance to share the adventure with an awesome C.C. Humphreys’ book bundle, just fill out the rafflecopter below.