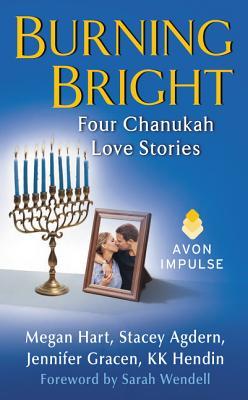 This December, take a break from dreidel spinning, gelt winning, and latke eating to experience the joy of Chanukah. When you fall in love during the Festival of Lights, the world burns a whole lot brighter.
It’s definitely not love at first sight for Amanda and her cute but mysterious new neighbor, Ben. Can a Chanukah miracle show them that getting off on the wrong foot doesn’t mean they can’t walk the same road?
Lawyers in love, Shari Cohen and Evan Sonntag are happy together. But in a moment of doubt, he pushes her away—then soon realizes he made a huge mistake. To win her back, it might take something like a Chanukah miracle.
When impulsive interior designer Molly Baker-Stein barges into Jon Adelman's apartment and his life intent on planning the best Chanukah party their building has ever seen, neither expects that together they just might discover a Home for Chanukah.
All Tamar expected from her Israel vacation was time to hang out with one of her besties and to act like a tourist, cheesy t-shirt and all, in her two favorite cities. She definitely was not expecting to fall for Avi, a handsome soldier who’s more than she ever dreamed.

In the avalanche of holiday romances that arrives every November and December, I seldom see anyone like myself. Why? Because there is a dearth of Hanukkah romance in the middle of all the Christmas. And just like the heroines in this collection of Hanukkah romances, I’m Jewish. It was beyond marvelous to read romances that reflected some of my experience, where the cultural background is the one that I remember from my own family. So for that alone, this collection is a marvelous collection of Hanukkah lights.

But these are also terrific love stories, and anyone looking for something slightly different in their holiday romance will certainly find someone and something to love in this bunch of treats. Or bag of chocolate Hanukkah gelt.

My favorite story in the book is the first one, Miracle by Megan Hart. It’s a love story, and it is also a story about finding your own path, even if it is not the one that other people think you should follow. So it’s a story about growing up and breaking away. Ben has moved to Harrisburg, PA of all places, in order to get away from his ultra-orthodox religious community back in New York. While it is impossible to grow up in the U.S. without some exposure to popular (and Christian) culture, Ben’s community in NYC was as isolated in its own way as the Amish. Popular culture was something forbidden, and something that happened very much on the outside of the insular and insulated community. But when the girl that Ben was supposed to marry falls in love with his best friend, Ben takes the opportunity to escape a life that doesn’t fit him. He wants to travel, he wants to experience the entire world, and he doesn’t want to take over his father’s kosher grocery store chain. He isn’t sure what he wants for his life, but he wants a wider world than the one he has experienced so far.

In Harrisburg, he meets Amanda. While Amanda is also Jewish, she has grown up in the wider and predominantly Christian world. In Amanda’s life, while she is proud of being Jewish, she has also experience some anti-Semitism and has the experience of being a minority where most people she meets are different from herself. Ben often seems critical because she does not act the way that he was brought up to expect “good girls” to act, while at the same time he is definitely attracted both to her and the adaptation to the world as a whole that he craves. When his father shows up at his doorstep in an attempt to guilt Ben into returning home, Ben is caught between the life he had, and the life he wants with Amanda.

In both A Dose of Gelt by Jennifer Gracen and A Home for Chanukah by Stacey Agdern, while the details in the stories are different, the theme is the same. In both stories, the couple are negotiating the shift from friends and lovers to lovers and partners. And in both cases, there is a huge bump in the smoothness of that road. In Gracen’s story, Evan and Shari have been lovers for several months, long enough for both of them to think seriously about the future. But they are both lawyers, and Evan in particular is a divorce lawyer. He has soured on marriage so much that he isn’t sure he will ever want to enter that institution for himself. When he brings Shari home for the holidays, his unwillingness to ever marry runs headlong into his family’s desire for him to settle down with Shari, and Shari’s coalescing thoughts that someday she would like to marry and have children, and that she would like her someday with Evan.

The relationship between Jon and Molly in Agdern’s story is much newer than the one in A Dose of Gelt, but hits similar rocky shoals. Jon invites interior designer Molly to turn his empty apartment into a place he will feel at home – but when he comes back from a business trip and sees what she has done, he feels invaded and exposed, and pretty much shoots the messenger, meaning Molly. It takes a lot of appropriate groveling and some very pointed nudging from Jon’s family and Molly’s friends to get Jon to see the light. Or lights.

KK Hendin’s story, All I Got, gave me a bit of trouble. I liked the happy ending, but getting there was a bit confusing. Tamar returns to Israel for Winter break, and meets a handsome soldier. She falls in love, but keeps her feelings to herself, knowing that she has to return to the U.S. to fulfill her college scholarship. That handsome soldier, Avi, finds a way to follow her to the States, so he can discover if what they feel for each other is real. The story is told from Tamar’s first person perspective, with lots of inserted quotes from either her friends or from others who have written about the experience of traveling to or living in Israel. The quotes are fascinating, and Tamar’s story is lovely, but for this reader they didn’t blend together well.

Escape Ratings:
Miracle by Megan Hart: A-
A Dose of Gelt by Jennifer Gracen: B
A Home for Chanukah by Stacey Agdern: B+
All I Got by KK Hendin: C+

The authors are giving away a $25 Gift Card to the bookseller of the winner’s choice: